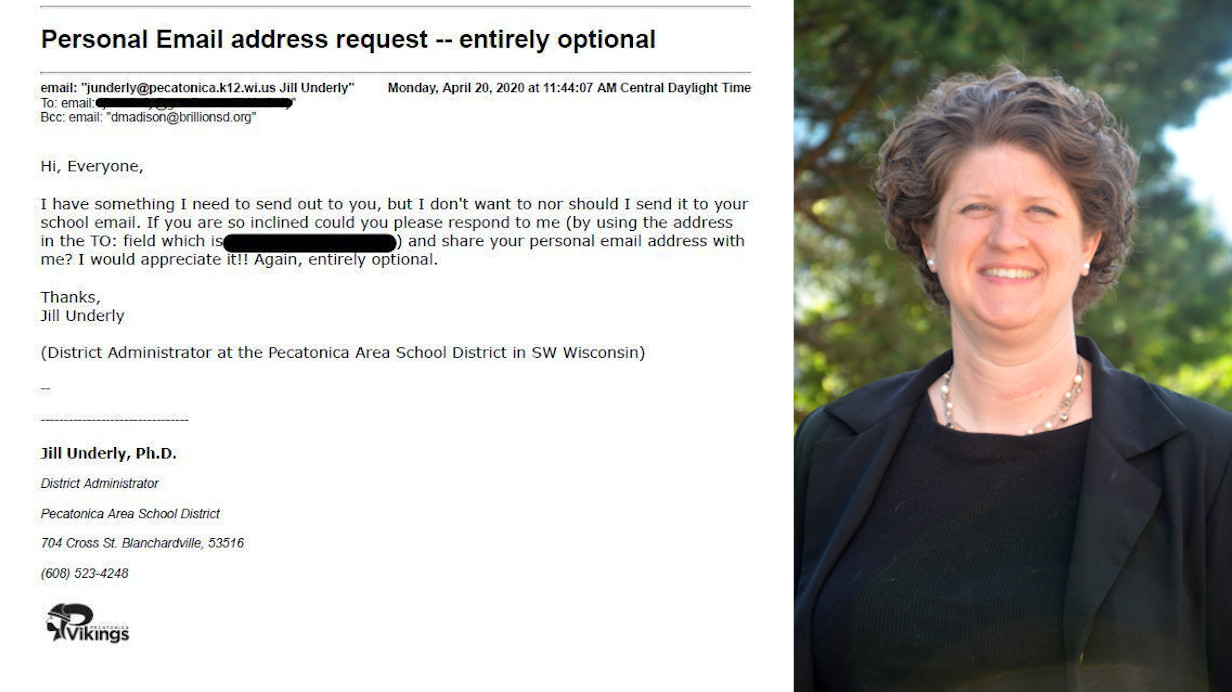 Wisconsin has always been proud of both its progressivism and commitment to good government, yet it now faces a choice: When it becomes clear that a progressive has willfully broken laws designed to ensure good government, what will it do?

Emails released over the past few days prove that State Superintendent candidate Jill Underly used her official government account while on government time last year to build support for her nascent campaign.

This is a direct and obvious violation of Wisconsin Statute § 230.40, which prohibits campaign work on state time and is punishable by jail time.  A decade ago, this sort of thing led to a massive John Doe investigation into the Milwaukee County Executive’s office.  Two decades ago, it formed the basis of a Caucus Scandal that saw legislative leaders from both parties convicted of felonies.

The Wisconsin State Journal, which first broke the story on Friday, hasn’t followed up on Underly’s apparent crime at all, and no other print or television outlet has picked up on the story.  Instead, they are content to run puff pieces touting the fact that Underly raised 16 times more money than her opponent, Deborah Kerr.

Only the Republican Party of Wisconsin, which filed a complaint with the Wisconsin Elections Commission this week, has treated Underly’s behavior with the seriousness it deserves.  Even this doesn’t go far enough.  Campaigning on public time isn’t just an elections issue; it’s a crime.

Wis. Stat. § 230.40 holds that “no person holding a position in the classified civil service may directly or indirectly solicit or receive subscriptions or contributions for any partisan political party or any political purpose while on state time or engaged in official duties as an employee.”

At 11:44 am on April 20, 2020, Underly used her official Pecatonica Area School District email address to solicit the support of other superintendents as she prepared to officially announce her run for State Superintendent.

“I have something I need to send out to you, but I don’t want to nor should I send it to your school email,” she wrote, demonstrating an understanding that the request she was making was at the very least unethical.  “If you are so inclined could you please respond to me…and share your personal email address with me?”

A number of the recipients of this unsolicited email were understandably confused and, thinking Underly’s account had been hacked, called the school district to make sure everything was okay.

“I didn’t know how to ask for your personal email without being all vague,” Unerly clarified in a follow-up email from her official account at 12:45 pm. “Please don’t call my school district asking about it–this isn’t a spam message. I will send you more information, but it’s regarding the state superintendent race and I didn’t want to send it over district emails.”

Again, Underly seemed to understand that this sort of campaign-related activity over public email was wrong.  So too was doing any campaign activity (whether or not it was done through a public account) on public time.

“No person holding any position in the classified civil service may during the hours when on duty engage in any form of political activity calculated to favor or improve the chances of any political party or any person seeking or attempting to hold partisan political office,” Wis. Stat. § 230.40 continues.

The following morning at 9:45 am—also during hours when Underly was on duty—she sent a follow-up email to the superintendents informing them that she was running for State Superintendent and that she was seeking their endorsement.

“I know that you will promote the best candidate who is pro-public schools and has the best intentions and will advocate for all public school children and children in Wisconsin,” she wrote, before adding in a postscript that indicated yet again that she knew such solicitation was wrong.

“PS: Please do me and yourselves a favor and don’t communicate with me or anyone else about this election on school district emails or servers.  I may have been risky in asking for your personal email via your school email, but I couldn’t think of any other way, and besides there was no money asked :)”

It wasn’t just risky; it was illegal.  Just ask Kelly Rindfleisch and Darlene Wink, two aides to Milwaukee County Executive Scott Walker who in 2011 were criminally charged with misconduct in public office for doing campaign work for Walker’s gubernatorial campaign on public time.  The John Doe investigation into political activity in Walker’s County Executive office dominated headlines for months and resulted in both Rindfleisch and Wink pleading guilty and Rindfleisch even serving a six-month jail sentence on home confinement.

In 2001, one of the biggest political scandals in Wisconsin history exploded when it was discovered that employees of four state agencies were doing political work on the clock.  Story after story dominated the news cycle, and eventually the Caucus Scandal led to criminal charges against Democratic Senate Majority Leader Chuck Chvala, Republican Assembly Speaker Scott Jensen, Majority Leader Steve Foti, and Representative Bonnie Ladwig.  All but Jensen served jail time.

This was a time when Wisconsin was apparently more concerned about preserving its reputation for honest governance, though, and it actually prosecuted the misuse of public resources.  Does Underly’s violation of law similarly rise to the level of misconduct in public office?

In Underly’s first email, she wrote that she didn’t “want to nor should I send [a solicitation of support email] to your school email.”  This indicates that she knew such an action was forbidden by law to do.  She did it anyway.  In her third email the following day, she acknowledged that she “may have been risky in asking” for personal emails through official government email correspondence, but “besides there was no money asked :)”

This demonstrates that she understood a solicitation of campaign contributions through government email while on government time was wrong, and while she seemed to think it okay to solicit endorsements, she did recognize that her behavior was at best legally ambiguous.

These three emails alone may not support a prosecution for misconduct in public office, but since they occurred at the beginning of Underly’s campaign and reveal both an understanding of and willingness to break laws prohibiting campaigning on public time, a full criminal investigation into just how much campaign work she did—or potentially had subordinates in the Pecatonica School District do for her—over the following year.

It is therefore incumbent upon not only the Wisconsin Elections Commission, but also local law enforcement in the Blanchardville area (where the Pecatonica Area School District is located) to launch investigation into Underly’s campaign activity.

After all, Wisconsin does still care about this sort of thing, doesn’t it?