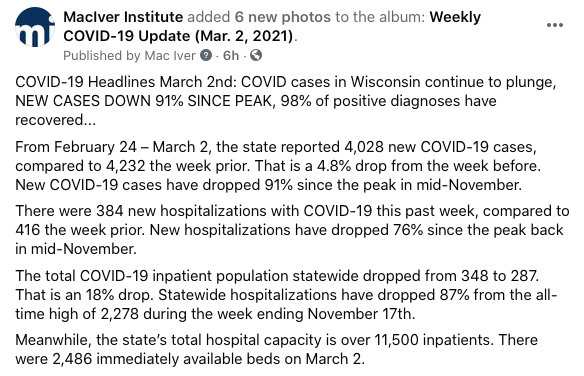 Dan O’Donnell dives into the data to demonstrate that it appears the COVID pandemic may be starting to subside. So why are Governor Evers and President Biden failing to recognize this reality?

Don’t look now, but COVID-19 rates are crashing faster than the narrative that American society needs to remain closed.  In both Wisconsin and across the country, new infections, hospitalizations, and deaths have all dropped precipitously since their highs late fall and early winter, yet public policy remains frustratingly the same—and very well could be until the end of this year.

Only 2.1% of #COVID19 tests in Wisconsin come back positive according to @DHSWI. This is the lowest positivity rate since last March 10th, before the public health emergency began. #WIright pic.twitter.com/ZlYArXmS3n

Wisconsin appears to have hit its peak in mid-November, when the 7-day average of new daily cases hit 6,850.  This week it dropped more than 91 percent to an average of just 610 case per day over the past week.  On November 17, the state hit a high with 2,277 COVID patients in the hospital and a total of 431 in intensive care.  On February 28, hospitalization numbers dropped nearly 88 percent to 290, while ICU patients dropped 83 percent to just 73.

COVID-related deaths, too, have cratered from a high of 128 on January 28 to none on either February 28 or March 1.  This is somewhat misleading since deaths are often not counted until after a weekend, and there were 28 deaths reported on March 2.  This represents a 78 percent drop from January.  A better metric for measuring deaths is the 7-day average since the number of daily deaths is somewhat random, and Wisconsin hit a high of 61 deaths per day on December 7.  Today, that 7-day average has dropped 67 percent to 20 per day.

#COVID19 cases in Wisconsin have dropped 90% since mid-November. pic.twitter.com/pALMzdiIiM

This trend fits with the national statistics, which show that COVID-19 cases, hospitalizations, and deaths have all fallen off of a cliff since their highs in early January.  Total cases dropped 81 percent from their high on January 8 to Monday’s total of about 56,000.  The 7-day average, meanwhile, has dropped 74 percent.  The 7-day average number of hospitalizations has dropped 61 percent from its high on January 13.  Deaths are down 39 percent.

All of this is undoubtedly good news, as it suggests that the worst of the pandemic is past.  Policymakers at both the state and national level, though, are largely refusing to change course.

“My hope is by this time next year, we’re going to be back to normal and before that [is] my hope,” President Biden said Tuesday…while announcing that by the end of May every American who wants a COVID vaccine would be able to get one.

.@GovEvers says you’ll be wearing a mask throughout the summer. #COVID19 restrictions might be lifted by Christmas. #WIright pic.twitter.com/7ZFmiAJ4p4

So why is the President talking about keeping the country at least partially closed when all of the available data suggests that the country can reopen much earlier?  One researcher with the Johns Hopkins Bloomberg School of Public Health even believes that the United States might achieve what’s known as “herd immunity” within the next couple of months.

“It does look like, based on the current trajectory, that come April or May, we’re going to start seeing very low background levels of infection,” Dr. Marty Makary said last week.

The combination of increasing vaccination rates with more natural immunity from prior infections will at some point all but eliminate COVID-19 as a major public health threat.  This day seems to be coming sooner rather than later, but here in Wisconsin, Governor Evers is openly talking about extending his never-ending public health emergency (and the mask mandate that goes along with it) until Christmas.

This stands in stark contrast with Mississippi, whose Republican Governor Tate Reeves just repealed his state’s mask mandate and Texas, whose Republican Governor Greg Abbott ended his state’s mask mandate and business capacity limits.  Texas’ 7-day average of new cases is down 66 percent from its peak in early January, while Mississippi’s is down nearly 76 percent.

Neither of these states even comes close to Wisconsin’s 91 percent drop, but their Governors recognize what Governor Evers and President Biden do not: America can and should start to reopen.  New cases are plummeting, and hospitalizations and deaths along with them.  The data couldn’t possibly be clearer.  The science, as they say, appears to be settled.