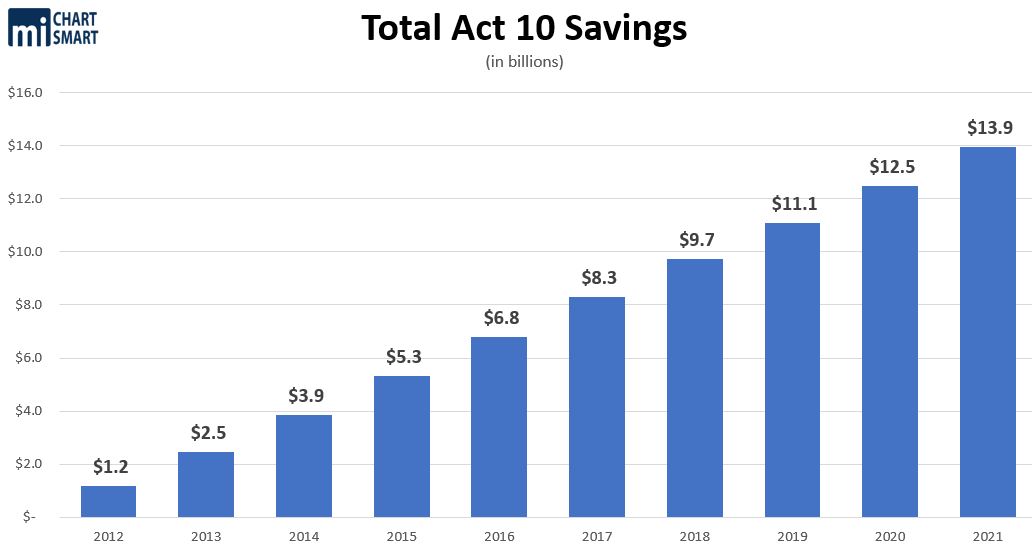 Ten years ago, Wisconsin was in a dire financial situation.

Wisconsin had a $156 million budget deficit, and the upcoming 2011-2013 budget was starting off $3.6 billion in the hole. That didn’t include $1.5 billion the state owed to the federal government for an unemployment benefits loan.

During previous budget cycles, the state had stolen money from segregated accounts like the transportation fund and the patients’ compensation fund to plug holes in other areas. It raised taxes and fees. It got a one-time wind fall from the federal stimulus act. All of those were temporary – and sometimes illegal – solutions.

“The reality is that we have to get this current budget, the soon to be forthcoming budget, and budgets for decades to come in line,” Gov. Scott Walker said on Feb. 11, 2011. “We can no longer kick the can to the future.”

It limited collective bargaining for public sector unions to just base salary and wages. Those unions needed to be recertified every year by at least 51% of represented employees. It ended dues check off, which automatically deducted union dues from government pay checks.

Public employees would be required to pay for 12.6% of their health insurance premiums, and pay for half of the contributions made to their pension funds.

Act 10 didn’t just fix the state’s financial problems. It also gave local governments and school districts the tools they needed to keep their budgets balanced. Previously, most school districts were required to buy health insurance through the state teachers union. After Act 10, they were allowed to shop for the best deal.

Act 10 has now been in place for ten years, and it continues to save the state and local governments hundreds of millions of dollars every year.

Tracking health insurance savings throughout the state is more complicated. There are thousands of local units of government and some Act 10 savings at the local level go unnoticed and unpublicized. Act 10 permanently changed the trajectory of those local healthcare costs. Local governments like the City and County of Milwaukee include that information in their annual budgets – and the savings continue to grow exponentially.

Using the same methodology that has always been used and the same public data sources, our new analysis shows that local governments have saved $2.4 billion, the state and university system have saved $1.2 billion, and school districts have saved $1.3 billion over the past nine years on health insurance.

Ultimately, Act 10 finally put the State of Wisconsin, local governments and school districts back on a solid financial footing.  More importantly, Act 10 ultimately put Wisconsin taxpayers back in charge of our government and back in control of our future. 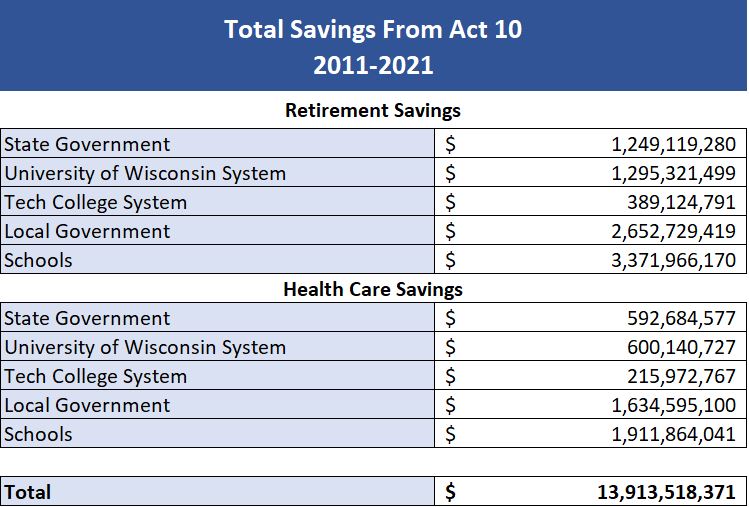