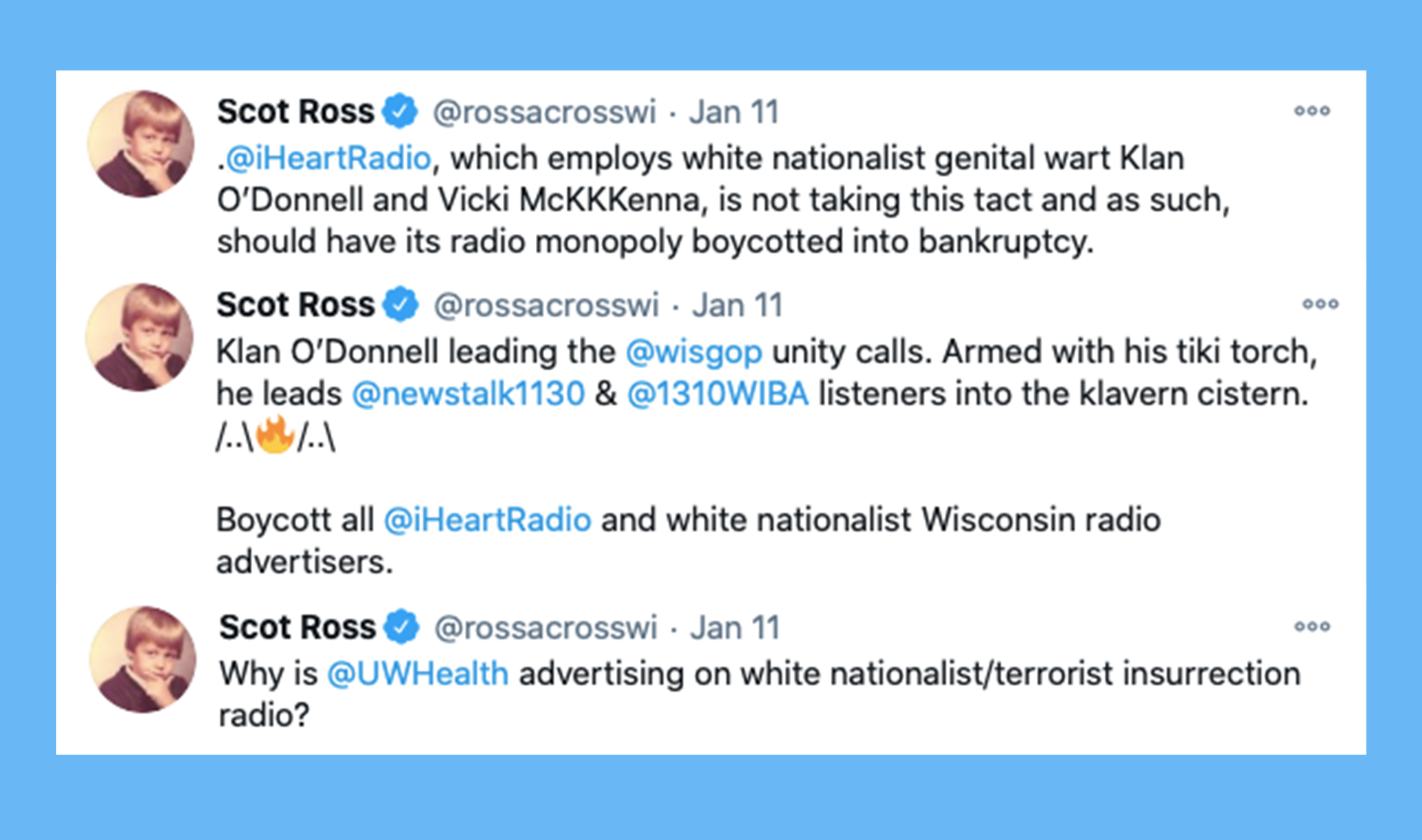 Unless his name is Jim Acosta, the last thing any reporter wants to do is to make himself part of the story.  As both a columnist here at the MacIver Institute and a talk show host on News/Talk 1130 WISN in Milwaukee and 1310 WIBA in Madison, I pride myself on keeping the issues ahead of my own ego.

Put another way, I am never the story; the story is the story.

This week, however, I regret that the story is an egregious abuse of government power that strikes to the very heart of our rights as a free people and was committed against…me.

On Monday night, I became aware of a series of tweets by Scot Ross, a noxious member of the Wisconsin Ethics Commission, calling for a boycott of both my radio show and the stations on which it runs.

Ross, who has for years tweeted the most vile, hateful, truly deranged things imaginable at pretty much every Wisconsin Republican, started using his position on the Ethics Commission in an effort at getting me off the air.

A Twitter follower had to let me know what Ross had tweeted because, like the true coward that most tin-pot authoritarians really are, Ross never tags me in any of his deranged screeds about me so I (like thankfully most sane people) never see his filth.

“Klan O’Donnell leading the @wisgop unity calls,” he added, again not tagging me and even going so far as to screenshot a tweet of mine that he was quoting instead of quote-tweeting it (meaning that I would be less likely to see it).  “Armed with his tiki torch, he leads @newstalk1130 and @1310WIBA listeners into the klavern cistern.  Boycott all @iHeartRadio and white nationalist Wisconsin radio advertisers.”

On top of this, after one of his followers tweeted him a list of advertisers on the two radio stations, he actively pressured one of them—UW Health—to drop their commercials.

“Why is @UWHealth advertising on white nationalist/terrorist insurrection radio?” he asked, tagging UW Health’s account to ensure that officials with the system would see it.

What Ross is doing is the height of unethical, unconstitutional, and unhinged behavior. Moreover, it potentially rises to the level of misconduct in public office.

This tactic is well-known to everyone in the talk radio industry, and it is very rarely successful, but this is quite possibly the first time in American history that it is being directed by someone in government using the power of their position to give more weight to their effort at silencing dissenting opinions.

Because of this, it is also quite possibly the single greatest abridgement of the right of a free press that Wisconsin has seen in a long time.  The First Amendment of the United States Constitution provides that “Congress shall make no law…abridging the freedom of speech, or of the press,” While Article I, Section 3 of the Wisconsin Constitution prohibits government action that would “restrain or abridge the liberty of speech or of the press.”

Ross used his official, verified Twitter account that is widely understood to belong to a member of the Wisconsin Ethics Commission and which he has long used in his official capacity (mostly to tweet hateful things at Republicans he doesn’t like).  Given his position—a seat on the board that is ironically tasked with determining ethical behavior in politics and campaigns—an advertiser such as UW Health may surmise that it is doing something unethical by advertising on what Ross calls “white nationalist/terrorist insurrection radio.”

This characterization is legally problematic for Ross for another reason: It is highly defamatory.  Both Vicki McKenna and I, as well as the stations on which we broadcast, are considered public figures in the eyes of the law.  This would mean that for a defamation claim against Ross and the Wisconsin Ethics Commission and State of Wisconsin that he represents, it would need to be proven that Ross acted with “actual malice.”  This occurs through a demonstration that Ross wrote what he wrote knowing full well that it was false or wrote with a “reckless disregard for the truth.”

Given that broadcasts on the public airwaves are heavily regulated by the Federal Communications Commission and a pair of white nationalists and domestic terrorists doing talk shows in the two biggest cities in Wisconsin probably wouldn’t get past federal regulators, Ross clearly knows that neither of us is a white nationalist or domestic terrorist.  Since he does know this but tweeted his falsehoods anyway, he is liable for defamation.

Far more troublingly, though, is his unconstitutional attempt to use his position to silence opinion journalists with whom he disagrees politically.  By characterizing us as “white nationalists” and “terrorists” and using his official, verified Twitter account to do so, he is giving advertisers the mistaken opinion that running commercials on our stations would be somehow unethical.

In reality, what Ross is doing is the height of unethical, unconstitutional, and unhinged behavior.  Moreover, it potentially rises to the level of misconduct in public office.  Wisconsin Statute 946.12(3) holds that a public official commits misconduct when he “exercises a discretionary power in a manner inconsistent with the duties of the officer’s or employee’s office or employment or the rights of others and with intent to obtain a dishonest advantage for the officer or employee or another.”

Using his position to infringe on the free speech and press rights of both Vicki McKenna and me in an attempt to “bankrupt” our employer through his boycott campaign is rather obviously designed to obtain a dishonest advantage for Democrats across the state who are often criticized on our shows.  Eliminating Vicki and I would give those Democrats nearly universally laudatory coverage from lapdog print and television journalists.

Ross’ conduct is potentially unlawful, likely defamatory, and certainly unconstitutional.  It is also highly revealing.  He might be the first totalitarian-leaning liberal stupid enough to use his government position to violate the First Amendment rights of conservatives, but he is one of millions of dangerous despots-in-waiting who want nothing more than the total silencing of their opposition.

While I personally bristle at making myself the story, I will also never be silenced and never stand for any attempt to silence me, especially from a government whose most sacred duty is upholding my rights as both a journalist and a citizen.

Fortunately, Wisconsin has an Ethics Commission that can process and litigate such egregiously unethical behavior…including by one of its members.  To contact the Wisconsin Ethics Commission, call (608) 266-8123 or email Ethics@wi.gov.  To fill out a formal complaint form, click here.