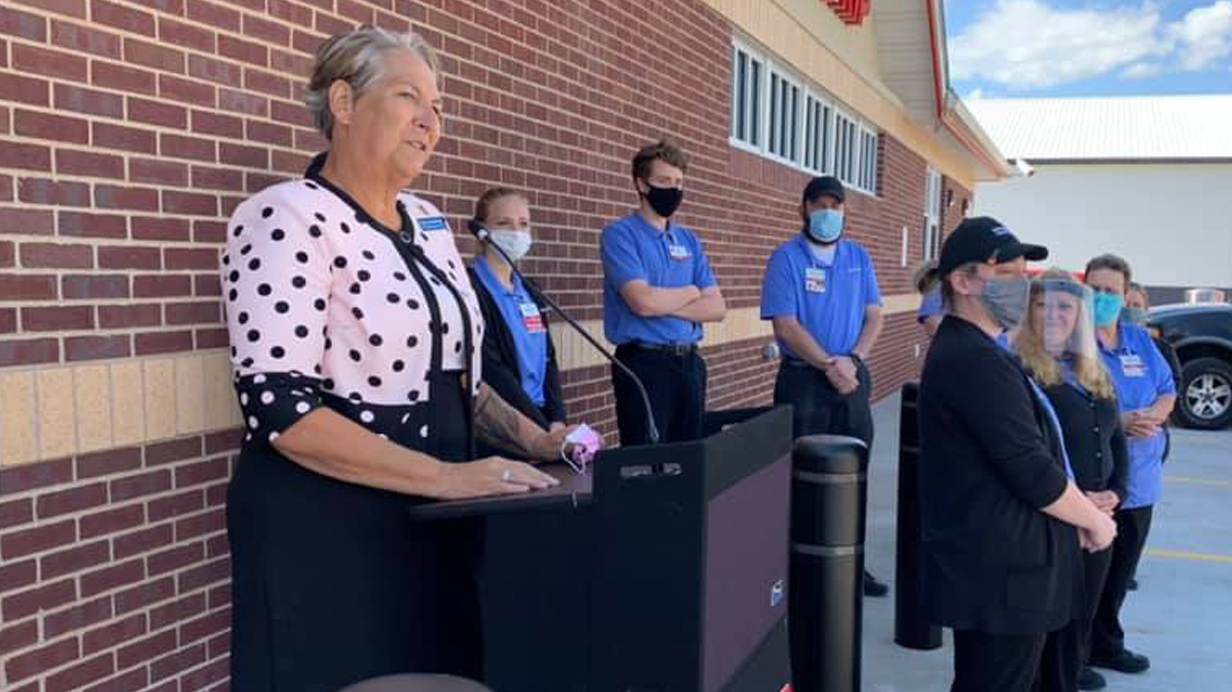 It was a fitting end to Wisconsin’s lawless presidential election: When one of the state’s electors cast her ballot at the State Capitol, she all but confirmed that she herself had committed election fraud.

Wisconsin Statute 6.86(2) allows voters to list themselves as “indefinitely confined because of age, physical illness or infirmity” or if they are “disabled for an indefinite period.”

As she cast her electoral vote for Joe Biden in Madison (roughly 250 miles away from her home in Somerset) on Monday, Schachtner proved that she was in no way confined because of age, physical illness, infirmity, or physical disability.  She managed to get to the Capitol just fine.

Schachtner broke the law, and she proved it when she traveled 250 miles from the home in Somerset where she is most definitely not confined to the Wisconsin Capitol in Madison to serve as one of Biden’s ten electors.

This past June, however, after voting in person in May’s special congressional election, both Schachtner and her husband Joseph decided that they were indefinitely confined to their home and marked this designation on their application for absentee ballots ahead of the August Congressional Primary.

Schachtner appeared on the ballot in that race, and six days beforehand spoke at the grand opening of a Kwik Trip store in New Richmond.  So unconcerned was she about her health that during the middle of the COVID-19 pandemic she didn’t even wear a mask as she spoke.

Shortly after @SenSchachtner spoke at the grand opening of a local Kwik Trip, she declared she was indefinitely confined on her absentee ballot application. @DanODonnellShow points out that’s #electionfraud. https://t.co/mN6z5ZARQh #WIright pic.twitter.com/eKkwXaFH0T

Schachtner’s attendance at this seemingly well-attended event stood in stark contrast to the advice she gave Wisconsinites in March: Stay home to save lives.

“There are plenty of opportunities to do your part, but the most important thing you can do right now is simply maintain your distance from other people as much as you can,” she wrote in an op-ed in the Dunn County News.  “While we can’t stop this virus in its tracks, we can slow it down and we have to.”

As the virus spread and the hospitalization rate and death toll climbed this fall, though, Schachtner ignored her own advice and campaigned across her district.  According to her official Facebook page, she went to Ted’s Pizza Palace in Menominee on September 15th and joined State Treasurer Sarah Godlewski for an event in River Falls on October 8th.

She found time for leisure activities, too.  On September 26th, she posted a picture of herself and her husband “going out and enjoy[ing] all the wonderful natural resources that our state has to offer.”

Suffice it to say that neither Schachtner nor her husband was ever confined to their home for an indefinite period of time and, in fact, never confined to their home at all.  So why did they claim this status?  The same reason that more than a hundred thousand other people did; Democrats in positions of authority told them to in an effort to skirt Wisconsin’s Voter ID Law.

When Governor Evers failed to sneak a temporary suspension of the state’s photo identification requirement into a COVID-19 relief bill, Democratic Dane County Clerk Scott McDonnell and Democratic Milwaukee County Clerk George Christianson both issued patently absurd and unlawful guidance that because of the COVID-19 outbreak and subsequent “Safer at Home” lockdown, every single voter in the state was indefinitely confined and should mark themselves as such.

This advice was so wrong and so ridiculous that the Wisconsin Supreme Court intervened, ruling that their “advice was legally incorrect” and possibly dangerous because “voters may be misled to exercise their right to vote in ways that are inconsistent with” state law.

Schachtner and roughly 178,000 other Wisconsinites did.  The MacIver Institute found that the number of indefinitely confined voters rose by a staggering 238 percent this year, and many of them were not actually ever confined to their homes.

Each one of them—Schachtner included—likely committed election fraud, which under Wisconsin Statute 12.13 can involve making “false statements to the municipal clerk, board of election commissioners, or any other election official whether or not under oath.”

Schachtner was not and is not indefinitely confined, but she claimed she was to election officials when she applied for an absentee ballot.  That is the statutory definition of election fraud.  Moreover, on that ballot application is a reminder to voters that making “false statements in order to obtain an absentee ballot” is a misdemeanor punishable by a fine “of not more than $1,000, not more than six-months imprisonment or both.”

Schachtner broke the law, and she proved it when she traveled 250 miles from the home in Somerset where she is most definitely not confined to the Wisconsin Capitol in Madison to serve as one of Biden’s ten electors.

This trip—ultimately proving that even the most well-connected, well-respected of Democrats were not above breaking election law this year—is the most fitting and revealing possible conclusion to one of the most shameful chapters in Wisconsin electoral history.