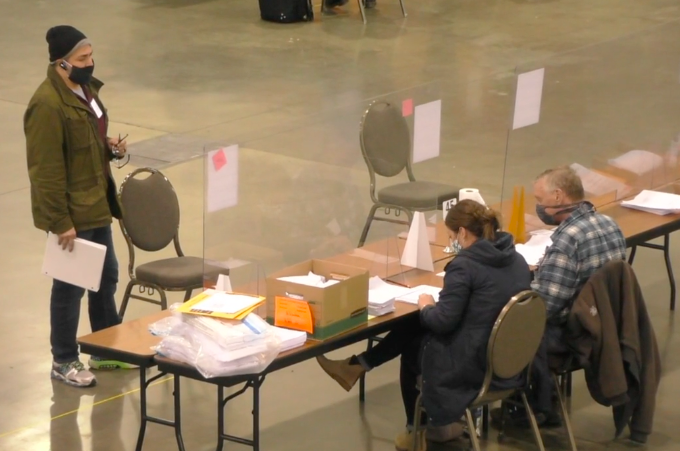 As Dan O’Donnell reports, the City of Milwaukee appears to be running its recount about as openly and honestly as it ran the election.

Believe it or not, the discovery of 386 votes that were never counted might have only been the third or fourth most suspicious thing to happen during the City of Milwaukee’s presidential election recount.  So questionable has city, county, and state officials’ behavior been that the uncounted votes barely elicited more than a shrug and a “Yeah, that’s about what I expected.”

Almost immediately after President Trump’s campaign wired the Wisconsin Elections Commission $3 million for a partial recount (a full recount would have been more than four times the $2 million the WEC charged Green Party candidate Jill Stein for her recount just four years ago), WEC staff called an emergency meeting to change rules for conducting recounts in Wisconsin.

Specifically, staffers wanted to make it far more difficult for representatives of a candidate to issue challenges to ballots.  Naturally, the only reason for this abrupt change the second that President Trump paid for a recount would be to make President Trump’s recount all but meaningless.

The three Republicans held together and rejected these changes after a marathon late night meeting, but the writing on the wall was clear: The people who control Wisconsin’s elections were going to be about as honest in administering the recount as they have been in administering elections.

Milwaukee County Clerk George Christenson, who in March issued unlawful advice to voters to commit election fraud by listing themselves as indefinitely confined even if they weren’t, almost immediately destroyed his ability to preside over the county’s recount fairly.

“This is just another form of voter suppression trying to attack our minority neighborhoods; that’s the reason, there is no other reason,” he told Urban Milwaukee.  “Essentially the plan by the Trump campaign is to throw as much paint on the wall and see what sticks.  [The recount] will show that everything was done by the book.”

This cocky pronouncement, of course, was made before it was learned that Christenson’s poll workers somehow managed to not count 386 votes in the one area of the City of Milwaukee that has a fair amount of Republican voters.

Amazingly, though, the Milwaukee Elections Commission has behaved even more egregiously than Christenson.  At the outset of the recount, they forbade the Trump campaign’s observers from talking to the vote counters, which of course made challenging ballots that they were counting next to impossible.

“An election official told me that we cannot interact with the observers because that would be election interference,” said one observer.

How exactly is an observer supposed to alert a counter to a ballot challenge if they’re not allowed to speak to them?  And how exactly could one engage in “election interference” three weeks after the election?

For the entire first day of the recount, observers were able to lodge virtually no complaints since the “no lodging complaints by talking to counters” rule was strictly enforced.  As a result, observers said, thousands of questionable ballots were simply mixed in with good ones so that they could not possibly be recovered and challenged later on.

Once observers were finally allowed to actually talk to counters and challenge ballots, the counters simply concealed the ballots from them as they worked.

“The city workers paged through the ballot envelopes in a secretive way, often just taking the stack and keeping the stack in place in front of them while peeking at the bottom section with the name and address so only they could see it,” said one observer.  “I observed them doing this with all 1,855 ballot envelopes, of which I was told 13 were from [people who marked themselves as] indefinitely confined.  I just have to take their word for that—as with everything else—because they wouldn’t let me see anything.

Because of COVID-19, the Milwaukee Election Commission said, observers would have to sit six to eight feet behind each table full of counters…with a plexiglass screen in between them.

“It was pretty much a joke,” an observer reported.  “You are 6 feet away from the counters who are behind plexiglass that is scratched and foggy. You literally need binoculars to observe and see anything.”

Making matters worse, the Trump Campaign was in some instances limited to one observer watching three or four counters reviewing and sorting three, four, or even five stacks of ballots.  With each of these counters being as secretive as possible and doing his or her best to keep the ballots out of the observers’ sight, the Trump Campaign might as well not have had any observers at all.

At one point, they literally didn’t.  Early in the recount, the Milwaukee Election Commission ordered counters at four different tables to stop.  The Commission then adjourned without verifying that the counters ever stopped.  They didn’t.

At the end of the day, after the Commission adjourned and Trump Campaign observers had gone home, workers continued to count for more than an hour.  The next morning, the Commission ordered those counts to be redone. Unsurprisingly, President Trump lost multiple votes during this new count and no explanation was ever given as to why.

Republican Wisconsin Elections Commission member Bob Spindell was in attendance during the first few days of Milwaukee’s recount and personally witnessed this sort of unlawful behavior that blatantly violated the WEC’s guidance for conducting the recount.  He was prepared to testify to the Milwaukee Election Commission that multiple rules were being broken and that the entire recount was being conducted in an impermissible manner, but the Milwaukee Election Commission wouldn’t let him testify.

Why would it?  It is running the exact sort of recount that it wants to: Secretive, dishonest, and ultimately designed to benefit only one candidate.  In other words, it’s running the recount exactly like it ran the election.