In a rebuke of Palm and DHS, another provision would move responsibility for COVID-19 diagnosis, testing, overflow facilities and health care staff surge to the Department of Administration

Governor Evers published a new proposed COVID-19 relief package on Tuesday that contains over a dozen different proposals and would spend an additional $541 million in response to the pandemic.  Shortly after Gov. Evers made his bill draft public, Assembly Republicans, led by Speaker Robin Vos (R-Rochester), held a press conference to share with their ideas to combat COVID-19.

The Governor would spend $403 million to fund statewide testing and surge capacity, $63 million to fund “community testing, contact tracing, vaccinations, and public awareness” campaigns, and $75 million in small business grants given out by the Department of Revenue.

The Governor did not adequately address why he decided not to spend any of the $75 million in state tax dollars the Legislature authorized for him to use to combat COVID-19 back in April.

Governor Evers has also never directly answered why he decided to build only one overflow facility at State Fair Park with the federal CARES Act money instead of numerous facilities all across the state. The 754 bed facility at State Fair Park was built for $15 million and was paid for out of the $2.3 billion federal CARES Act funding pot. The facility has gone largely unused despite Governor Evers warning us for weeks that our hospitals all across the state were at capacity and the entire health care system was buckling because of new COVID cases. As of yesterday, there were 23 patients total at the State Fair Park facility. Some COVID patients have been reluctant to transfer down to the State Fair Park facility because of the distance from their homes.

In his latest proposal, Governor Evers is asking for $403 million in state tax dollars for more testing and surge capacity. Will Governor Evers finally build additional overflow facilities in other parts of the state that might actually be utilized? 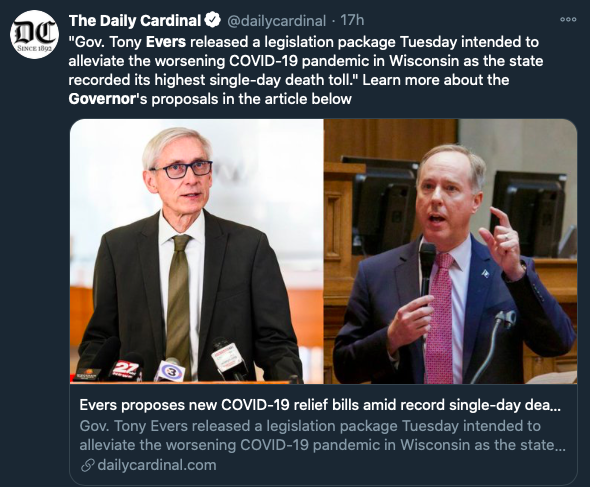 In seeming criticism of Secretary-Designee Andrea Palm and the Department of Health Services, another provision in Evers’ bill would shift responsibility for COVID-19 testing, diagnosis, surge staffing, and surge facilities from DHS to the Department of Administration. This dramatic shift away from DHS of critically important COVID responsibilities, which was curiously excluded from the Evers’ summary document, is being interpreted by some as a loss in confidence by Evers in Palm’s leadership and ability. The public health experts at DHS cannot be happy that DOA would be put in charge of critical duties in their area of expertise.

Other provisions would waive the one-week waiting period for unemployment benefits, waive school requirements to administer any standardized tests or school accountability reports for the 2020-21 school year, and would allow the Department of Health Services (DHS) to issue an order that prohibits any evictions or foreclosures.

At least 13 provisions in Evers’ new legislative package are simply extensions of the original COVID-19 package that the Legislature passed back in April.

Assembly Republicans held a separate press conference on Tuesday afternoon to talk about their own ideas. Speaker Robin Vos (R-Rochester) said the Governor’s ideas are just more of the same and that Assembly Republicans wanted to propose ideas that had not yet been discussed.

According to the Speaker, the Assembly wants to double contact tracers, add more National Guard COVID-19 testing locations, and begin an at-home testing pilot program. Speaker Vos told the press that the Assembly did not have any bill drafts or cost estimates to share at this time. The Speaker said that he would prefer to “use state dollars last, not first,” and use up Wisconsin’s remaining federal CARES Act aid before committing additional state tax dollars.

Yesterday, MacIver reported that $1.1 billion of the total $2.3 billion federal CARES Act funding has yet to be spent by the Evers Administration.

The Speaker said the goal was to meet with the Governor sometime this week, have a bill negotiated by Thanksgiving, and pass the bill in December. It is unclear, now, if this will be the case.

Below is a summary of the provisions listed in Gov. Evers’ proposed package: