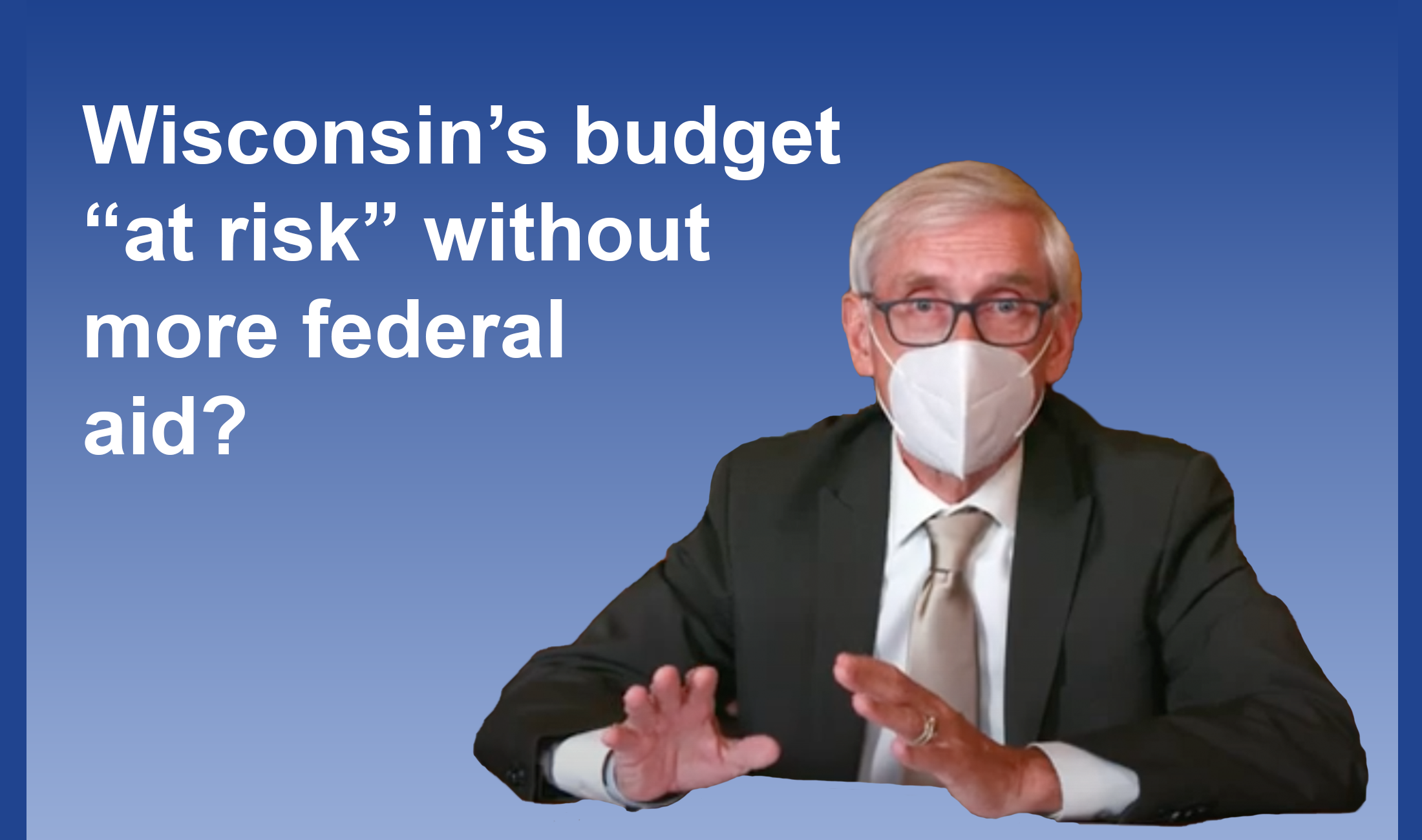 Is Wisconsin In As Tough Of Fiscal Shape As Governor Evers Warns?

With $10 billion from the Paycheck Protection Program, $2 billion in general federal COVID-19 aid, a $1.2 billion General Fund balance, $762 million in the Rainy Day Fund and $300 million in reduced state spending, is Wisconsin in crisis?

Governor Tony Evers believes the fiscal outlook for Wisconsin is grim for 2021 without more congressional intervention. If Wisconsin doesn’t receive additional federal dollars to help us pay for our COVID-19 response, Evers believes the economy will tank and the state budget will take a hit.

“We’d have to make some very, very, very difficult decisions in our next budget and in the next biennium” without those federal dollars, Evers told the press on October 20.

So, is Wisconsin on the verge of a fiscal crisis, and is the state truly primed to take a terrible hit without more federal aid?

In March of this year, President Donald Trump and the federal government passed the Coronavirus Aid, Relief, and Economic Stability (CARES) Act, a stimulus bill that distributed money to every state in the Union for statewide COVID-19 responses.

Wisconsin was earmarked for $2.3 billion in aid. Municipalities with populations at or over 150,000 were given a direct share of the aid, so Milwaukee, Milwaukee County, and Dane County collectively received $360.6 million of Wisconsin’s $2.3 billion. The remaining $1.9 billion was given to the Governor to spend how he sees fit with little or no oversight from the Legislature.

This aid came in addition to the over $9.9 billion in Paycheck Protection Program (PPP) forgivable loans that were received by over 89,000 Wisconsin businesses. If a business uses the majority of the PPP loans to cover specified costs, like payroll, then the business can apply for the loan to be forgiven entirely by the federal government.

Even though the Federal CARES Act was passed back in March and the Governor earmarked most of that $1.9 billion, much of the federal aid sat in the state’s coffers for a long time. Congressman Bryan Steil (R-Janesville) asked Gov. Evers for more information back in July when a U.S. Department of Treasury report discovered that Gov. Evers had obligated $1.72 billion of the federal funds but only $75 million had actually been disbursed.

“It is important we have clear, up-to-date information on where CARES Act dollars have been spent and how the state intends to spend remaining funds,” Steil said in a statement.

Evers replied to the Congressman, saying that “The Department of Administration (DOA) is in the process of reviewing expenses to ensure compliance with federal law and Treasury guidance, and I would be happy to provide an update after DOA completes their review.”

Evers has yet to release an explanation that details how much money has actually been spent and how much money has been earmarked, but still sits in state coffers. Recently, Gov. Evers has said publicly that all of the $1.9 billion in federal CARES Act funding has been earmarked except for $120 million that he has set aside “to respond to emerging needs.” A webpage by the DOA shows vague descriptions of where the money has been obligated to, but does not clarify what has been disbursed.

What the Governor provided still doesn’t explain how much of the $1.9 billion has been actually distributed to pay for immediate COVID-19 needs and why so much of the federal aid has sat in the state government account for so long. The Pandemic Response Accountability Committee (PRAC) has an answer to the first question.

PRAC was established by the CARES Act to provide transparent reporting on federal coronavirus spending by states and municipalities in order to detect waste and fraud. According to PRAC’s data on Wisconsin, as of November 17, $1.2 billion out of our state’s $2.3 billion share of the CARES Act aid has been spent. This means 48.1%, or $1.1 billion has not.

Even though nearly half of Wisconsin’s CARES Act aid has not been spent, Governor Evers has stressed that the $2.3 billion just isn’t going to cut it. On October 20, Evers said to the press that “one package passed months ago is just not enough” to support Wisconsinites through the rest of the pandemic response.

The Governor has made a recent continuous push for additional federal aid, saying that the state will have no choice but to cut funding to regular government programs in order to pay for our own COVID response after the CARES Act funds expire on December 31.

Gov. Evers has not specified an exact number on how much more federal funding in total Wisconsin needs or given a detailed accounting of what programs would be funded by more federal aid.

“Essentially, any money for schools is at risk, funding for our healthcare outside of COVID-19 is at risk, there’s a lot of things at risk as part of our state’s budgets and our state’s efforts. COVID-19, we will have to pay for it, but it will be a significant, significant issue for our budget,” Evers said to the press on October 20.

Additional federal coronavirus aid is currently up in the air. Congress and President Trump have been in a stalemate about a new COVID-19 package for several months. Negotiations on a new round of stimulus aid and monies for the paycheck protection program stalled in October, but talks appear to be picking up momentum again around the proposed $2.2 trillion HEROES Act stimulus package.

While we don’t know if any new aid will come before December 31, we do know that despite the Governor’s dire prediction, Wisconsin’s fiscal situation is in pretty good shape right now.

According to an annual fiscal report by the Department of Administration (DOA), Wisconsin’s General Fund ended with a $1.2 billion positive balance on June 30. That’s the largest General Fund balance in two decades, and is $400 million higher than anticipated.

At the end of the fiscal year, revenues were so high that Wisconsin was able to make a $105.8 million deposit to the state’s Rainy Day Fund. That brings the fund’s balance to $761.8 million, the “largest balance in state history,” according to the DOA.

Finally, the Governor announced this year $301 million in state agency budget savings in response to the pandemic. This is great news for fiscal prudence in Wisconsin, especially in cash-strapped COVID times. Even though state government has not laid off or furloughed any of their 29,000 employees, the administration saved taxpayers hundreds of millions of dollars through efficiencies and less spending. The UW-System, which employs another 39,000 people with taxpayer dollars, is also set to save a combined $30 million through furloughs and pay cuts between UW-Madison and the rest of the system.

While the Governor repeats his dire warning that Wisconsin will be in trouble after December 31, the fact is that Wisconsin is currently in a positive place financially. Wisconsin taxpayers, who are federal taxpayers by the way, deserve more information from the Governor and a complete accounting of how every single dollar of COVID aid has been spent before he demands more of taxpayers’ money from the federal government.

The MacIver Institute will continue to update taxpayers on Wisconsin’s COVID-19 spending and fiscal status as we learn more.