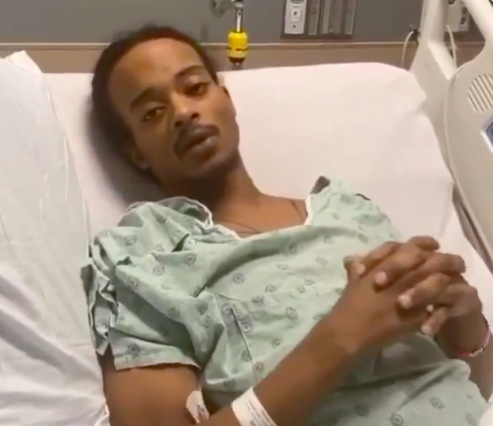 He’s met with Joe Biden and Kamala Harris and is being treated like a heroic martyr in the press, but as Dan O’Donnell reports, this rush to lionize Jacob Blake is dangerously misguided.

Jacob Blake’s first public statement since being shot by a Kenosha Police officer was treated with all of the solemnity and reverence of a papal address.

“Jacob Blake, Rare Survivor at Center of Police Protests, Starts Telling His Own Story,” read the banner headline in The New York Times.  Not to be outdone, ELLE Magazine’s headline read “‘Stick Together’: Jacob Blake Makes His First Public Statement since Kenosha Police Shot Him.”

“I just want to say, man, to all the young cats out there and even the older ones, older than me, there’s a lot more life to live out here, man,” Blake said in a recorded message to his supporters, many of whom are apparently in the media.  “Your life — and not only just your life — your legs, something that you need to move around and move forward in life, could be taken from you like this, man.”

Blake, who says he was paralyzed from the waist down in the August shooting, recorded that message on the same day Democratic Vice Presidential candidate Kamala Harris traveled to Wisconsin to meet with him.  According to Blake’s attorney, Harris “told Jacob that she was…proud of him and how he is working through his pain.”

Proud of him for what, exactly?  Blake is a sexual assault suspect and alleged domestic abuser who is accused of committing a heinous crime against his ex-girlfriend in front of their young son.  When he was shot, he had violated a restraining order and threatened the same woman while armed with a knife and then fought with officers before trying to steal his ex’s SUV with three of their children inside.

He deserves none of the bizarre veneration he has received.

In 2015, he was charged with a felony and several misdemeanors for allegedly pointing a gun at two people in an argument at a bar and then injured a police officer while resisting arrest.  He avoided conviction only because of a prosecutor’s motion for dismissal “due to witness issues and age of the case.”  In other words, the District Attorney’s Office couldn’t get any of the witnesses against Blake to cooperate, so it had no choice but to drop the case.

Four months ago, he allegedly committed an even more unspeakable violent crime.  According to a criminal complaint, Blake broke into his ex-girlfriend’s home while she slept, woke her up when he told her “I want my s***,” then “suddenly and without warning, reached his hand between her legs, penetrated her vaginally with a finger, pulled it out and sniffed it, and said, ‘Smells like you’ve been with other men.’”

The couple’s young son lay right next to his mother at the time.

Blake then allegedly stole the woman’s SUV and ATM card and used the card to make two fraudulent $500 withdrawals.

On the evening Blake was shot, his ex-girlfriend called 911 when Blake showed up to her home and began harassing her, even stealing her car keys and attempting to again steal her SUV while armed with a curved-blade knife.

When officers arrived on the scene to protect the woman and arrest Blake on the sexual assault charges against him, Blake allegedly instantly became combative.  The Kenosha Professional Police Association reports that “Blake forcefully fought with the officers, including putting one of the officers in a headlock.”  Two officers used their tasers, but Blake kept fighting with them.

Blake then pulled out his knife and stormed around his ex-girlfriend’s SUV, in which sat three of their children.  Widely circulated video shows Blake then lunging into the front seat, giving the officer who pursued him ample reason to believe he was either reaching for another weapon or attempting to kidnap his children and/or use the SUV as a weapon and run over the officers or anyone else on the scene as he made his escape.

Is that what Kamala Harris is so proud of?  Is that why the Milwaukee Bucks and Brewers boycotted their games?  A society may have a reasoned debate over the legality and propriety of the Blake shooting, but elevating him to a sort of woke sainthood speaks volumes about how misplaced that society’s priorities are.

“What I came away with was the overwhelming sense of resilience and optimism that they have about the kind of response they’re getting,” Biden said.

Naturally, that response never seems to include the years of vicious racism and antisemitism spewed by Blake’s father, Jacob Blake, Sr.

In a three month stretch of 2017 alone, the elder Blake posted such filth as “A jew can’t tell me s*** period,” “The Jewish media picks and chooses who is a terrorists [sic]  and is not,” “A cracker jew can do whatever to a white woman for years but let a j** try it,” and “The same pink toe Jewish people that control the interest rate control the media the control Minds and money.”

He, too, is being undeservedly lionized by a press corps desperate to give moral authority to anyone but the police.  Anyone, it seems, who can be portrayed as a victim of the police is held up as a cultural icon in a culture apparently unconcerned with how vile and violent its icons may be.

So long as they can be used to make a political point, they will meet with leaders, get glowing press coverage, and enjoy all of the perks of unearned celebrity.

Jacob Blake, Sr. isn’t a role model, he is an obvious bigot.  Jacob Blake, Jr. isn’t a martyr; he is a violent criminal who has allegedly spent the past four months terrorizing the mother of his children.

In liberal society’s mad rush to demonize the police, it has sainted the worst sort of sinners, and that says less about them than it does about liberal society itself.