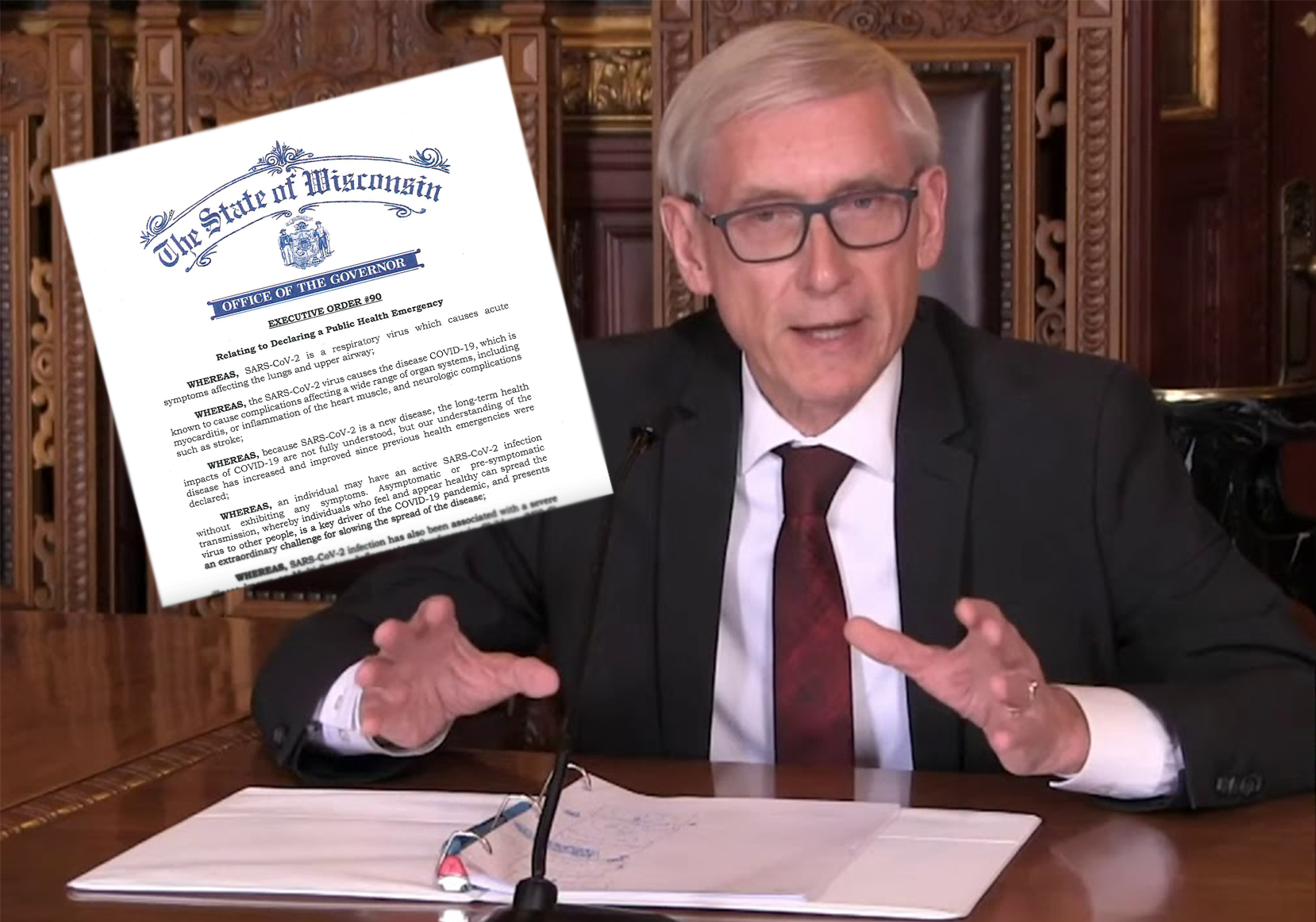 Dan O’Donnell breaks down how Governor Evers is willfully violating the Constitution and the law by declaring emergency after emergency in an apparent attempt to give himself emergency powers forever.

Stop me if you’ve heard this one before: Governor Evers has declared a public health emergency over Wisconsin’s COVID-19 outbreak.  For the second time in three months, Evers is willfully trying to circumvent state law and unconstitutionally seize for himself emergency powers that neither Wisconsin’s Constitution nor its statutes ever intended to grant him.

Wisconsin Statute 323.02(16) requires that “the occurrence or imminent threat of an illness or health condition…poses a high probability of…a large number of deaths or long-term disabilities among humans” and that “creates a significant risk of substantial future harm to a large number of people.”

Under this definition, it is not even clear that the current spike in COVID-19 cases that prompted Governor Evers’ order fits this definition.  While total numbers of positive tests and positive test rates have indeed spiked since college students returned to campus this month, there has been nowhere near the “large number of deaths or long-term disabilities” to qualify as a true public health emergency.

Clearly, the requirement of a “large number of deaths” has not been met relative to the severity of the same outbreak at different points of the same pandemic.  It is also an open question as to whether the 1,251 total deaths for which COVID-19 is at least partially responsible meets the true threshold for a public health emergency.  Obviously, each of those deaths is tragic and the intent here is not to minimize any of them, but for some perspective, seasonal influenza and pneumonia killed 1,075 Wisconsinites in 2018 (the most recent year for which CDC data is available).  Did anyone then ever even think that the flu was a public health emergency?  Of course not.

Just as the current spike in positive COVID-19 tests has not resulted in a concurrent spike in deaths, it has not led to a dramatic rise in hospitalizations, indicating that the statutory requirement of a “large number of…long-term disabilities” has not been met and thus a new public health emergency cannot be lawfully declared.

When Evers declared his public health emergency on September 22, a total of 433 people with positive COVID-19 tests were being treated in Wisconsin hospitals.  On May 28th, that number was 413.  Governor Evers didn’t declare a second public health emergency until two months later, when the number of hospitalizations had dropped all the way to 246.

There has not been a spike in patients who have required intensive care, either.  On September 22nd, there were 131 ICU patients.  On May 28th, there were 138.  Two months later, when Evers finally declared a second public health emergency, there were just 86.

Since these patients would be far more likely to suffer “long-term disabilities” as a result of their infection, it is nonsensical to claim that there is a substantially higher likelihood for either deaths or long-term disabilities from COVID-19 than there was during any point between May 10th and July 28th when Evers saw no need to declare a public health emergency.

COVID-19 clearly met the statutory criteria for such a declaration back in March and early April, when the virus was truly novel and public health professionals did not know how severe it was likely to become.  Faced with such an uncertain threat, Evers was of course perfectly justified in issuing his first executive order declaring COVID-19 a public health emergency on March 12.

In July, he was not.  In September, he is not.  Nothing about the severity of the virus or the ability of Wisconsin’s medical system to handle it has materially changed since the first public health emergency expired on May 10th.  If anything, the virus has proven to be far less deadly and Wisconsin has grown far better equipped to battle it.

The facts don’t support Evers’ new declaration, and neither does the law.  The statute under which he derives his authority, Wis. Stat. 323.10, explicitly holds that a public health emergency “shall not exceed 60 days, unless the state of emergency is extended by joint resolution of the legislature.”

The reason for this is obvious: When a state of emergency exists, the Governor assumes powers that he would not ordinarily be able to assume.  For instance, during Evers’ first emergency declaration, he issued a statewide lockdown that amounted to the single greatest exercise of executive authority in state history.  Never before had a Governor ordered schools closed, businesses shuttered, people homebound, and entire lives essentially put on hold.  He was only able to do so because a public health emergency existed.

Because this power is so great, it is temporary and expires after 60 days unless the Legislature extends it.  Since the Legislature sued Evers over his unlawful effort to extend the lockdown this spring, it was clear that it would never issue a joint resolution extending a state of emergency that would give Evers even more emergency powers.  Evers knew this, so he simply declared a new public health emergency in late July even there was no valid criteria for doing so.

Tellingly, he did not try to extend that state of emergency since it would have required a joint resolution of the Legislature.  He simply issued a new executive order declaring a new state of emergency.  This indicates his intent to unconstitutionally and unlawfully violate both the letter and spirit of Wis. State. 323.10 in order to usurp authority from the Legislature extend his emergency powers as long as he possibly can.

This is about as underhanded and tyrannical as a Wisconsin Governor has ever behaved, and in order to stop this imperial Executive Branch, the Legislature must act immediately through either an immediate joint resolution to end this public health emergency, a lawsuit to prevent similarly devious end-arounds in the future, or both.

The Governor’s power is not and cannot be unchecked, even when he pretends there is a new public health emergency to deal with.  Now is the time for the Legislature and, if need be, the Judiciary to provide the necessary check to bring Wisconsin’s branches of government back into alignment.