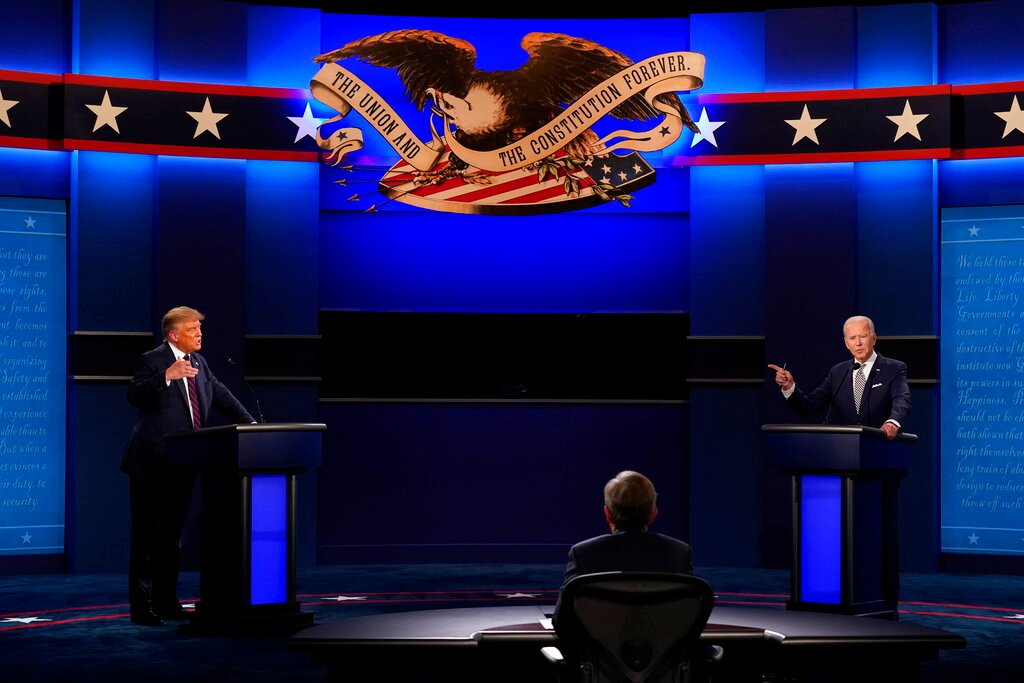 Dan O’Donnell breaks down the debate and finds the presidential race largely unchanged by it.

@DanODonnellShow - Pres Trump was successful in defending his record in a way that Obama & Bush were not. He avoided the dramatic first-debate loss as the incumbent & a dramatic realignment of the fundamentals of this race. Click To Tweet @DanODonnellShow - Pres Trump’s most memorable moment was his retort to Biden’s claim that he is the worst president ever. 'In 47 months, I’ve done more than you’ve done in 47 years.' Quick, concise, accurate & devastating. Click To Tweet

Just how well did Tuesday night’s presidential debate go for Democratic nominee Joe Biden?  So well that members of his party and their allies in the media alike are urging him to skip the next two.

“I don’t think the country will be yearning for another one of these,” former Obama-Biden campaign strategist David Axelrod said during CNN’s post-debate coverage.  “I think Joe Biden has a decision to make.  You know what will happen if Biden says ‘I doesn’t want to dignify this with another debate,’ that the president will attack him for running away from debates but I think the country will feel that way after watching this spectacle.”

Why not, exactly?  If it was such a disaster for President Trump—and Axelrod himself said it “may have ended his presidency”—then why wouldn’t Biden be counting down the days until he gets to embarrass Trump again?

And, more importantly, why wouldn’t Democratic strategists like Axelrod as well as Biden’s media cheerleaders (whose nightly programming consists of the exact same shouting matches they are suddenly condemning) be eager to air another 90 minutes of Trump proving himself to be a boorish, buffoonish bully?

What America saw Tuesday night certainly wasn’t the high-minded discussion of substantive issues that it perpetually pretends presidential debates to be; it was the insult- and interruption-laden cage match that the public and the press alike inevitably expects (and perhaps secretly wants) them to be.

To paraphrase Shakespeare, debates almost always strut and fret their hour upon the stage and are then heard no more.  They are, ultimately, “full of sound and fury, signifying nothing.”  That is not to say that debates are not important, but they are generally unmemorable save for a few moments that are heard through the cacophony and actually internalized.

President Trump’s most memorable moment was his instant retort to Biden’s claim that he is “the worst president America has ever had.”

“In 47 months, I’ve done more than you’ve done in 47 years, Joe,” Trump answered.  It was quick, concise, accurate, and devastating.  It was also buried under a rather thick layer of hectoring disruptions that the President clearly believed could frustrate Biden and knock him off his game.

“Will you shut up, man?” a visibly frustrated Biden asked Trump as the President badgered him about his refusal to say whether he supported Democrats’ plans to pack the Supreme Court with liberal justices should they win back the presidency and the Senate next month.

Biden did himself no favors with his pathetically weak answer that “whatever position I take on that, that’ll become the issue.”  The purpose of a debate, of course, is for candidates to take positions on issues and communicate them to the public.  Yet Trump, as he would do time and again throughout the debate, refused to simply let Biden beat himself.

Trump’s team was rather obviously nervous about a repeat of the infamous first Obama-Romney debate in 2012, in which Republican challenger Mitt Romney took shot after shot after a clearly unprepared President Barack Obama and won the debate easily.  Allowing Biden to similarly attack his presidency—especially tumultuous past nine months—would have been disastrous.

Instead, the President went on offense from the moment the debate started; reaffirming his right to nominate and to expect the Republican Senate to confirm Supreme Court nominee Amy Coney Barrett before or even after the election.

When Biden overestimated the number of people with pre-existing conditions by roughly 50 million or so, Trump pounced and accused Biden of wanting to implement “socialist medicine.”  That moment, exactly eight minutes and twenty five seconds into the debate, was when the structure of it crumbled and the two men began hammering away at each other.

It was also the moment when the supposedly undecided voters who will supposedly decide this election began to tune out because to them, such yammering represents everything they profess to hate about politics: the insults, the pettiness, the sheer nastiness of it all.

President Trump’s near-constant interruptions may well have frustrated a number of the suburban moms in the Midwest whom political pundits believe are the key to his re-election, but Biden’s insult and eyerolls were every bit as off-putting.  Biden combined them with vague platitudes and mealy-mouthed attempts at centrism and failed in his one primary objective: to blast President Trump for his failures in the same way Romney blasted Obama for his eight years ago.

In that sense, President Trump was in his own unique (if overbearing) way successful in defending his record in a way that Obama was not.  He avoided the dramatic first-debate loss that both Obama and President George W. Bush suffered as incumbents and in so doing avoided a dramatic realignment of the fundamentals of this race.

It will still be decided on whether voters believe President Trump’s handling of the economy and the Coronavirus outbreak renders him deserving of a second term and, if he’s not, whether Joe Biden and an increasingly radical Democratic Party can be trusted with the levers of power while their supporters burn down entire city blocks every time they’re upset about something.

The debate changed nothing.  President Trump’s supporters claim he won, while Biden’s supporters claim he did.  The independents that both supposedly needed to convince had changed the channel 15 minutes in.  It was nothing more than 90 minutes of trash TV—initially compelling drama but ultimately tiresome, predictable, and quickly forgotten.