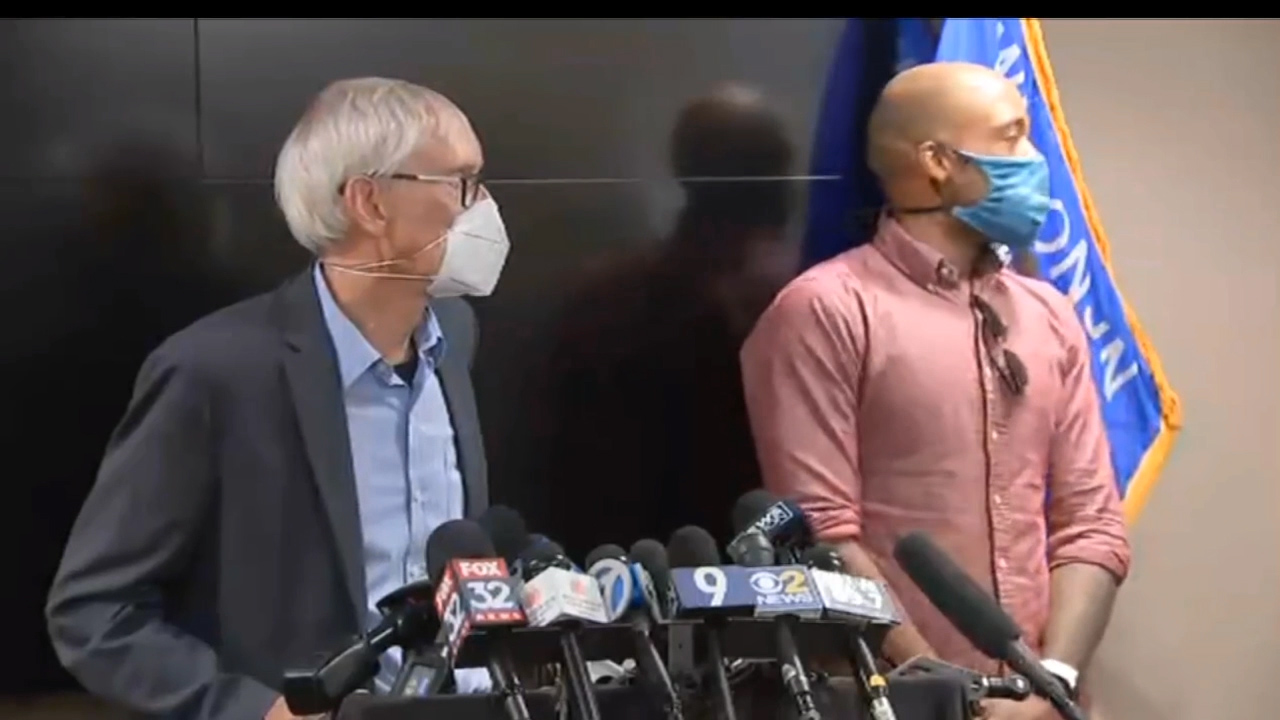 Dan O’Donnell didn’t think Governor Evers and Lieutenant Governor Barnes could embarrass themselves or our state any more than they did during the Kenosha riots last week. Then they started talking about President Trump’s visit.

At first the response to rioting in Kenosha from Wisconsin’s leaders was shameful, but now it is just shameless.  After spending nearly a week inciting rioters while allowing them to burn the city to the ground, Wisconsin Governor Tony Evers and Lieutenant Governor Mandela Barnes are now attempting to shift the blame from their abject failure to President Trump.

In his transparently virtue-signaling letter to the President urging him not to visit Kenosha (which Trump naturally ignored), Evers told Trump that his “presence will only hinder our healing” and “delay our work to overcome division and move forward together.”

This, without a hint of irony, from a Governor who called the shooting of Jacob Blake “merciless” just five minutes after a social media post urged rioters to converge on Kenosha to “f*** s*** up.”

While admitting that he did “not have all of the details yet,” Evers at 10:35 last Sunday night (just five hours after Blake was shot) tweeted that Blake “was not the first Black man or person to have been shot or injured or mercilessly killed at the hands of individuals in law enforcement in our state or our country.”

The following day, Lieutenant Governor Barnes similarly admitted that he did not yet know all of the facts of the Blake shooting, but still said in a press conference that it “was not an accident.”

“This wasn’t bad police work,” he continued.  “This felt like some sort of vendetta being taken out on a member of our community. The officer’s deadly actions attempted to take a person’s life in broad daylight.”

“We don’t need an investigation to know that Blake’s shooting falls in a long and painful pattern of violence,” Barnes said.

Had Barnes or Evers bothered to wait for their own Justice Department or the Kenosha Professional Police Association to release any evidence from the shooting, they might have learned that Blake was armed with a knife, was so violent that he had to be tazed twice, and pulled out his knife as he walked toward a car he was attempting to steal (with children in the backseat) and appeared to suddenly lunge for something inside.

Neither Barnes nor Evers could be bothered to let the facts get in the way of their demagoguery, though, and they just pretended that actual evidence was irrelevant.

“We don’t need an investigation to know that Blake’s shooting falls in a long and painful pattern of violence,” Barnes said the day after his own Justice Department demolished his “vendetta” narrative. “This is a pattern of violence that happens against Black lives too often across this country.”

With their precious narrative in tatters and a state increasingly asking why they didn’t do more to stop a riot that they helped incite, Barnes and Evers rather ham-handedly tried to use Trump as a scapegoat.

While @realDonaldTrump met with #Kenosha businesses to offer his sympathy and support, Lt Gov @TheOtherMandela says the destruction will lead to a better community. #WIright #tcot pic.twitter.com/xotRIhmzbx

“Republicans are leaning neck deep into total carnage,” Barnes tweeted without a hint of irony.

As Kenosha burned, he and Evers not only fanned the flames with a slew of incendiary statements, they refused to do what was needed to extinguish the flames.

Local leaders asked for a deployment of 750 National Guard soldiers but Evers only provided 125.  The following night they asked for 1,500 and Evers only sent 250.  All the while, he and Barnes were assuring rioters that their ostensible cause was just because Blake’s shooting was unlawful and the result of “systemic racism” or “injustice” or whatever woke buzzwords happened to pop into their heads.

President Trump, meanwhile, was publicly and privately putting pressure on Evers to use a show of force to quell the violence.  As soon as Evers acquiesced, the rioting stopped.

Now Evers and Barnes can’t bring themselves to admit that Trump was right and they certainly weren’t going to allow him to do what they thought would be a victory lap in Kenosha on Tuesday.  So they projected onto him the very divisiveness that they have been fomenting since literally the moment the riots began.

As the riots raged, Evers and Barnes not only fanned the flames with a slew of incendiary statements, they refused to do what was needed to extinguish the fires consuming Kenosha.

Their reckless agitating helped figuratively light the fires, while Trump’s pressure campaign helped literally put them out.  Evers and Barnes couldn’t let Wisconsin see this dichotomy and come to the obvious conclusion about who has been a better leader as Kenosha burned, so they have resorted to the tried and true lament of the defeated liberal: Yeah, well Trump’s a racist!

Evers’ suggestion that Trump’s mere presence would “hinder our healing” and “delay our work to overcome division” is a sort of siren song to Democrats whom he fears have abandoned him because of his woeful response to the rioting.  It is, in essence, reminding his base that Trump, not him, is the real enemy here.

It’s nothing more than craven politicking, but it is notable because of how desperate it all was.  Trump visited Kenosha, met with law enforcement officers, toured the damage, and not a single bit of work to overcome division was halted.  Not a single ounce of healing was hindered.

If Evers and Barnes are really serious about healing Kenosha and moving forward as a united Wisconsin, they would be wise to stop their blatant race-baiting and despicable smears of the police until they have at least some shred of evidence to support them.