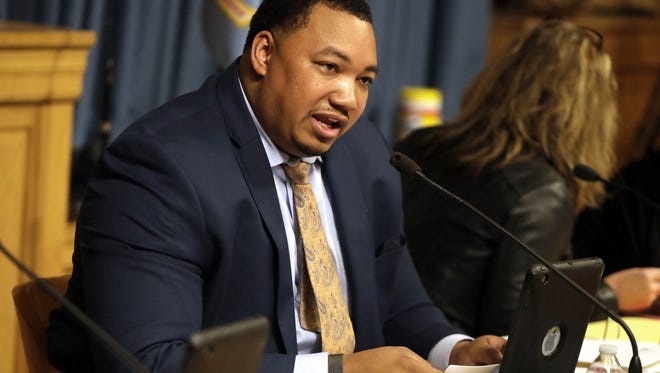 Dan O’Donnell investigates the case of Milwaukee Fire and Police Commission chairman Steven DeVougas and how it pertains to calls for police reform across the country.

How serious are we about reforming policing in this country?  That is, after all, what the past five weeks of protests, demonstrations, riots, and the occasional statue destruction and State Senator beating has been about, isn’t it?

If it is, then we need to get serious about reforming policing, and that starts at the very top.  The Milwaukee Fire and Police Commission (FPC), the civilian agency tasked with overseeing Wisconsin’s largest police department, has become a dysfunctional, apparently corrupt cesspool in dire need of reform.

And that, too, can start at the very top.

FPC Chairman Steven DeVougas has for the past year used his position to bully a police officer into giving favorable treatment to a prominent client accused of sexual assault and attempted to coerce Milwaukee Police Chief Alfonso Morales into firing officers DeVougas wanted fired.

This is public corruption of the highest order and simply cannot be tolerated.

An independent investigation ordered by the FPC determined that DeVougas violated two City of Milwaukee Code of Ethics provisions related to serious conflicts of interest, while multiple sources close to that investigation confirmed to this author that DeVougas attempted to bribe Chief Morales by promising a new four-year term as Milwaukee Police Chief if Morales fired an officer involved in the controversial 2018 arrest of Milwaukee Bucks player Sterling Brown.

Last August, Milwaukee Police received an allegation of sexual assault against Kalan Haywood, Sr., a prominent real estate developer who had just received a controversial $9 million loan from the City of Milwaukee to build a boutique hotel.

When Haywood agreed to an interview with a Milwaukee Police detective, DeVougas accompanied Haywood as his attorney.  In fact, DeVougas spoke with the detective about the case before Haywood ever arrived for the interview.

This presented a rather obvious conflict of interest, since as chairman of the FPC, DeVougas was effectively the boss of the officer interviewing DeVougas’ client.  According to a transcript of their interview, the detective told “DeVougas that he knew DeVougas is with the FPC.  DeVougas reminded [the detective] that he is Chairman.  They agreed the situation was odd or very weird.”

Because of it, the detective “felt that DeVougas was there to protect Haywood from a tough interview.”

Such a serious conflict of interest in attempting to protect a client from a serious criminal investigation would be enough in itself to warrant DeVougas’ dismissal from the Fire and Police Commission, but multiple sources close to the FPC investigation confirm that DeVougas was using his position as Chairman to attempt to bribe Chief Morales by tying his reappointment to specific disciplinary actions against officers that DeVougas wanted to see happen.

In January 2018, several officers were involved in an incident in which the Bucks’ Sterling Brown was tazed and arrested during a heated confrontation outside of a Milwaukee Walgreen’s.  This became a national controversy, and Brown sued the City of Milwaukee for allegedly violating his civil rights.

A month after Brown was tazed, Morales was named to fill out the remaining two years of retired Police Chief Ed Flynn’s term, which was set to expire on January 7, 2020.

By August 2019, when DeVougas accompanied Haywood to his police interview, Morales still had not had a hearing on reappointment to a full four-year term.  This was highly unusual, as Milwaukee Police Chiefs customarily would know much earlier in their final year whether they would be returning for another term.

Morales, though, was left in limbo.

During his interview in the FPC investigation, “Morales stated that his relationship with DeVougas was deteriorating throughout 2019, for reasons that had nothing to do with Haywood’s case.  The men had a running disagreement about whether Morales should fire a certain officer or officers involved” in the Brown situation.  “Morales stated that DeVougas referred to the officers as sacrificial lambs.”

Eventually, “Morales said that DeVougas told him that he could gain reappointment if he fired an Officer [James P.] Collins, who was involved in the Brown incident as well as an incident in which MPD had a car towed without discovering that there was a baby in the back seat of the car.”

Morales, however, refused to fire Collins.

Strangely enough, during a meeting about Morales’ reappointment process in August 2019 (the same month as DeVougas’ interview with a Milwaukee Police detective), Haywood showed up, “apparently at DeVougas’ invitation.  Haywood did most of the talking, although Morales felt that most of what Haywood said was irrelevant.”

Now why would Haywood be invited to a meeting whose express purpose was setting a hearing for Chief Morales’ reappointment?  Could it have been a not-so-subtle reminder to Morales that DeVougas both controlled his future and had a powerful client who could use Morales’ help?

This would seem to be an obvious and brazen power play.

Once it was clear that Morales would not go along with DeVougas’ demands, DeVougas began talking about “slowing the [reappointment] process down.”  On December 13, with less than a month until Morales’ contract expired, “DeVougas publicly stated that he wanted more information from MPD so was in no rush to vote on the reappointment by the end of the year.”

Eventually, since DeVougas was flatly refusing to hold a reappointment hearing, two other FPC members used their procedural power to circumvent the chairman’s authority and schedule a hearing themselves.  During that meeting, Morales was reappointed to a four-year term in a 4-2 vote with one abstention.

One of the two “no” votes was Steven DeVougas.

Was this retaliation for Morales’ denial of DeVougas’ attempted bribe?  Sources connected with the investigation believe it was.

If, as both Morales and those sources allege, DeVougas did tie reappointment to the firing of Officer Collins, then DeVougas would appear to have violated Wisconsin Statute § 946.10, which makes bribery and attempted bribery of public officials a Class H felony punishable by a maximum sentence of six years in prison.

In an email, DeVougas vehemently denies any wrongdoing, saying “I categorically deny anything of the like and would like to see any evidence to the contrary that serves as the basis of this allegation.

“I am one vote on a commission of seven,” he continued, “so I wouldn’t have the power or authority to even make such an offer. In addition, it contradicts the role of the commission as an APPELLATE body. I have always respected the role of the chief to hand down discipline and my record reflects that.”

The Chief himself and numerous sources contradict this denial, though, maintaining that reappointment was tied to firing Collins.  Not only did DeVougas have the power to withhold scheduling a reappointment hearing (which he did), DeVougas has an immense amount of influence over other members and could have used his clout to convince them to oppose Morales’ reappointment.

Regardless of whether DeVougas’ behavior rose to the level of criminality, it was unethical, immoral, and renders him unfit to serve on the Milwaukee Fire and Police Commission.

If Milwaukee is truly serious about police reform, this is a great place to start.  Milwaukee Mayor Tom Barrett has the power to remove and replace DeVougas, and he should do so immediately.

If the rest of us are truly serious about police reform, we must demand that he do so because just as police officers are not above the law, neither are those who we entrust to govern them.