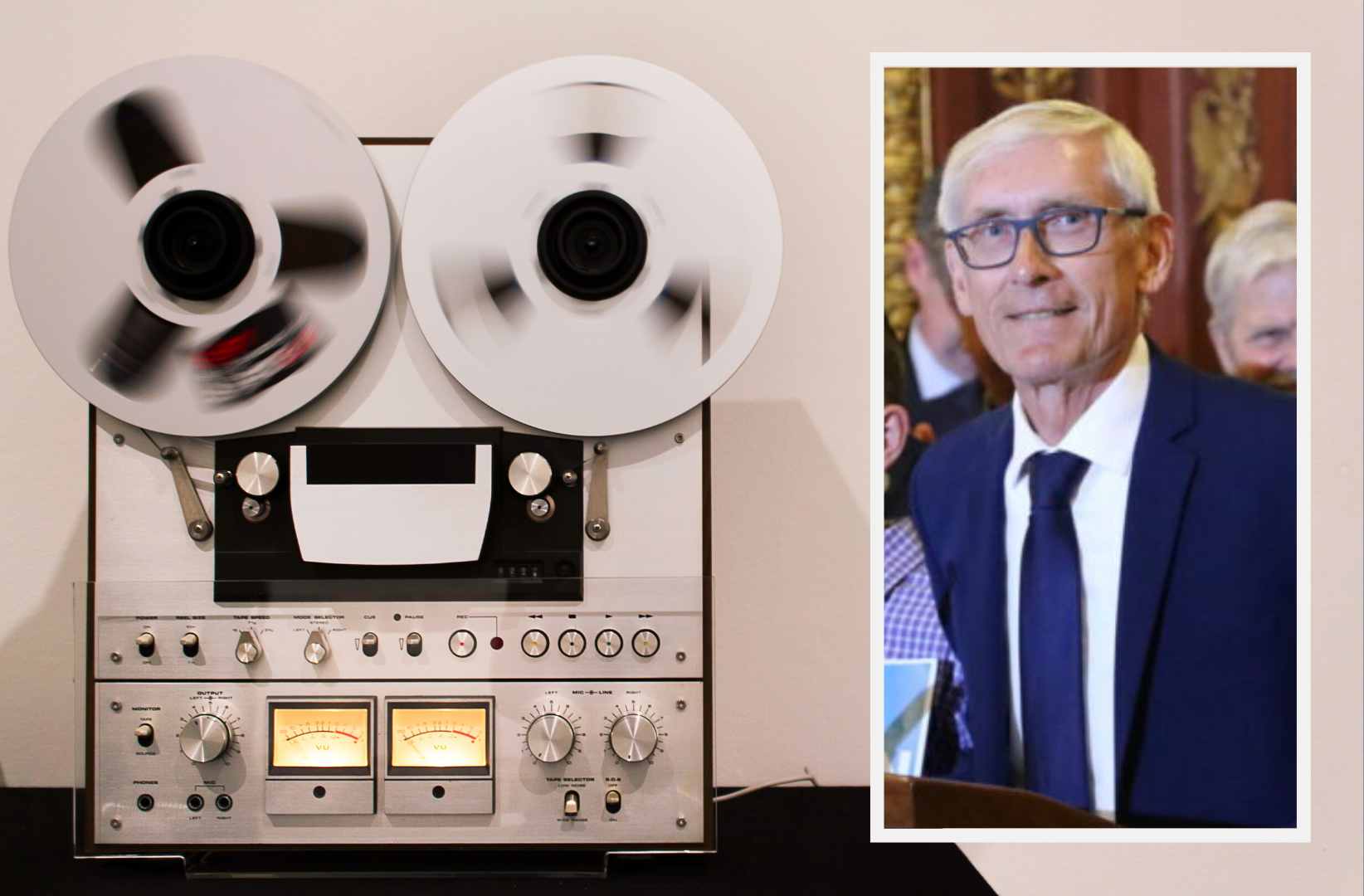 The revelation that the Evers Administration secretly recorded a conversation with legislative leaders reveals as much about the Team Evers’ sleaziness as it does about the corruption of a media that seems more concerned with protection than investigation.

“Mr. Butterfield, are you aware of any listening devices in the Oval Office of the President?”

The world held its collective breath as Alexander Butterfield, a little-known White House staffer, paused to reflect on what he had just been asked.

“I was aware of listening devices, yes sir,” he answered.

It was a watershed moment in the Watergate investigation that would eventually force Richard Nixon to resign in disgrace a little more than a year later.

Nearly a half century after Butterfield’s famous testimony before the Senate, Wisconsin Governor Tony Evers is embroiled in a secret taping scandal of his own.

Only this time, the world doesn’t seem to care.

Just days after Milwaukee Journal Sentinel reporters Molly Beck and Patrick Marley reported that Evers or someone on his staff had secretly recorded a conversation between the Democratic Governor and Republican Assembly Speaker Robin Vos and Senate Majority Leader Scott Fitzgerald, the media has all but abandoned the story.

Woodward and Bernstein Beck and Marley are not, since they seem to be working with Richard Milhous Evers to pretend that their bombshell never dropped.  In fact, the two have almost certainly been colluding with the Evers Administration since the moment the recorded call ended.

On May 14, the morning after the Wisconsin Supreme Court rescinded the Governor’s “Safer at Home” lockdown order, Evers called Vos and Fitzgerald to discuss the state’s next steps.  After exchanging pleasantries, Evers told the two Republicans that his Chief of Staff, Maggie Gau, and Chief Legal Counsel Ryan Nilsestuen were also on the call.

The three spent the call largely talking past one another, and Wisconsin reopened without any further plan from state government.

The next day, Beck made an unusual open records request.

“Under the provisions of the Wisconsin open records law,” she wrote in an email to Fitzgerald’s office, “I’m asking for access to inspect/copy any audio recording, written transcript or summary of a May 14 phone conversation between Assembly Speaker Robin Vos, Gov. Tony Evers, and Senate Majority Leader Scott Fitzgerald.”

Both Vos and Fitzgerald told News/Talk 1130 WISN that although they each receive hundreds of open records requests per year, this was the first time any report had ever asked for an “audio recording.”

Clearly, Beck had been tipped off that the call had been recorded.  Since neither Vos nor Fitzgerald knew they were being recorded, someone from the Evers Administration told Beck to make her request, which she also made of Vos and Evers.

Naturally, reporters will have sources within a given Administration, and having one of them give a tip is hardly scandalous, but the manner in which Beck and Marley used their recording makes it obvious that they have been working with Team Evers to embarrass Republicans.

Their first story on the existence of the same sort of recording system that helped bring down Nixon began thusly:

“Republican legislative leaders lashed out Wednesday at Democratic Gov. Tony Evers after his staff secretly recorded a May 14 phone conversation over how to respond to the coronavirus pandemic the day after the state Supreme Court struck down the state’s stay-at-home order.”

Republicans lashed out, eh?  At the possibly illegal recording of their private conversation?  What a revelation that they were angry about it.

The second story Beck and Marley published, a day later, read more like an opposition research hit than an actual news story.

“In secret recording, Vos says immigrant ‘culture’ was to blame for COVID-19 outbreak in Racine County,” screamed one of the more misleading headlines in recent memory.

Vos was actually saying what the Centers for Disease Control and Prevention (CDC) had been saying all along about the spread of Coronvirus: Immigrant populations are more at risk because they are more likely to live in multi-generational family homes.

It didn’t matter: Evers’ talking points were disseminated and Beck and Marley promptly stopped reporting on the existence of the recorded call.

The Journal Sentinel has not mentioned a word about it since.

One would think that such Nixonian targeting of political enemies might warrant some further investigation, but no, there will be no Alexander Butterfield moment here.

This is made all the more galling by the distinct possibility that Evers himself is covering up a serious crime.

Wisconsin Statute § 968.31(1) “generally prohibits any person from intercepting a wire, electronic, or oral communication or disclosing or using a communication that was illegally intercepted.”

Violation of this statute is a Class H felony punishable by a maximum penalty of six years in prison and $10,000 in fines.

This means that if Evers, Vos, Fitzgerald, Gau, or Nilsestuen—the parties to the conversation in question—recorded or had someone record the call, such a recording would be legal since Wisconsin is a “one-party consent” state.

“However, if another person in the governor’s office recorded the telephone call without the prior consent or authorization of the governor, Chief of Staff Gau, or Chief Legal Counsel Nilsestuen, then the person may well have violated Wis. Stat. § 968.31 (1) since the person was not a party to the communication,” the Legislative Fiscal Bureau wrote in a memo regarding the conversation.

Through a spokesperson, Evers denied recording the call and declined to name or punish the person who did.  Instead, he instructed his staff not to do it again.

In this respect, Evers is decidedly not Nixonian: This was less a Saturday Night Massacre than a Wednesday Morning Stern Lecture.

It also indicates that if Gau or Nilsestuen didn’t record the call or have a staffer record the call, then Evers is covering up felonious conduct by a member of his staff with enough access to the highest levels of power in the state that he or she could get close enough to the Governor and his closest aides to record them without their knowledge.

This, of course, is far less likely than Nilsestuen or, more probably, Gau recording the call with the deliberate intent of immediately leaking it to a friendly pair of reporters.

She would be a much less competent Deep Throat, however, since this fiasco makes her and her boss look downright sleazy (especially when one considers the small likelihood that this was the first conversation they ever recorded) while their own personal Woodward and Bernstein look like pathetic lap dogs rather than the noble watchdogs they imagine themselves to be.

Tellingly, neither Beck nor Marley nor any other reporter in the state has written a thing about the Evers Administration’s sleaziness since the day after it was revealed.  This, perhaps more than even Beck’s revealing open records request, demonstrates the level of collusion between the Wisconsin news media and the buffoonish gubernatorial administration they are desperate to protect.

Had this sort of corrupt symbiosis between government and media existed nearly half century ago, “Watergate” might today simply refer to a hotel.