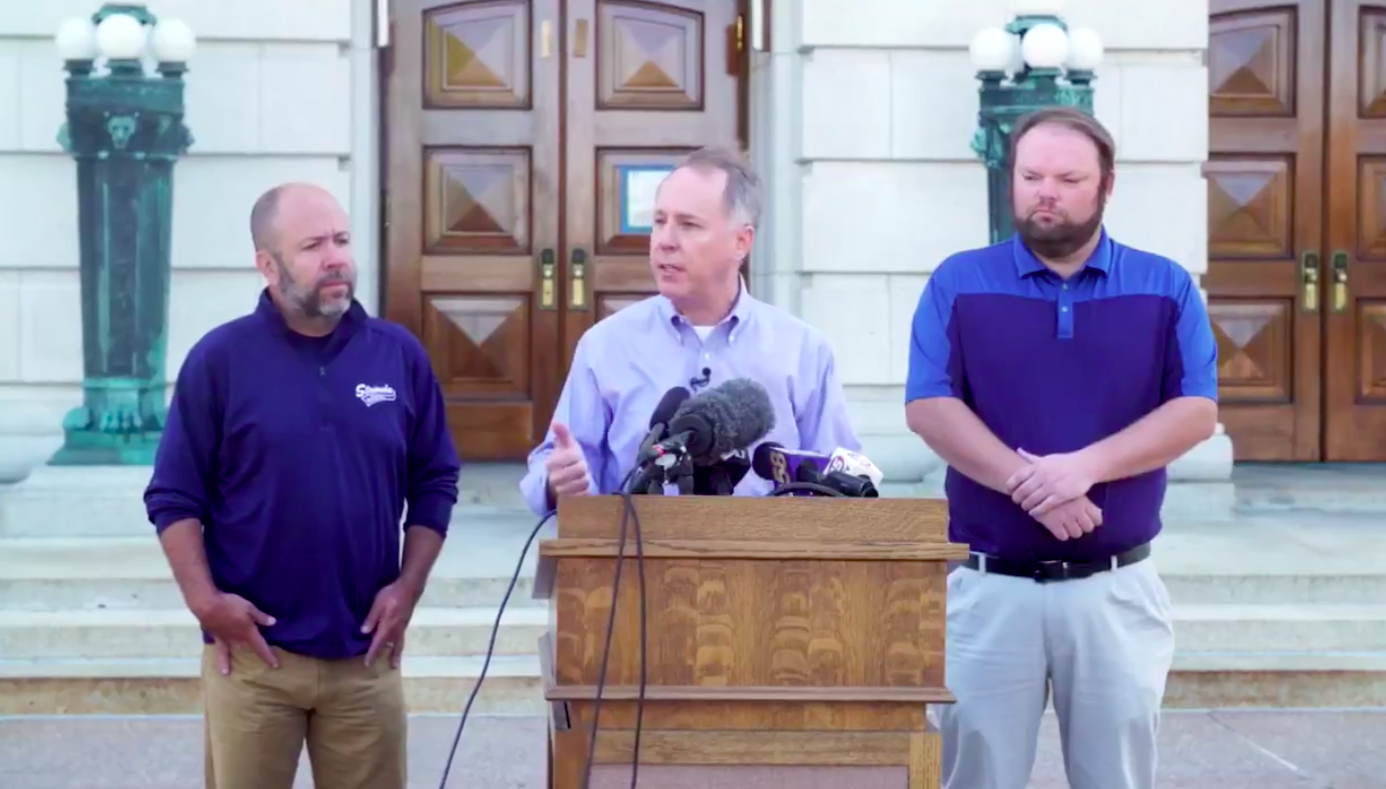 Violence, rioting, and destruction of public property rocked Madison on June 23. Wisconsin was left in a state of shock. Rioters attempted to break in to the State Capitol. State Senator Tim Carpenter took pictures of the rioting and was assaulted by the mob for doing so. A Molotov cocktail was thrown at a government building. The statues of “Forward” and Col. Hans Christian Heg were torn down. “Forward” was dragged into the middle of State Street, Col. Heg was thrown into Lake Monona.

The riot was allegedly triggered by the arrest of activist Devonere Johnson after he created a disturbance at Cooper’s Tavern on Capitol Square. He initially resisted arrest and escaped from the arresting officers twice before being transferred to the Dane County Jail.

The day after, Wisconsin’s elected officials reacted to the night of destruction. Below is a collection of what many had to say:

Speaker Robin Vos (R-Rochester), Assembly Majority Leader Jim Steineke (R-Kaukauna), and Speaker Pro Tempore Tyler August (R-Lake Geneva) gathered for a press conference the day after the riots. The conference can be viewed here via WisconsinEye. A few quotes from the conference:

Speaker Vos: “It should have never gotten to this point. When we look at the city of Madison where just a week ago, the Mayor had to apologize for making a video praising the police and the hard job that they do; we see that Governor Evers has basically stood silent until today when he did his walk-around to be able to see what was going on in Downtown Madison; State Street occurred weeks ago, and very little happened afterward. People have not been prosecuted, people have not been held accountable, and that has to change.”

Speaker Vos: “This should be something that we can hopefully get bipartisan consensus on, that crime is wrong, and that the people who commit it should be prosecuted.”

Rep. Steineke: “The rioters and the looters and the people that were perpetrating violence last night, we don’t care what they have to say. We’re not going to negotiate with terrorists. ”

So this is now what is acceptable in Madison? Where are the police? Did the Mayor instruct them not to engage the criminal protestors earlier? This is a world run by the mob without police protection. Beyond ridiculous. https://t.co/abWnraDZok

My advice to all Wisconsinites: Do not travel to @CityofMadison. It is unsafe and your lives could be in danger. The Mayor has lost control. @GovEvers refuses to take control. The weakest leadership I’ve ever witnessed. https://t.co/XA9OH9c447

This falls squarely on the shoulders of @GovEvers & his constant appeasement of some protestors that have shown no respect for law or for public or private property. His feckless, weak administration is standing by as our Capitol is constantly defaced. It’s frankly sickening. https://t.co/cLuTrJOlgR

We also cannot allow ourselves to forget the reason why these protests began: because of the murder of George Floyd, of Breonna Taylor, of the many Black lives taken before them, and because racism and structural inequality still pervade this country.

An innocent bystander, a state senator who has largely stood with the BLM movement, was attacked for watching and taking a picture. I am praying Tim will be okay.

This isn’t about protesting anymore. This is about mindless violence and destruction.

It's not bad enough that we have boarded up windows all down State St? Now our Capitol needs to be boarded up as well? This is wholly unacceptable, @GovEvers & you have allowed it despite cries for action by legislators WEEKS ago. https://t.co/M9UucX3Nmf

“This unfathomable display of weak leadership falls squarely at the feet of Gov. Evers and Madison’s mayor. Workers do not feel safe going to and from their jobs in the downtown area, with good reason as evidenced in the beating of Senator Carpenter. Wisconsinites are wondering where their governor is when his presence and response are most needed. And taxpayers now find themselves financially on the hook as a result of more violence and desecration of their state treasures.

.@GovEvers has demonstrated time and time again that he is unwilling to prevent these unrelenting attacks on our safety, our property and our way of life. His silence is deafening, and his inaction is unacceptable. Enough is enough. https://t.co/vAB8RRw7zM

“Radical extremists and their enablers – including Governor Evers – continue to refer to these outrageous mob tactics as ‘protest.’ They are not. Property damage, destruction and physical assault are not legitimate forms of political discourse. They are criminal acts.”

“The governor has demonstrated time and time again that he is unwilling to prevent these unrelenting attacks on our safety, our property and our way of life. His silence is deafening, and his inaction is unacceptable. If he cannot or will not regain control of the streets, he should resign immediately. Enough is enough.”

Ebony Anderson-Carter, a multi-group spokeswoman for the rioters, gave the groups’ demands to NBC15 on Wednesday morning. Their demands include releasing Devonere Johnson from the County Jail, firing Officer Matt Kenny, who shot and killed 19 year old Tony Robinson in 2015, and defunding the Madison Police Department. “Please don’t take the actions out here as violence,” Anderson-Carter said. “Take these actions as voices. We’re asking you for a dialogue.”

Really? Especially those on the proper side??? So, a person's position on political issues plays a role in how safe they should be?