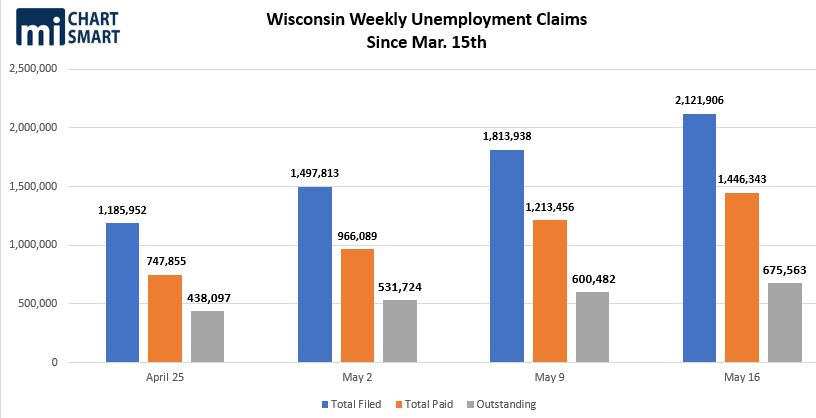 Sen. Steve Nass wants to know @WIWorkforce will be caught up on unpaid #unemploymentclaims. @CalebFrostman says sometime between August and October. (In October the UI Fund could run dry according to DWD: https://t.co/sq4QnOSQxl) #WIright

It was the most obvious consequence of shutting down the state’s entire economy – hundreds of thousands of workers in Wisconsin would suddenly need to file for unemployment. Unfortunately, that seemed to be an afterthought in the excitement of rolling out Gov. Tony Evers’ lockdown order, Safer at Home.

Unemployment in Wisconsin surged immediately after Evers declared a state of emergency on Mar. 12th. There was no lockdown order at that point, but even then, over 80,000 Wisconsin workers lost their jobs and had to file for unemployment benefits over the next ten days. That was a 1138 percent increase over the same time period in 2019.

The Department of Workforce Development’s (DWD) recognized right away that COVID-19 was the cause. However, DWD did not make any big changes at its call center to handle this increased demand. Instead, it highlighted the importance of in-person services at its job centers.

The Department of Workforce Development’s (DWD) first move was to shut down the job centers, including the computer labs where people without computers go to file for unemployment online.

Meanwhile, Gov. Tony Evers was about to give his shelter in place order, that would go into effect on Mar. 25th. The Department of Workforce Development’s (DWD) first move was to shut down the job centers, including the computer labs where people without computers go to file for unemployment.

“Our dedicated job center staff have been putting themselves and their families at risk each day while working directly with the public providing assistance at the job centers statewide,” DWD Secretary Caleb Frostman said on Mar. 24th. “We are focused on preventing the spread of COVID-19 while still providing our customers with the support and assistance they need to access unemployment and job search services remotely.”

All of DWD’s plans seemed to hinge on people being able to get online. There was jobcenterofwisconsin.com for basic employment assistance. There was a new webpage to help laid off workers connect with employers in essential industries. DWD even tried to steer people to its website to file unemployment claims.

DWD reacted by transferring 75 of its 1,606 full time employees to help out at the call center, bringing the total up to 132. It also boosted its call volume capacity up to 690 calls at a time, which meant more people would be able to wait on hold.

DWD reacted by transferring 75 of its 1,606 full time employees to help out at the call center, bringing the total up to 132.

DWD’s unemployment line got 1.5 million attempted calls during the first week of Safer at Home, but only 115,679 people successfully filed a claim. Not all of those claims were filed over the phone. DWD begged people to file online, citing a 98 percent success rate for the 19,000 who did.

With the call center completely overwhelmed by demand, Frostman added another 18 people to its staff during the second week of the shutdown. That brought the total up to 150. Even though DWD still had over 1,400 full time employees not working at the call center, it announced plans to hire 85 new employees to help process unemployment paperwork.

Frostman said out of date IT infrastructure was the problem, and it “has forced DWD’s staff to work overtime, nights, and weekends to process unemployment claims to support out-of-work Wisconsinites.” 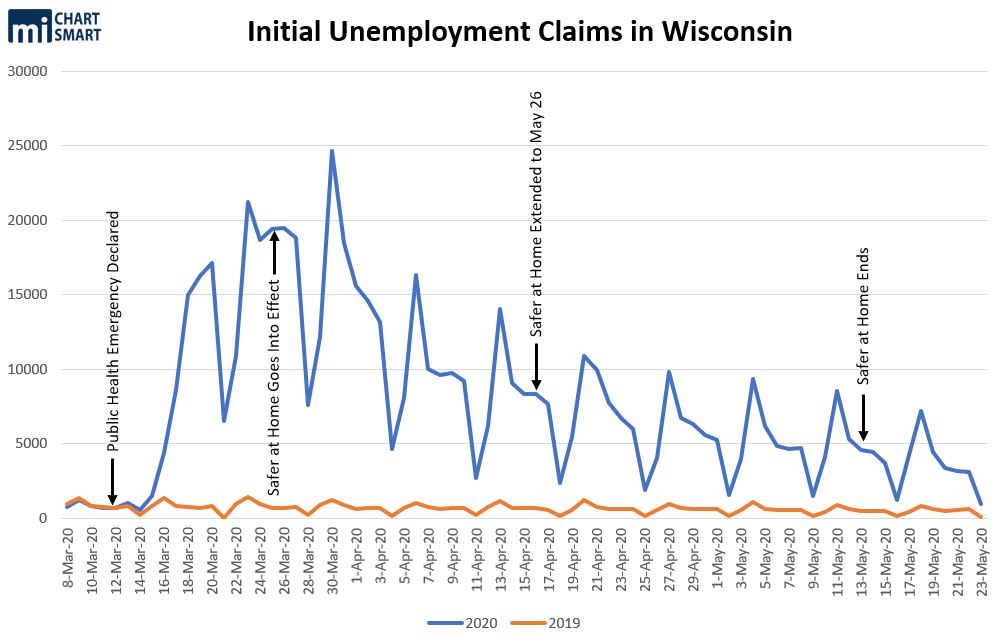 Right before the public health emergency in mid-March, the unemployment rate in Wisconsin had dropped down to 3.4 percent. Over the next 6 weeks, that skyrocketed to 14.1 percent.

According to DWD, Wisconsin lost 328,484 jobs during March and April, while unemployment grew to 449,312. However, those numbers don’t seem to have captured the full scope of the situation. There were 564,075 new applications for unemployment benefits in Wisconsin from Mar. 15th to May 9th.

Even after people successfully applied for benefits, DWD was falling further and further behind trying to pay them. On Apr. 25th there were 438,097 weekly claims in its backlog. By May 9th, the backlog had grown to 600,482.

“We hear from thousands of people every day who are struggling to pay bills and keep food on the table,” DWD Secretary Caleb Frostman said.

It was no secret to Sec. Frostman that people were suffering because of his agency’s inability to successful cope with the crisis.

“We hear from thousands of people every day who are struggling to pay bills and keep food on the table,” DWD Secretary Caleb Frostman said. “Our collective sense of urgency could not be greater to process claims and resolve issues so out-of-work Wisconsinites can return to some semblance of economic normalcy. Hundreds of DWD staff are working overtime to process claims, integrate new federal programs, disburse benefits, answer questions, and update IT and telecom processes to help as many people as possible during this unprecedented time.”

And yet, the phones still shut off at 3:30 Monday through Friday. 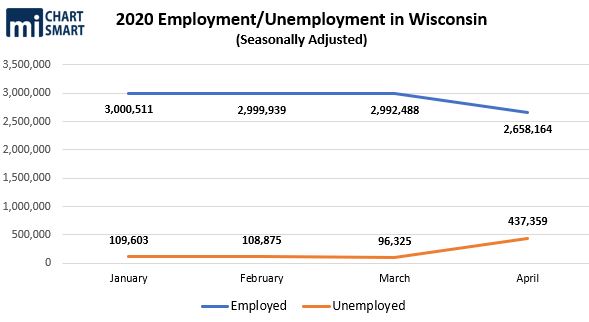 On May 15th, after Wisconsin workers had been lining up for unemployment benefits for two months, Frostman finally announced that DWD would extend its phone bank hours to 5:00 pm. Monday to Friday.

DWD hired two vendors to run call centers for the state. That would immediately bring another 55 people on board to handle standard unemployment claims, and eventually reach 500 workers answering the phones. Another 40 people would be dedicated to processing Federal Pandemic Unemployment Compensation (FPUC) payments, an extra $600 for qualifying workers from the CARES Act. A third vendor had 100 workers to adjudicate claims.

At the same time, DWD continued to insist that it was reassigning “hundreds” of staff members from within its 1,606-employee agency, but the official numbers it provided never backed that up. When Safer at Home went into effect, there were only 57 workers answering phones at the state’s unemployment call center. That only went up to 132 the next week, and 150 the week after that. DWD stopped providing specific numbers of the transfers in early April. The focus instead seemed to shift to hiring 315 new state employees to work at the call center.

Even with almost 440,000 people out of work, DWD was only sending out about 230,000 unemployment checks each week.

That week, DWD cleared out its backlog for FPUC payments, but it fell even further behind paying out regular unemployment benefits. The backlog on May 9th was 600,482. On May 16th it had grown to 675,563.

Even with almost 440,000 people out of work, DWD was only sending out about 230,000 unemployment checks each week.

During a Senate hearing on May 28th, Sec. Frostman said that DWD might not get caught up on paying unemployment claims until October.

End of the Line

On May 7th, DWD began warning that Wisconsin’s unemployment trust fund would not last forever. At that time, the fund balance stood at $1.9 billion. It would all be gone by Oct. 11th, if unemployment claims averaged just 255,000 a week.

The projections left a lot of factors out, including future employer contributions to the fund. However, it also did not mention the hundreds of thousands of outstanding claims. It also did not address that Gov. Evers promised back payments to everyone still attempting to file old claims, who can’t get through to the unemployment call center.