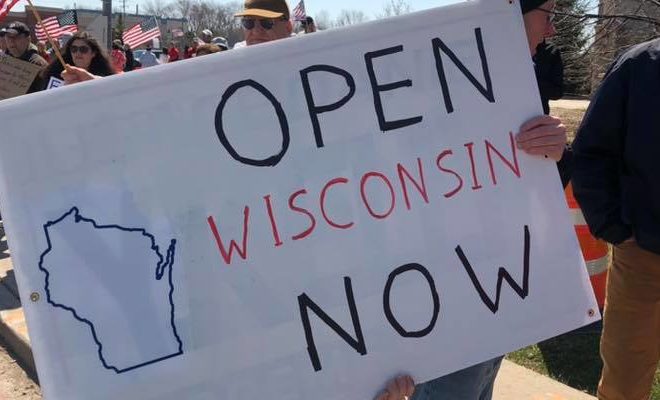 “Irony” might just be the most misunderstood word in the English language.  It does not mean “coincidence” and it is not—as Alanis Morissette misled an entire generation to believe—a bummer such as “rain on your wedding day.”

On Wednesday, the Wisconsin Supreme Court rained on the parade of increasing tyrannical decisions coming from Palm by striking down her “Safer at Home” order.

“[Palm] broke the law when she issued [“Safer at Home”] after failing to follow emergency rule procedures,” the Court wrote in a 4-3 majority opinion that was as notable for what it didn’t say as for what it did.

Because of the narrow question put before the Court in the State Legislature’s lawsuit, absent was a broader decision on the constitutionality of lengthy government-mandated shutdowns and quarantines that infringe on the most basic rights of the citizenry.

Instead, the Court was asked only whether Palm failed to follow the law governing rulemaking procedures by state agencies and, “even if rulemaking were not required,” whether “Palm exceeded her authority by ordering everyone to stay home, closing all ‘non-essential’ businesses, prohibiting private gatherings of any number of people who are not part of a single household, and forbidding all ‘non-essential’ travel.”

While some may have preferred a broader challenge to the constitutionality of pretty much everything the Evers Administration has done since first shutting down the state more than two months ago, the Legislature was wise to avoid these broader questions since it was so patently obvious that Palm violated the law when she issued “Safer at Home.”

Wisconsin Statute § 227.04 governs emergency rules such as Palm’s, and provides that “an agency may…promulgate a rule as an emergency rule without complying with the notice, hearing, and publication requirements under this chapter if preservation of the public peace, health, safety, or welfare necessitates putting the rule into effect prior to the time it would take effect if the agency complied with the procedures.”

This is limited, however, by Wisconsin Statute § 227.06, which subjects those rules promulgated by state agencies to legislative review by “the joint committee for review of administrative rules.”

Needless to say, Palm never gave the Legislature the chance to review “Safer at Home.”  It merely took effect with the force of law (and 30 days in jail and $250 in fines as potential penalties for violations) as soon as she signed it.  The Legislature was wholly shut out of the legally mandated rulemaking process.

“Rulemaking exists,” the Supreme Court notes, “precisely to ensure that kind of controlling, subjective judgment asserted by one unelected official, Palm, is not imposed in Wisconsin.”

In shutting the Legislature out of the process, Palm not only usurped its constitutionally mandated authority, she granted herself nearly limitless authority to govern the state as she sees fit during any and all disease outbreaks.

Here one might be tempted to ask if it’s ironic that the state’s actual Governor, Tony Evers, is a mere afterthought in the Court’s discussion of executive power.

All power, though, really does rest with Palm in the eyes of the Evers Administration—even the power to essentially make laws without having to jump through the procedural hoops that the Legislature does every time it wants to do something as trivial as rename a state building.

Palm rather laughably claims that the existence of a viral outbreak gives her the nearly godlike power to regulate nearly every aspect of every Wisconsinite’s life.

As the Court explains, “the people consent to the Legislature making laws because they have faith that the procedural hurdles required to pass legislation limit the ability of the Legislature to infringe on their rights.”

There is no such limit on the ability of a Health Secretary (who hasn’t yet been confirmed by the State Senate) to infringe on individual rights with her mere signature on an order.

“Palm cannot point to any procedural safeguards on the power she claims,” the Court admonishes. “At oral argument, she continuously referenced judicial review; but judicial review takes place after an allegation is made that an individual’s rights have been violated.  That is why our case law consistently speaks of ‘procedural and judicial safeguards.’”

Since those procedural safeguards were willfully violated when Palm refused to submit her “Safer at Home” order to the legally-mandated rulemaking process, the rule she promulgated was itself unlawful.

Just as troublingly, the Court found, Palm vastly overstepped the authority she claimed that Wisconsin Statute § 252.02 gives her to control outbreaks of disease.

“For example,” the Court writes, “[‘Safer at Home’] exceeds the § 252.02(4) authority to quarantine those infected or suspected of being infected.  Instead, Palm quarantines ‘[a]ll individuals present within the State of Wisconsin’ by ordering them ‘to stay at home or at their place of residence’ with exceptions she deems appropriate.

“She also prohibits ‘all public and private gatherings of any number of people that are not part of a single household or living unit.’  Again, this directive is not based on persons infected or suspected of being infected.”

Similarly, in banning “all forms of travel…except for essential travel,” Palm grossly overreached her authority to, as Wis. Stat. § 252.02(4) allows, “guard against the introduction of any communicable disease into the state.”

Her order, the Court concludes, “goes well beyond entry of communicable disease into the state.  It prevents ‘all forms of travel,’ not simply interstate travel.

“Furthermore, nothing in § 252.02(4) permits Palm to close ‘all for-profit and non-profit businesses with a facility in Wisconsin, except [those Palm defies as essential businesses and operations].’  She cites no authority for this vast seizure of power.”

This, of course, is because she has none…save for the authority she has granted herself in what is without a doubt the closest Wisconsin has ever come to the very definition of tyrannical governance.

If the power of an unelected, unconfirmed government bureaucrat can exceed that of her boss, the (alleged) Governor of the state, and she can claim for herself the lawmaking authority of the Legislature without even the procedural safeguard of legislative oversight available to stop her, then what exactly are the limits on her power?

Here one might be tempted to ask if it’s ironic that the nearest Wisconsin has ever come to seeing a military strongman looks more like a school librarian.

Her thirst for power, though, is apparently just as unquenchable.  Simply put, she needed to be stopped, and so did the entire Evers Administration that she now seems to control.  What’s ironic is that her undoing was that she couldn’t follow the rules for setting her draconian rules.

Would-be tyrants never can, and while the Court didn’t deliver the stinging rebuke that constitutional purists might have hoped for, it effectively freed Wisconsin from the shackles of bureaucratic despotism.

The true irony is that while the Court fastidiously avoided the broader questions of individual liberty, its ruling gave Wisconsin its freedom back.