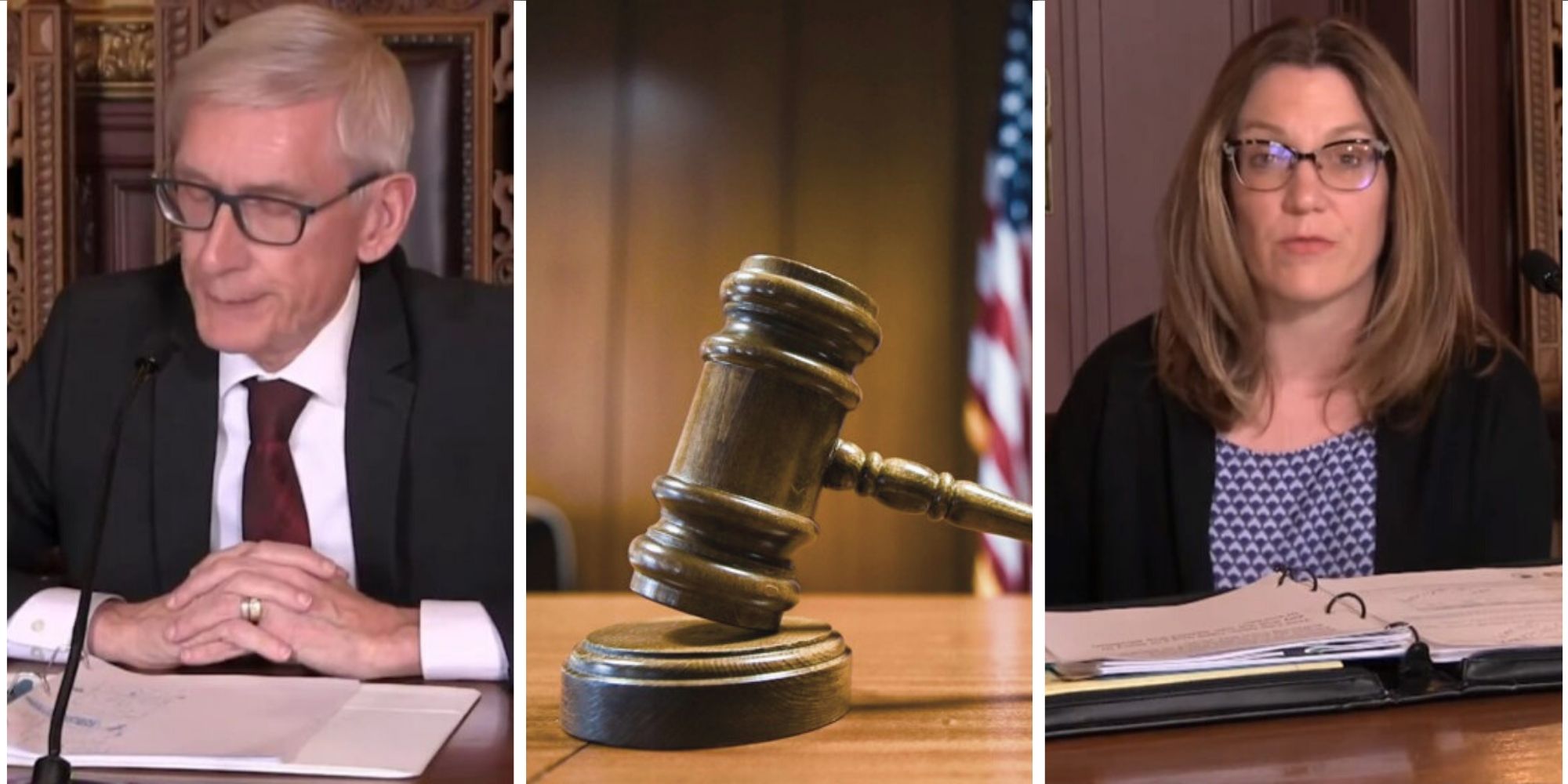 Dan O’Donnell presents the most in-depth, thorough takedown of Governor Evers’ out-of-control Health Services Department that you’ll read anywhere. The Supreme Court simply has no choice but to put a stop to this.

What could better explain Wisconsin Governor Tony Evers’ comically exaggerated response to the Legislature’s lawsuit challenging his authority to extend his “Safer at Home” order effectively shutting down the state?

“This isn’t a game,” he tweeted immediately after the suit was filed.  “This isn’t funny. People die every day because of this virus—oftentimes painful and lonely deaths—and the more we delay or play political games the more people die.”

Suffice it to say he has neither the facts nor the law to pound.

“This lawsuit puts people’s lives at risk by trying to take away Safer at Home, the best and most effective tool we have to save lives and prevent our hospitals from being overrun,” Evers added in a statement accompanying his Administration’s official response to the suit.

That response relies on a spectacular misinterpretation of Wisconsin Statute § 252.02 that pretends that the Governor’s Health Services Secretary has greater constitutional authority than the Governor.

The statute provides that the Department of Health Services (DHS) “may close schools and forbid public gatherings in schools, churches, and other places to control outbreaks and epidemics” and “may authorize and implement all emergency measures necessary to control communicable diseases.”

This is not a blanket authority.  Rather, it is dependent upon the existence of an actual emergency.  An “emergency measure” is by definition one that is taken during an emergency.  On March 12, Governor Evers signed Executive Order 72 declaring that a state of emergency existed in Wisconsin because of the Coronavirus outbreak.

Specifically, he declared that Wisconsin faced a “public health emergency,” which is defined by Wisconsin Statute § 323.02(16) as “the occurrence or imminent threat of an illness or health condition” that “is believed to be caused by bioterrorism or a novel or previously controlled or eradicated biological agent” and will cause “a large number of deaths or serious or long-term disabilities among humans” as well as a “significant risk of substantial future harm to a large number of people.”

The “emergency” to which Wisconsin Statute § 252.02 rather obviously refers is a “public health emergency.”

This is simply common sense.  If there is no public health emergency, then there can be no governmental response to an emergency

Governor Evers understood this when he signed Executive Order 72, as it designated the “Department of Health Services as the lead agency to respond to this health emergency” and authorized it to “take all necessary and appropriate measures to prevent and respond to incidents of COVID-19 in the State.”

This authority is not absolute.  It is subject to the same legal and constitutional restrictions as any other department of Wisconsin’s Executive Branch.

The most obvious and glaring of these restrictions is Wisconsin Statute § 323.10, which Evers referenced in Executive Order 72 as granting him the authority to declare a public health emergency and provides that “if the governor determines that a public health emergency exists, he or she may issue an executive order declaring a state of emergency related to public health for the state or any portion of the state and may designate the department of health services as the lead state agency to respond to that emergency.”

This statute is crystal clear: Without approval by the Wisconsin Legislature, the public health emergency no longer exists 60 days after it is signed into law.  Since the DHS’ authority as the “lead agency to respond to that emergency” derives from the existence of that emergency, once the emergency no longer legally exists, the DHS by definition can no longer “authorize and implement all emergency measures necessary” to get the disease under control.

This is simply common sense.  If there is no public health emergency, then there can be no governmental response to an emergency—especially when that response involves such dramatic infringement on basic constitutional rights of individuals to assemble, associate, and freely exercise religion.

The Evers Administration, though, pretends that these limits don’t apply to the Department of Health Services.

“It is well-accepted that statutes like Wis. Stat. § 252.02 provide broad grants of authority to respond to a very rare and narrow type of crisis—the very one we now face with a rapid spread of a novel communicable disease,” the Administration wrote in its response to the Legislature’s lawsuit. “Wisconsin’s version of these laws, in section 252.02, does just that.  It gives DHS flexible powers to address the specific threat of a rapidly spreading disease.

“That makes sense: this Court has long acknowledged the commonsense proposition that public health officials must be able to react swiftly and effectively in the face of an imminent or existing crisis.”

This language is critical.  Once the public health emergency expires, there is no longer by definition an “imminent or existing crisis” to which DHS can respond.

Governor Evers has spent a week framing the debate in apocalyptic terms while all but ignoring substantive legal arguments. Neither the facts nor the law is on his side.

Consider this: Wisconsin faced an outbreak of Rhinovirus this past winter.  It was widespread and highly contagious.  Without a declared public health emergency, could DHS have closed schools, shuttered businesses, and locked worshippers out of churches to stop the spread of the Rhinovirus?  Under the Evers Administration’s logic, it could have.  This, of course, is ridiculous because Rhinovirus is the common cold.

It is frankly ridiculous to interpret Wis. Stat. § 252.02 as giving the DHS Secretary emergency powers that aren’t contingent on the existence of an actual emergency and as such are theoretically limitless.

Rather hilariously, though, the Evers Administration acknowledges in its lawsuit response that DHS’ authority is limited by the existence of an emergency—but not an emergency as defined in Wisconsin law, but a law as defined in Webster’s Dictionary.

“Of course, DHS’s authority under section 252.02(6) is not boundless; the statute provides limits on the agency’s power,” the Evers Administration wrote.  “First, DHS may exercise its authority under Wis. Stat. § 252.02(6) only in an “emergency”—a “serious situation or occurrence that happens unexpectedly and demands immediate action.” Emergency, Webster’s Third International Dictionary (1961).”

Yes, really.  Even though a “public health emergency” is clearly and narrowly defined by Wis. Stat. § 323.02(16), the Administration chooses instead to use the broad definition included in the dictionary.  The level of willful ignorance on display here is almost mind-boggling.

As the Legislature asserts in its petition to the Wisconsin Supreme, DHS Secretary Andrea Palm’s “go-it-alone shutdown authority has no expiration date—making it greater than even the Governor’s emergency powers.  To be sure, Emergency Order 28 [which extended ‘Safer at Home’] says it terminates on May 26, but nothing suggests that it won’t be extended again.

Truthfully, the State is already in shambles, primarily because of the arbitrary and capricious nature by which DHS determined which businesses were “essential” and could stay open and which were “non-essential” and were forced to close.

“Perhaps it will even run into 2021. In any case, by the time the Secretary sees fit to lift her decree (be it in five weeks or eight months), many Wisconsinites will have lost their jobs, and many companies will have gone under, to say nothing of the Order’s countless other downstream societal effects. Our State will be in shambles.”

Truthfully, the State is already in shambles, primarily because of the arbitrary and capricious nature by which DHS determined which businesses were “essential” and could stay open and which were “non-essential” and were forced to close.

Under federal law known as the Administrative Procedure Act, when determining whether an administrative rule such as the extension of the Safer at Home order, “the reviewing court shall . . . set aside agency action, findings and conclusions found to be arbitrary, capricious, an abuse of discretion, or otherwise not in accordance with law.”

Courts in Wisconsin have determined that an action is arbitrary and capricious if it “lacks a rational basis and is the result of an unconsidered, willful or irrational choice rather than a ‘sifting and winnowing’ process.”

Could there have been anything more unconsidered or irrational than DHS’ determination of what constituted an “essential” business?

As the Legislature notes, its “Order does not explain, for example, why bars and convenience stores may sell alcohol, but retailers are prohibited from selling clothes or shoes.

“The Order similarly fails to provide any justification for allowing arts and craft stores to operate, but not furniture stores. In short, DHS has provided no reasoned basis that could justify its ad-hoc micro-managing of Wisconsin’s economy.”

Far more troubling is the arbitrary and capricious nature by which DHS has determined which First Amendment-protected activities are essential and which are not.  For instance, “‘newspapers, television, radio, and other media services’ are allowed to operate as ‘essential businesses,’ even though printing newspapers and producing television and radio shows entail daily human contact—but churches, mosques, and synagogues cannot hold weekly religious services with more than nine people in a room, even if the services could be conducted in accordance with social-distancing guidelines.”

“Hammering home the arbitrary and capricious nature of this discrepancy is the fact that DHS never bothers to explain why it is necessary to prohibit weekly religious gatherings, or limit weddings and funerals to 10 people, when daycare centers are permitted to operate with up to 50 children and 10 employees.”

Similarly, DHS bans the freedom of assembly and the petitioning of the government for the redress of grievances by prohibiting all “peaceful protests and political campaigning, regardless whether those activities could be conducted in compliance with social distancing guidelines.”

The freedom of association is also arbitrarily and capriciously infringed upon, as DHS has instituted a blanket ban on “all private gatherings of any number of people that are not part of a single household or living unit,” especially since, as the Legislature notes, “DHS has not provided any evidence that such gatherings—which are important for maintaining social bonds and emotional well-being—present any greater risk of spreading infection than the operation of ‘essential’ businesses.”

Any infringement on these rights of assembly, association, and the free exercise of religion requires an application of what is known in the law as strict scrutiny review.  Also called the “least restrictive means” test, it provides that for any government action (emergency or otherwise) to be constitutional, it must seek to serve a “compelling government interest,” be “narrowly tailored” to serving that interest, and be the “least restrictive means” of serving that interest.

Obviously, DHS has a compelling interest in stopping or slowing the spread of COVID-19 and while it may be argued that its “Safer at Home” order is narrowly tailored to that interest, a blanket shutdown of much of the state is most certainly not the least restrictive means to serving this interest.  If it were, churches, mosques, and synagogues would operate under the same rules as day care centers, Walmarts, and arts and craft stores.  Visits to Grandma’s house would operate under the same rules as visits to a liquor store.

DHS’ order at once represents a grossly unconstitutional infringement on individual rights, an arbitrary and capricious application of draconian restrictions on the citizenry, and a blatant violation of Wisconsin law governing emergency powers.

Governor Evers seems to understand this, which is why he has spent a week framing the debate in apocalyptic terms while all but ignoring substantive legal arguments.  Neither the facts nor the law is on his side, so he is pounding the table by claiming (without evidence) that people will die if the Supreme Court rules against him.

That isn’t an actual argument at all.  It’s a temper tantrum.  And it’s one that the Supreme Court should thoroughly and summarily reject.