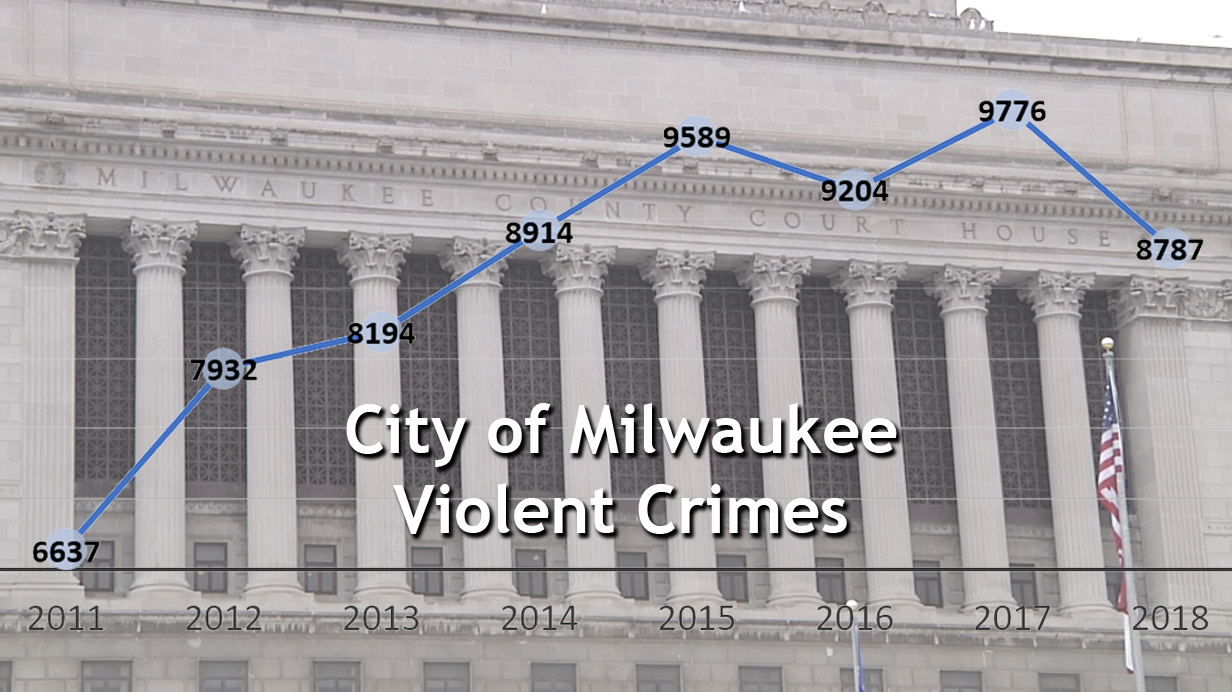 Violent crime in Milwaukee skyrockets since shift to “alternatives to incarceration”

When Marcel Vanlandingham allegedly walked out of the Milwaukee County Courthouse in September, pulled out a gun, and shot a man twice right on Wells Street in broad daylight – it was another indication something is very wrong with Milwaukee’s criminal justice system.

Vanlandingham was supposed to be in jail at the time, and he was not allowed to possess any firearms for a year. He had been convicted of disorderly conduct at the start of the month, but the judge stayed his 30-day jail sentence.

After this new high-profile incident, the court system hardly got tough on him. Vanlandingham was charged only with “2nd Degree Reckless Endangering Safety,” given a mere $40,000 cash bond, and was turned over to a self-described social justice non-profit called Justice Point for supervision and GPS monitoring. Furthermore, if the group didn’t have any GPS monitors available, the judge said Vanlandingham should be released anyway as long as he could make bail.

All of this might be troubling, but it is not at all surprising. The county is very upfront that its goal is not putting criminals behind bars. Its goal is actually to reduce the amount of time they spend in jail.

“For far too long, the misuse and overuse of jails has taken a heavy toll on families and communities. In Milwaukee County, we are committed to changing that,” according to the county’s website.

Since 2011, that belief has driven multiple alternative to incarceration programs that have “saved an estimated 17,205 jail bed days” in 2018 alone, according to Milwaukee County’s 2020 budget recommendations.

And so, Milwaukee judges almost always give defendants the opportunity to go free during their bail hearings regardless of the crime. This usually involves placing them under the supervision of Justice Point.

So far this year, there have been 19 people charged with 1st degree intentional homicide in Milwaukee County. Judges ordered all of them to be “turned over” to Justice Point for supervision.

When it comes to crimes like felony hit and run, defendants are often released without any kind of supervision at all.

Judges also ordered 53 people charged with 1st degree sexual assault of a child be “turned over” to Justice Point for supervision. In 11 of those cases, the victim was under 12 years old. Some of the defendants were described in court records as “habitual repeaters.”

Of course, these defendants have to make bail first, which Milwaukee judges ensure is set shockingly low. For 1st degree sexual assault of child it’s as low as $750, and for 1st degree intentional homicide it’s just $100,000.

The list of defendants entrusted to the supervision of Justice Point also includes hundreds of people charged with armed robbery, arson, burglary, felon in possession of a firearm, bail jumping, etc.

When it comes to crimes like felony hit and run, defendants are often released without any kind of supervision at all. So far this year, judges have released 11 of 31 defendants charged with hit and run involving injury or great bodily harm without supervision. Their bail was set as low as $250. 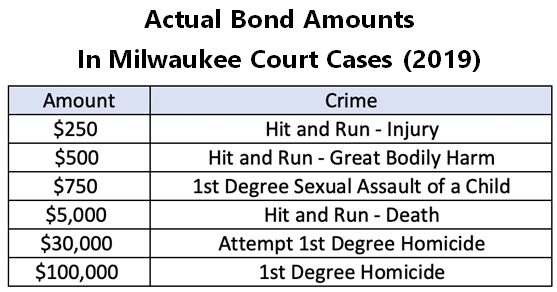 Additionally, there have been 5 felony hit and run cases involving death. One defendant, Christopher M. Grosskreuz is accused of running over a woman in a West Allis alley and leaving her to die. Video evidence showed his vehicle drug her body. He was released with minimal supervision and a mere $5,000 signature bond.

In 2017, almost half of the defendants ordered to level 5 supervision made bail and were released from jail before their trial. Of these 556 individuals, approximately 86 of them missed a court appearance, 63 committed a new crime, and 17 committed a new violent crime. It was Justice Point’s job to make sure that did not happen. 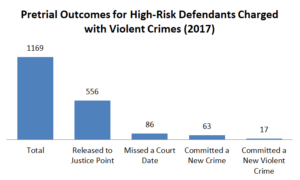 Milwaukee County has been contracting with Justice Point since 2013, when it approved two contracts with the group. Both were initiated by Judge Jeffrey Kremers.

Justice Point’s cofounder, Nick Sayner, sat on the county’s policy team that came up with the contract requirements.

One contract was for $300,000 to set up an “Early Interventions Central Liaison Unit.” The funding came from the United States Bureau of Justice Assistance for Justice Reinvestment Initiative, which was created in partnership with Pew Charitable Trusts to “reduce prison populations or avert future growth, generating savings while enhancing public safety.”

The other was a $1.6 million contract for the “Pretrial Supervision/Pretrial Electronic Monitoring/Release Planning program.” That was part of the “Evidence Based Decision Making (EBDM) Initiative” from the National Institute of Corrections (NIC), which was partnered with the MacArthur Foundation.

According to county meeting records, Justice Point was the only vendor to bid for the contracts. It probably helped that Justice Point’s cofounder, Nick Sayner, sat on the county’s policy team that came up with the contract requirements in the first place.

Sayner was “asked by the [Milwaukee Community Justice Council] executive committee to serve on the Evidence Based Decision Making policy team and was soon selected to co-chair a working sub-committee focusing on pretrial services,” according to Justice Point’s staff biography page.

The initiative was presented as a way to incorporate scientific research into the court’s decision making that would lead to lower crime rates. According NIC, this method would help judges decide whether or not to release defendants before their trial.

“[EBDM] has led to better decisions with respect to bail, pretrial supervision, and sentencing,” NIC claims in a primer for judges.

It wasn’t just Milwaukee County that bought into this initiative. The Wisconsin Department of Justice also partnered with NIC and in 2017 announced, “By applying EBDM principles, Wisconsin is better positioned to fully engage in meaningful criminal justice system improvement and signiﬁcant cost savings.”

Blowing Off the Contract

Behind the scenes, Milwaukee County’s contract with Justice Point has become a disaster.

First of all, Justice Point is required to file an annual report to the county every March containing summaries of all its programs, outcomes, trends, and demographics. Justice Point was unable to provide a report for 2018, and its 2017 report was incomplete.

Justice Point can’t deliver data on its data-driven initiative. What little data that is available shows Justice Point is failing to meet the terms of its contract.

This lack of data might be a problem considering the initiative is based entirely on the scientific application of data, but the court system says there is no cause for alarm.

“The 2017 report was limited due to building a new data system. Not all of the functionality was completed at the time the report was done,” according to Stephanie Garbo, Judicial Operations Manager-Pretrial. “The County agreed with Justice Point to not do a report for 2018, as we engaged with an outside entity for a comprehensive assessment, which is still underway.”

What little data that is available shows Justice Point is failing to meet the terms of its contract. Justice Point is required to ensure 90 percent of defendants make all their court appearances and less than 5 percent commit a new crime while under supervision. In 2017, only 85 percent made all their court appearances and 8 percent committed a new crime. In 2018, the number of defendants that committed a new crime while under Justice Point’s supervision jumped from 8 percent to 13 percent. 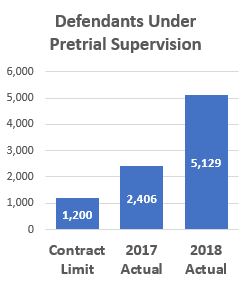 Garbo was the official who wrote the contract. It was also signed by Judge Maxine White and County Corporation Counsel Paul Kuglitsch. Neither showed any concern when asked about Justice Point’s potential violations of its contract with the county.

On the contrary, Milwaukee courts continue to place more and more defendants under Justice Point’s supervision. There are only supposed to be 1,200 defendants in the pretrial supervision program each year. However, the courts have the ability to exceed that limit, and they are. In 2017 there were 2,406 people in the program, and that grew to 5,129 people in 2018. That’s 327% more than the pretrial program was designed to handle.

The courts are also ignoring the limits placed on the GPS monitoring program. Only high-risk individuals charged for serious crimes are put on GPS monitoring. The annual limit is 90, but so far this year Justice Point has provided GPS monitoring for 273 defendants. Most of them have violated the terms of their monitoring at some point. The most common violation is leaving their “inclusion zone.”

“If electronic monitoring device is unavailable and cash bail has been paid, Defendant to be released and placed on the waiting list.”

However, even when they do require it as a condition of release, Milwaukee judges often express a take-it-or-leave-it attitude towards GPS monitoring. In six of the cases involving first degree intentional homicide, judges said, “If electronic monitoring device is unavailable and cash bail has been paid, Defendant to be released and placed on the waiting list.” They gave the same guidance in the majority of cases involving 1st degree sexual assault of a child.

In a way, Milwaukee County’s alternatives to incarceration programs have been a success – keeping in mind the goal was to reduce prison population, not reduce crime.

The county began prioritizing rehabilitation over incarceration in 2011. Between 2011 and 2017, violent crime in the City of Milwaukee increased 47 percent, according to the FBI. County jail admissions dropped by 18 percent during the same time frame according to the Department of Corrections. 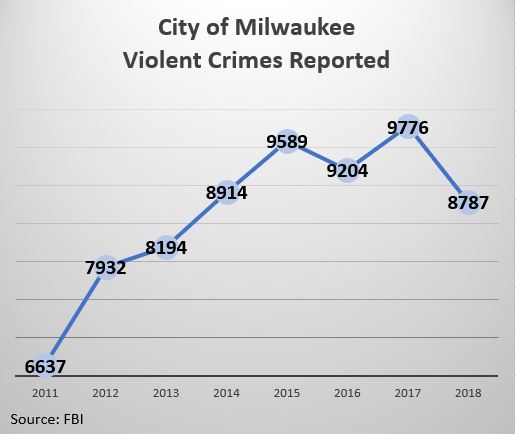 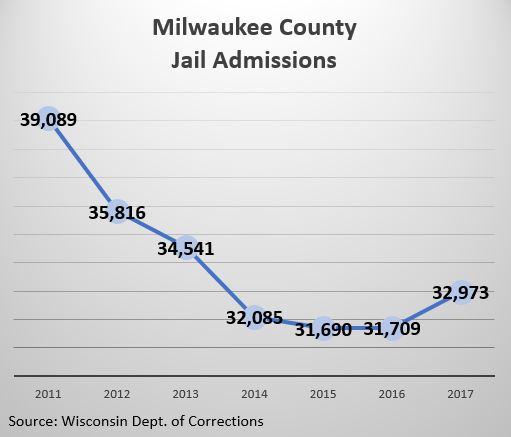 Despite all these shortcomings, Milwaukee County remains committed to Justice Point and Evidence Based Decision Making. It is again recommending almost $5 million be set aside in the 2020 to continue the program.