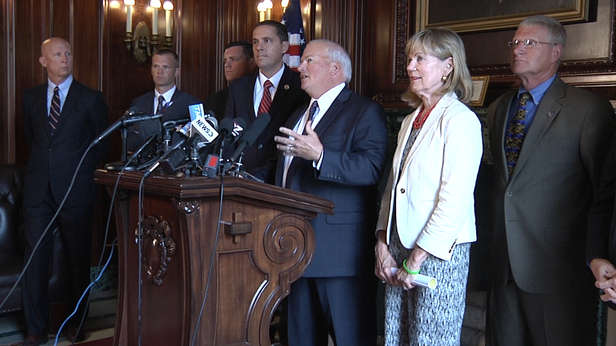 [Madison, Wisc…] Looking to get stalled budget negotiations “back on track,” Senate Republicans on Tuesday rolled out a budget blueprint that, not surprisingly, looks a good deal like Gov. Scott Walker’s two-year spending plan – but built on heftier borrowing.

“My point is to try to get the process back on track,” said the Juneau Republican, surrounded by seven members of his caucus at a Capitol press event that, like the budget process, was delayed.

The budget plan and the accompanying press conference were manifestations of a Senate caucus that has been toiling in recent weeks to complete the people’s business, even as the Assembly has lacked a “sense of urgency,” Fitzgerald asserted.

“There was nothing new in anything that they said. I found that kind of surprising. I thought there would be some kind of revelation,” Steineke told MacIver News Service.

Indeed, much is the same. The Senate plan includes the budget items already approved by the Legislature’s budget committee, staying true to much of the governor’s 2017-19 budget proposal.

The Senate trims about $427 million in all-funds spending from Walker’s version, with help in part from a reduction in 400-plus state jobs (255 of them at DOT). And it leans a lot heavier on borrowing than Walker’s original $500 million transportation bonding proposal. The Senate’s $712 million ask is significantly higher than the Republican governor’s $300 million transportation bonding compromise deal offered earlier this month as a negotiations spur.

Assembly Republicans have stood as dead set against that kind of bonding as Walker and Senate Republicans have been against gas tax hikes and vehicle fee increases. Fitzgerald said his caucus remains against “revenue enhancers,” and it would seem Assembly leadership isn’t budging on bonding.

Fitzgerald noted that the Senate has come down from its previous bonding position, of $850 million, thanks in large part to savings elsewhere.

“It’s unsustainable, a rounding error difference from what they proposed before,” the lawmaker said.

“It is impossible to pay for these projects in cash. It’s not smart to do that,” the River Hills Republican said. Darling added that the so-called mega transportation projects in southeast Wisconsin, which carry massive price tags, are vital to Wisconsin’s economy, and delays would only cost business opportunity – and, ultimately, taxpayers.

Fitzgerald asserts the Senate budget proposal keeps all of the mega projects on track, including the Interstate 94 east-west reconstruction project. Walker’s budget did not include planning money for the project, estimated to cost $1.1 billion.

As MacIver News Service’s Bill Osmulski reported this week, it is virtually impossible for state and local governments to fund highway projects without borrowing at some level.

“Without bonding, some projects would likely be delayed regardless of perceived need, and priorities would need to be reconsidered to assure the delivery of a balanced program within available resources,” stated the Wisconsin Transportation Finance and Policy Commission in its 2013 report to the governor and Legislature.

The piece also notes that governments impose borrowing limits, and Steineke and others worry Wisconsin may be crossing that threshold if it continues to bond hundreds of millions of dollars annually for transportation projects. They assert a more sustainable solution to Wisconsin’s transportation budget issues must be found. Such a solution, it seems, would involve motorists paying more at the pumps or for the privilege of driving their vehicles.

Total bonding in the Senate GOP plan approaches $900 million. On the transportation side, $350 million would come from general fund supported bonding, another $362 million from the segregated transportation fund.

The Senate proposal also eliminates three state taxes – the forestry/mill (state property) tax, the alternative minimum tax, and the personal property tax (in the second year of the biennium).

“The personal property tax is a burdensome tax on Main Street Wisconsin created in the 1840s. This repeal is long overdue,” said state Sen. Duey Stroebel, R-Saukeville in a statement.

Stroebel, who attended Tuesday’s press event, said the Republican focus should be on repealing taxes “rather than raise taxes.”

The Senate budget plan calls for $24 million more in K-12 spending than Walker’s generous education budget. Among other provisions, the proposal increases the revenue adjustment for low-spending school districts from the current $9,100 per pupil in the first year, going up $100 per pupil each subsequent year until it hits $9,800 in 2022-23. It’s similar to an Assembly education plan, but the increases are phased in over a longer period.

Senate Republicans also embrace the Assembly’s laptops-for-high-school-freshmen idea, although the Senate would provide half of the funding the Assembly proposed, or $9.2 million, attached to matching school district money. That giveaway would begin in the second year of the budget.

The Senate proposal also ups the income threshold for enrollment in the statewide school choice program to 220 percent of the poverty level, which would capture 550 new students. And it brings back a version of Walker’s lifetime teachers’ license proposal, an initiative that the Joint Committee on Finance stripped from Walker’s budget plan.

Walker spokesman Tom Evenson tweeted that the governor, “welcomes the initiative by the state Senate to move the process forward while keeping his priorities largely intact.”

.@GovWalker welcomes the initiative by the state Senate to move the process forward while keeping his priorities largely intact on … /1/

Speaker Robin Vos (R-Burlington), Steineke, and Rep. John Nygren (R-Marinette) made sure to note that Assembly Republicans “first put out a budget framework for transportation in January, a comprehensive tax and transportation plan in May, and an educational proposal in June.”

“It’s good to see Senate Republicans have solidified their positions and are ready to come back to the table to complete work on the state budget,” Assembly leadership stated. “Assembly Republicans will give the proposal fair consideration as requested.”

The lawmakers added that they appreciate Fitzgerald admitting that “additional revenue is needed for our roads; if not today, sometime in the future.”

The Senate majority leader said that increased funding may eventually be needed, but not until the Legislature gets a handle on the troubled state Department of Transportation.

“As we look at the DOT, there’s a lot of members who have talked to me, and we’re not comfortable putting more money, that is increasing revenue, into that agency until we feel comfortable with that agency and the decisions the DOT is making,” Fitzgerald said.

He readily acknowledges that he doesn’t have the 17 votes required to pass the budget proposal, mainly because of smaller, “parochial” issues. And he doesn’t have a “Plan B” if Assembly Republicans reject the proposal outright. Fitzgerald said the plan is about jump-starting a stalled budget process.

In a letter to Vos, Fitzgerald says his caucus believes the “proffered solution presents a reasonable compromise on the major outstanding issues.”

“Furthermore, we have confirmed that Governor Walker believes this proposal meets his key priorities of funding K-12 education, holding the line on property taxes, and insuring sound investments in transportation without raising taxes,” the majority leader wrote.

The governor has the power of the veto pen, and the support of the Senate. So what’s the Assembly’s next move?

“They have to understand, and I think the speaker understands, that it has to be something that’s going to be palatable to the Senate and certainly to the governor at this point,” Fitzgerald said at the press conference. “I’m hoping they take kind of a measured approach to how they do that.”