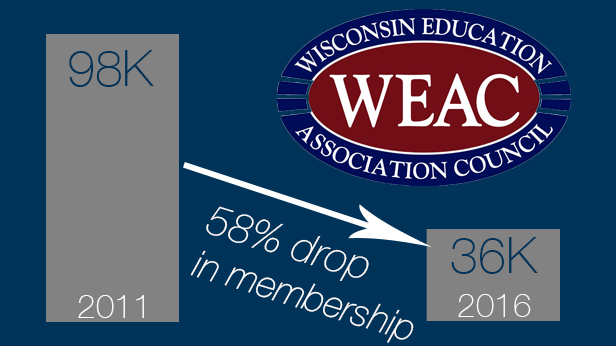 [Madison, Wis…] More than 58 percent of active union members left the Wisconsin Education Association Council (WEAC) since 2011, according to a new study by the Education Intelligence Agency. The drop in membership is the largest percentage change in the country over the last five years.

The trend continues at the national level. Twenty-eight states reported union membership losses in 2015. More then 12,000 active members left the National Education Council last year, amounting to a 0.5 percentage drop. Since 2011, the organization’s active membership across the country has dropped by almost 10 percent.

Alabama and Michigan are the only two states that lost more active union members than Wisconsin in the last year. More than 10,000 members left the Alabama Education Association, a 16 percent drop in membership.

Gov. Scott Walker’s signature law, known as Act 10, allowed Wisconsin’s public employees the freedom to decide whether or not they want to join a union and pay dues. The Right to Work law, passed in early 2015, extended that freedom to all workers.