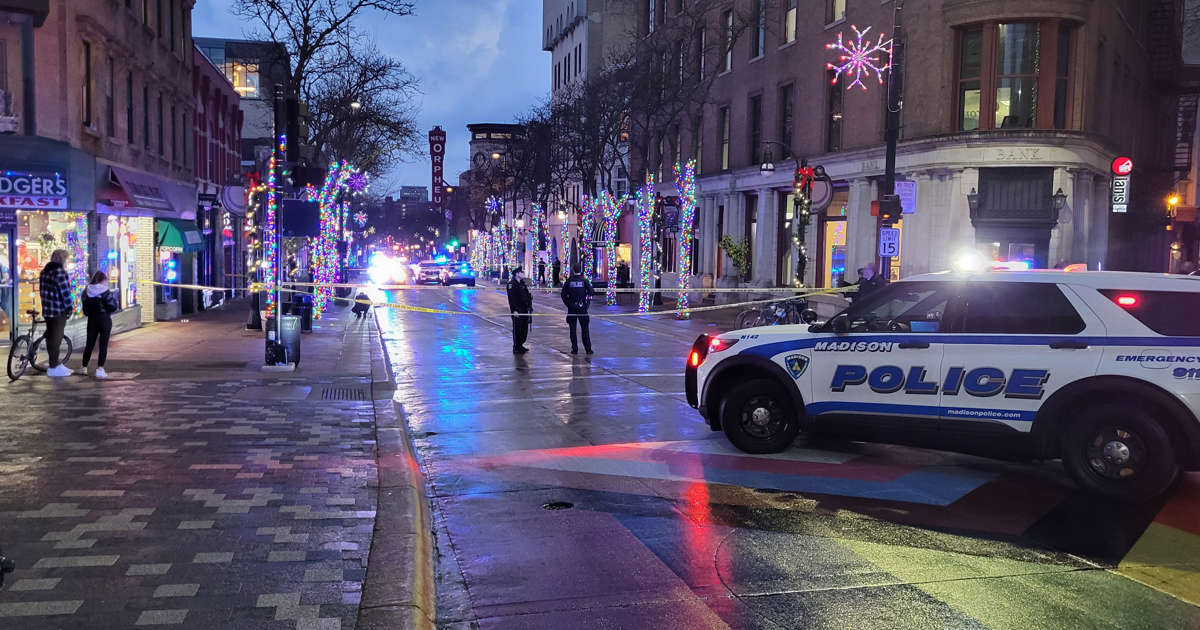 State Street in Madison is beautiful during the holidays.  Lights line the trees along the roadway and traffic signs are draped in holly.  The shops, quirky and inviting all year, seem especially alluring as Christmas approaches; each one could contain that perfect gift.

One could spend hours browsing, walking, stopping for lunch in a café, and just generally enjoying the most bustling street in the most eccentrically vibrant city in Wisconsin…until, of course, gunshots ring out and dump coal on an otherwise perfect afternoon.

Madison Police say a man was shot multiple times in broad daylight on State Street Tuesday afternoon during an altercation with an acquaintance identified as Lamar Jefferson, who is as of this writing still on the loose.

Just a day before Jefferson walked out of the Dane County Jail with a disorderly conduct citation even though he threatened to kill police officers and the man who had punched him earlier in the day on November 22nd.

“We are doing everything possible to keep Madison safe,” Police Chief Shon Barnes said, calling the shooting a “series of unfortunate events.”

That doesn’t even begin to cover it.  Just a day before Jefferson allegedly committed attempted murder and terrorized State Street, he was walking out of the Dane County Jail with a disorderly conduct citation even though he threatened to kill police officers and the man who had punched him earlier in the day on November 22nd.

According to a police report, an agitated Jefferson walked up to a Madison Police squad car in downtown Madison and told officers that he had been punched.  He repeatedly said that he wanted to find and kill the man who did it, eventually becoming so belligerent that he threatened to kill the officers, too.

They arrested Jefferson and recommended a charge of criminal disorderly conduct, a Class B misdemeanor punishable by up to 90 days in jail.  Instead, the Dane County District Attorney’s Office issued a municipal citation for disorderly conduct—which carries no jail time, only a fine—and released Jefferson from custody on Monday.

Less than 24 hours later, he shot someone multiple times during a fight.  Could this have been revenge on the who had punched Jefferson (or a man Jefferson thought had punched him) last week?  It’s not as though it would be out of the question for Jefferson, who has a two-decade-long criminal record that includes multiple violent felonies.

In 2002, when Jefferson was 19 years old, he was charged in Milwaukee County with manufacturing and delivering cocaine and freed on a signature bond.  Less than two months later, he skipped a court-ordered doctor’s appointment for a mental health evaluation.  Over the objections of prosecutors, Milwaukee County Judge Claire Fiorenza allowed Jefferson to remain free ahead of his trial.  Four months later, he again violated the terms of his bond by testing positive for marijuana, but again Fiorenza allowed him to stay out of jail.

Despite Jefferson’s pattern of defiance before he ultimately pleaded no contest and was convicted on the cocaine charge, Fiorenza maintained her pattern of keeping him on the streets by staying his sentence of two years in prison and instead ordered four years of probation.

Within four months, Jefferson violated it with an arrest for possession of cocaine.  Judge Michael Brennan sentenced him to 60 days in jail, but the probation violation meant that Jefferson was sentence to prison for two years.

Once he was released, he immediately returned to his life of crime.  Following a disorderly conduct citation in 2010 and another in 2011, he was convicted of battery, a Class A misdemeanor, in 2012.  Milwaukee County Judge Bonnie Gordon stayed a 150-day jail sentence and instead imposed a year of probation, which Jefferson of course violated within two months.

In 2014, he was convicted as a repeat offender of being a felon in possession of a firearm and sentenced to two-and-a-half years in prison.  According to a criminal complaint, Milwaukee Police officers investigating a shots fired incident approached Jefferson at a bus stop.  He quickly put his hand into his jacket and when officers searched him, they found a handgun.  Jefferson told the officers he was a gang member and thought about firing at them but reconsidered because “he was outnumbered and only had a six-shot revolver with him.”

In 2019, Jefferson was convicted of assault by a prisoner for spitting on a guard who was searching his cell and sentenced to six months in jail.

In spite of all this, Dane County prosecutors insisted on keeping Jefferson out of custody for threatening to kill multiple people, including several police officers, who referred a criminal charge against him.  Because of the District Attorney’s Office’s callous indifference, Jefferson was on State Street Tuesday afternoon instead of in jail, where he obviously belonged.

Now, as the manhunt for him intensifies, the innocent people of Madison terrorized by his brazen shooting are left to again wonder why a violent psychopath was set free by a judicial system that has made such releases its mission.

Lamar Jefferson is and has always been a danger to society and spent 20 years proving it.  He threatened to kill police officers and another man in an incident so unsettling that the officers themselves believed it was criminal.  The Dane County District Attorney’s Office, though, doesn’t believe much unsettling behavior is criminal these days, and it released yet another dangerous man to roam free on State Street.

This pierced the tranquil calm of the heart of the city’s commercial district and very nearly killed a man. When exactly will the innocent people continually victimized by monsters like Lamar Jefferson get their Christmas wish for a restoration of sanity in the Dane County criminal justice system?