There are as many versions of the American Dream as there are Americans willing to dream them. As such, our labor laws should empower the nation’s workers to chart their own course to prosperity, not bind them into restrictive, one-size-fits-all arrangements which reduce their options and limit their potential.

Unfortunately, Washington Democrats are fixated on dragging us back to an outdated model which would strip workers of their freedoms and force every American worker to either join a union or pay dues to a union in order to keep their jobs.

If this sounds like an exaggeration, it’s not. This provision is central to the Democrats’ Protecting the Right to Organize (PRO) Act, which seeks to eliminate the Right-to-Work laws currently on the books in 27 states — including my home state of Georgia.

Given the disruptive effects of the COVID-19 pandemic (and the subsequent growth of the gig economy), it is clear that workers want more flexibility in their work arrangements, not less.

That’s why I’ve teamed up with Sen. Tim Scott (R-S.C.) to introduce the Employee Rights Act. Our legislation defends workers from union intimidation, protects small businesses from harmful regulations, and it preserves the unique arrangements of gig workers, independent contractors, entrepreneurs, and anyone else seeking the flexibility to make their dreams a reality on their own terms.

While the PRO Act only serves the narrow interests of union bosses and their allies in Congress, the Employee Rights Act provides a roadmap for an economy that puts workers first.

You may wonder why Washington Democrats are pushing so hard for this proposal at a time when union membership is dwindling. Truthfully, it has more to do with politics than policy.

Whenever a union employee receives their paycheck, a certain amount is deducted as part of their membership dues. Current labor laws allow union bosses to donate this money to support political candidates and advocacy groups, all without the worker’s approval or knowledge. 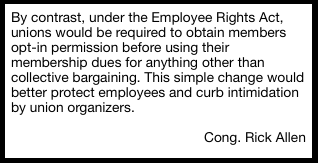 In the last 10 years, unions have donated more than $1 billion of workers’ dues to political campaigns. On average, 88 percent of these funds went to support Democrat candidates, even though roughly 43 percent of union households vote for Republicans.

To the politicians pushing the PRO Act, the calculus is simple: more union members equal more money to pad their campaign coffers — never mind the egregious privacy concerns this raises.

Imagine for a moment that your workplace started collecting money for a company picnic. Those who didn’t want to come to the picnic had no obligation to contribute, but those attending were asked to donate money to help cover the cost. Then imagine you discover the person in charge of that money was using it for their own benefit. Would you still contribute?

Now imagine the company forced you to contribute whether you were going to the picnic or not. If you refused, you could be fired or have your personal information shared with people who would harass and intimidate you until you gave in.

That is the reality that Washington Democrats want to impose on every working American in their PRO Act.

By contrast, under the Employee Rights Act, unions would be required to obtain members’ opt-in permission before using their membership dues for anything other than collective bargaining. This simple change would better protect employees and curb intimidation by union organizers.

The Biden administration has also pursued a radical regulatory agenda which seeks to strip independent contractors of their status, redefining them as traditional employees — a provision pulled straight from the PRO Act. In reality, independent contractors choose that status for a reason. Often, it has to do with the increased flexibility that such an arrangement provides.

Let me be clear: I support Americans who want to join a union. But that’s a decision to be made by them, not for them. Moreover, as this is a personal decision, the Employee Rights Act would protect workers’ privacy by allowing employees the right to decide whether they want their personal information shared with a union during an organizing campaign.

Our workforce is constantly evolving and modernizing to meet the needs of tomorrow. It’s time our labor laws do the same, rather than doubling down on an outdated model which the vast majority of workers have long since abandoned.

The forward-looking provisions contained in the Employee Rights Act will pave the way for our economic recovery by empowering the American worker to choose a career that best suits them.

Rick Allen is a member of Congress representing Georgia’s 12th District in the United States House of Representatives. 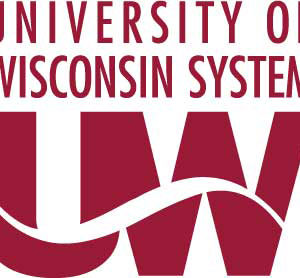