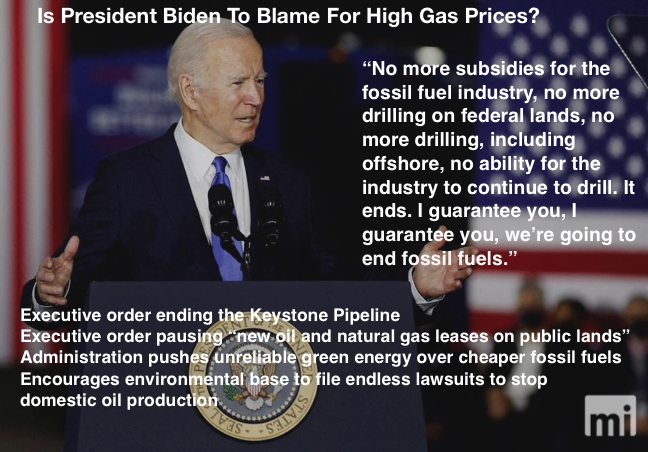 Don’t get me wrong, I’m happy to pay less in taxes any chance I get but this is nothing more than a gimmick to improve the President’s dismal poll numbers. Do you think the President will make transportation do with less spending when he suspends the federal gas tax, or do you think he will keep spending levels the same by adding to our national debt?

If the President was truly concerned about the price of gas, he wouldn’t have followed through on his extreme campaign promises guaranteeing to “end fossil fuels.” Deliberately creating shortages leading to huge price spikes that cut into family budgets and decrease demand is the left’s path to forcing America to so-called clean energy.

Every $70 fill-up is the direct result of Biden’s 5 part plan to move America to renewables:

The problem is…the Biden push to eliminate fossil fuels isn’t ready for prime time.  As was just reported today, Wisconsin will keep our largest coal-fired plants open past their slated closure dates because there simply isn’t the capacity to power the state without them.  Meanwhile we’re seeing warnings about potential blackouts in the state.

So those ‘clean’ electric cars…will be powered by electricity generated by fossil fuels for years to come.

And now he wants to take the price of gas down 18 cents by pausing the federal gas tax collection.  For how long?  And how much will he borrow to keep the federal transportation coffers full? And is $4.80 cent gas a bargain for families who were paying less than half that before he started implementing his agenda?

If the president wants to help American families, he won’t inflict even more economic damage by borrowing to finance a temporary pause in the gas tax.  He’ll promote true energy independence by encouraging domestic drilling. He’ll reverse course on his policies which have directly, deliberately caused this rampant inflation in gas prices, and put the American people above the pipe dreams of radical environmentalists who are pulling the strings in his administration.