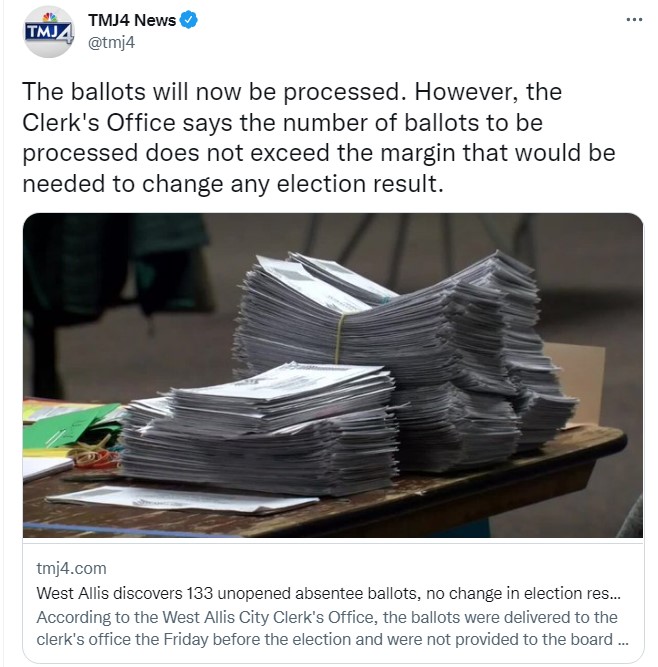 Another Wisconsin election is in the books, and another bin of absentee ballots has been found after the fact.

This time it’s the City of West Allis in Milwaukee County.  Somehow a stash of absentee ballots was forgotten on Election Day, discovered 2 days later, and will be counted.

There are only 133 we’ve been told, and that’s not enough to change the outcome of any race or question on the ballots there.  This is supposed to be reassuring.

Sure, secret stashes of ballots that do change outcomes magically appearing are worse.  Fraud is worse than incompetence.  But trust underpins the system, and as the West Allis clerk perhaps presciently said 3 years ago on Twitter:

It’s becoming harder to forgive the many mistakes of competence, and they are increasingly difficult to differentiate from the mistakes of integrity.

If, in this state where election integrity has been impugned by everyone from Hillary Clinton to Donald Trump, where there can be no clerk unaware of the pressure to execute their job, if here, we can’t manage to track and count the pieces of paper that embody every individual’s stake in democracy, if in a spring election where turnout is less than a third of turnout in a presidential election we are still finding bins of forgotten ballots days after the election, the system is broken.

But that requires rules and people following them. The cities of Milwaukee and Racine are thumbing their noses at a Supreme Court order halting ballot trafficking. The clerks in these cities are accepting ballots dropped off in unlimited quantities from unidentified people, with the apparent backing of the League of Wisconsin Municipalities, which warned them of potential lawsuits if they didn’t blow off the court. As though these cities needed a nudge.

The League also recently put out a video touting clerks – apparently even the ones violating an order from the state’s highest court –  as neighbors we can trust to keep democracy safe.  The League didn’t lift a finger to defend democracy or the Green Bay clerk from a hostile takeover of her role by out-of-state partisans who were neither neighbors nor trustworthy. But there was big money involved so, hey…what’s a little election meddling among friends?

The 133 ballots that sat in a bin for two days before anyone noticed may not impact any outcome, but they prove it’s far too easy for ballots to be tucked away – nefariously or not – and for votes not to be counted.

They were not the only irregularity.  In Sheboygan County, one county board candidate finished the night with 70 fewer votes than the clerk repeatedly reported earlier in the evening. Apparently, a clerical error, these kinds of mistakes can have a profound impact on how voters view election integrity.

And then there’s the question of who won the Milwaukee County Board District 18 seat.  Polls closed 3 days ago, and the Milwaukee County Election Commission can’t say who the winner is because some city wards have not provided counts and might have lost their poll lists.  This race was unusual in that the incumbent didn’t turn in enough signatures to make the ballot, so a number of write-in candidates, including conservative Deana Alexander, were vying for the seat.  All the Commission will say is that 1855 ballots were cast and the two missing city wards would probably show up by Friday.  They’ll for sure know by the 15th.  Definitely, definitely by the 15th.

Is it incompetence, corruption, or just trouble finding people who can count up to 1,800 in a city where the school district successfully teaches math to only 4% of school kids?  It’s anyone’s guess.

Lost ballots, forgotten ballots, found ballots, missing poll books, and changing vote totals are no longer surprising revelations in the days after an election in a state where we have among the highest levels of turnout in the nation. People don’t understand when, and why, it became so hard for one person to cast one vote and have it accurately counted in a timely fashion.

April ballots started being mailed to voters in mid-March and were flowing in and out of clerks’ offices for three weeks, being collected and stored.  In national elections, ballots go out to voters 6 weeks before Election Day so there is well over a month of ballot handling occurring.   On top of the mail traffic, there are two weeks of early in-person voting where voters fill out ballots that are stored by the clerks.

For weeks on end, ballots are being sent and received, then housed in clerks’ offices which have varying levels of security, varying protocols, and varying adherence to election law.

It’s a situation rife with potential for mishaps of both the innocent and sinister kind.

But perhaps more importantly, it’s a situation that fundamentally disequalizes our elections.  In areas where the clerks are not paragons of virtue – like the scofflaws in Green Bay, Racine, and Milwaukee – their refusal to follow the law means unlawfully cast votes are counted in some places, but not in others. Voters in Milwaukee who don’t follow election laws have their votes counted anyway.  Not so for voters in a jurisdiction where the clerk IS the trustworthy sort and DOES care about the law.  These issues are now re-lived and relitigated every election, and with both statutes and court orders actively flouted, there’s no end in sight.

The Wisconsin Elections Commissioners are hopeless, entirely unable to comprehend the law or their responsibilities, completely unwilling to be accountable for their own actions and votes, and wholly derelict in assuring commission staff follow the law and do not advise others to break the law.

This week WEC put the red nose on their clown car by voting unanimously to fine a man for frivolous voter fraud allegations, while blithely ignoring their own complicity in creating the very environment of distrust that generates concerns about fraud about the election process – a process that is Their. Only. Job.

But we’re stuck with them through the fall.  Meanwhile, we’re waiting on a Supreme Court decision on ballot trafficking and drop boxes, a ban of which will likely be ignored by a number of clerks, whose lawbreaking in turn will be ignored by law enforcement.

It’s not clear which ruling a person who cares about fairness in elections should root for.

If they ban drop boxes and trafficking, it will effectively disenfranchise some portion of the electorate in areas where the clerks aren’t scofflaws.  The bad actors have made it clear they will ignore statute and court orders, and the disability rights community is running interference claiming drop boxes and legalized ballot trafficking are required for disabled people to vote, something belied entirely by Wisconsin’s 2016 first-place ranking as the highest-performing state in accommodating voters with disabilities or illnesses – well before the CTCL-funded explosion in these methods.

On the other hand, if the court decides to allow the practices to go forward, the playing field will – in actual practice – be a touch more level.

But the sharp partisan divide on these issues has already set up intra-party battle lines for republicans; one vocal group insists that the party should not use any tools they don’t want to be legal even if it means losing, while another faction rejects the notion of leaving both tools and brains on the table.

It’s more than WEC, or outside money, or corrupt election officials, or incompetent ones. It’s more than mindless vetoes, vague laws, and ignored court orders. We have a system with so many ways to vote, so many weeks of ballot handling and storage, so many opportunities to make honest mistakes, so many openings to commit fraud and so many people not following the laws that something as basic as reliably locating and counting all the ballots is apparently impossible.

These 133 votes are a reminder that fraud isn’t the only thing undermining our election integrity.