The Senate and Assembly Committees on Education held a joint hearing Wednesday on two bills that the authors believe will make education in Wisconsin more transparent and stop the teaching of Critical Race Theory (CRT) in our classrooms.

While parents and lawmakers have recently started to wake up to the threat of CRT in schools, there has been a concerted, organized, and vast campaign to push CRT onto our children for years. The MacIver Institute has been uncovering instances of Critical Race Theory in education since 2014.

Senate Bill 411 (companion bill AB 411) would prohibit classroom teaching and teacher training that promotes the stereotyping of people based on their race or sex. According to the summary of the bill, “concepts that are prohibited from being taught under the bill are the following: that one race or sex is inherently superior to another race or sex and that an individual, by virtue of the individual’s race or sex, bears responsibility for acts committed in the past by other individuals of the same race or sex.“

If a school district is found to be teaching or promoting Critical Race Theory, the State Department of Public Instruction would be required to withhold 10 percent of their state aid. Click here to see the text of the bill and the full summary. 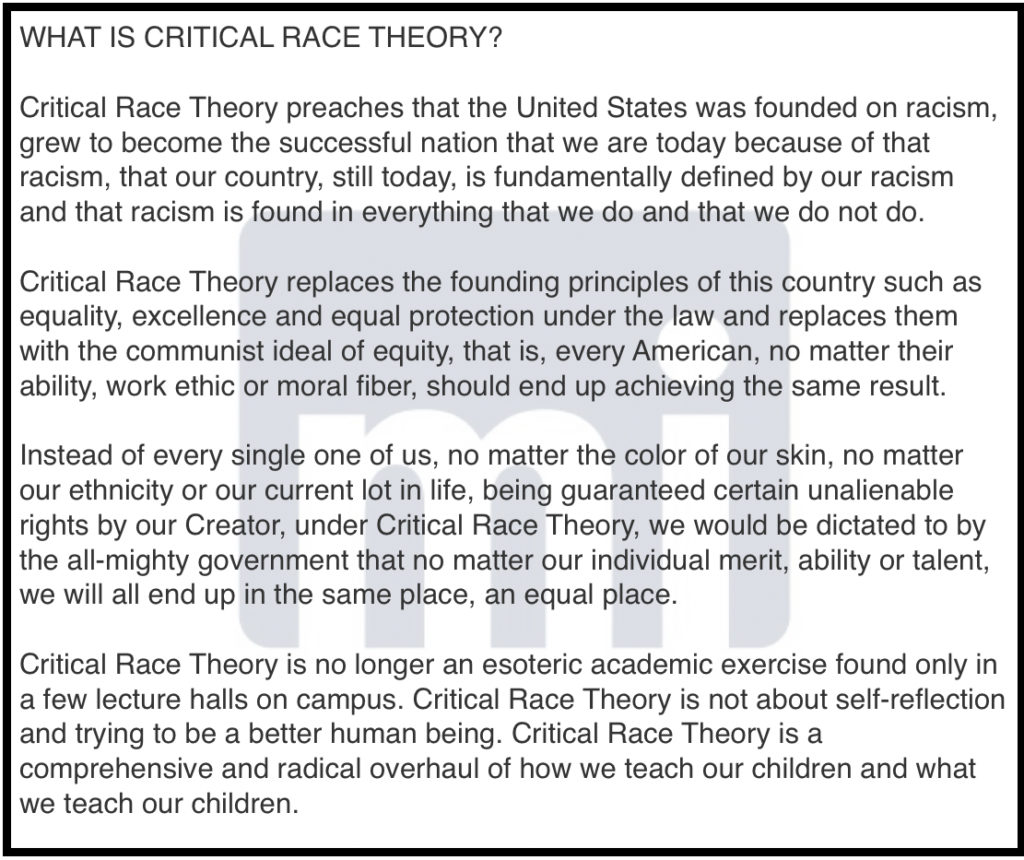 The bill also requires each school board in the state to post all curricula used on the district’s website. A school board must provide a printed copy of any curriculum, at no cost, to anyone who requests it.

The debate about the two sets of bills turned into a debate about Critical Race Theory, what CRT is, and whether it should be permitted in schools. Senator Chris Larson (D – Milwaukee) asked the authors of SB 411/AB 411 what CRT is, saying he hasn’t heard of it being taught in any of our schools. Despite Sen. Larson’s attempt to mislead the public, MacIver has done extensive research and exposed specific instances of CRT infiltrating our classrooms. While educators and administrators no longer use the term Critical Race Theory and instead use one of its many aliases like culturally responsive teaching or equity, CRT is found everywhere in Wisconsin. In fact, we found a specific budget item from MPS, a school district Larson represents, that spends over $500,000 to ensure CRT is in place at all schools (See below).

Rather than have an honest debate about CRT and if CRT should be taught in Wisconsin schools, Sen. Larson, as usual, took the opportunity to belittle and make fun of the opponents of CRT (See below).

Someone please send a clean up crew to the state capitol – the entire right-wing movement is here and having a pants-pee about something they heard on FoxNews: Critical Race Theory.

There are a grand total of ZERO elementary schools teaching it in Wisconsin.

“This bill would allow parents to see what their children are being taught before it is taught in schools. This transparency provides parents with the information they need to engage in productive conversations surrounding the curriculum in their children’s schools.

Our classrooms have become the frontlines of a culture war and parents should have a control over how their kids grow up. We need to be proactive, not defensive, when it comes to deciding how our children are taught. There is a difference between learning about controversial topics and indoctrinating our children.

This bill is a step in the right direction to fix some gaps between our school districts and communities.”

That would be welcomed news for parents like Scarlett Johnson, a mother with children in the Mequon-Thiensville School District, and Alyssa Pollow, a mother living in the Germantown School District. In a MacIver Newsmakers Podcast, Johnson and Pollow talked about the important responsibility school districts have to provide a comprehensive and fair look at history. Listen here.

Rep. LaKeshia Myers (D – Milwaukee) spoke out against SB 411, specifically because she opposes that the bill gives any individual access to school curriculum on-demand, “regardless of [their] academic background or teaching capability.”

Rep. Supreme Moore Omokunde (D – Milwaukee) said that when we talk about racism, he doesn’t want us to think about it as an individual disease people get. He believes that no one can escape racism.

Earlier today, I joined Rep. Behnke to testify on our bill seeking to establish curriculum transparency standards that would allow Wisconsin parents and taxpayers to readily access information on the content being used in public school classrooms, regardless of where they live. pic.twitter.com/W9rbDIFfsl

Also on Wednesday, the Assembly Committee on Government Accountability and Oversight heard testimony on Assembly Bill 414. AB 414 would prohibit local governments from “requiring an employee to attend a training that teaches, advocates, acts upon, or promotes race or sex stereotyping.”

State Rep. Gae Magnafici (R – Dresser), one of AB 414’s authors, testified that her bill will prevent politicization and discrimination at the local government level. Magnafici called CRT “an ideology that claims everything about a person is based on the color of their skin. Not their behavior, not their values, not their environment, but their skin color. This runs antithesis to Martin Luther King Junior’s dream of a nation where children aren’t judged by the color of their skin, but the content of their character.” She continued.

“Slavery and other injustices happened. We need to learn from history, not redefine it. The United States has made leaps and bounds of progress tearing down the backward thoughts of those who judge based on skin color. Theories like Critical Race Theory undo that progress.

To claim that America was founded on racism and that our constitution and way of life should be overthrown is just wrong. Our country was founded on the idea that all people are created equal and all Americans are entitled to life, liberty, and the pursuit of happiness.”

Madison’s Civil Rights Director Norman Davis testified before committee that local governments should not be told how to train their employees, and so they should not be prevented from teaching about CRT or systemic racism. Davis said employees need to know that systemic racism exists and that racism forms almost every life outcome in the United States. He said that AB 414 should be tossed because it blocks local governments from opening “the door of understanding” that our country’s systems have origins in racism.

MacIver has been writing about some of Dane County’s radical radicalized training for years. Between 2011 and 2016 alone, Dane County spent $1.5 million to address racial disparities in the criminal justice system. One attendee was disappointed that the training pushed the idea that “all white people are stereotypical racists.” Another pointed out “I have a desk full of work that as a taxpayer I am not impressed with everyone sitting on their butts and not doing any work today.”

Neither committee held an executive session or vote on the bills. Stay tuned to MacIverInstitute.com and @MacIverWISC on twitter for the latest update on these bills and the push to force Critical Race Theory into our classrooms.