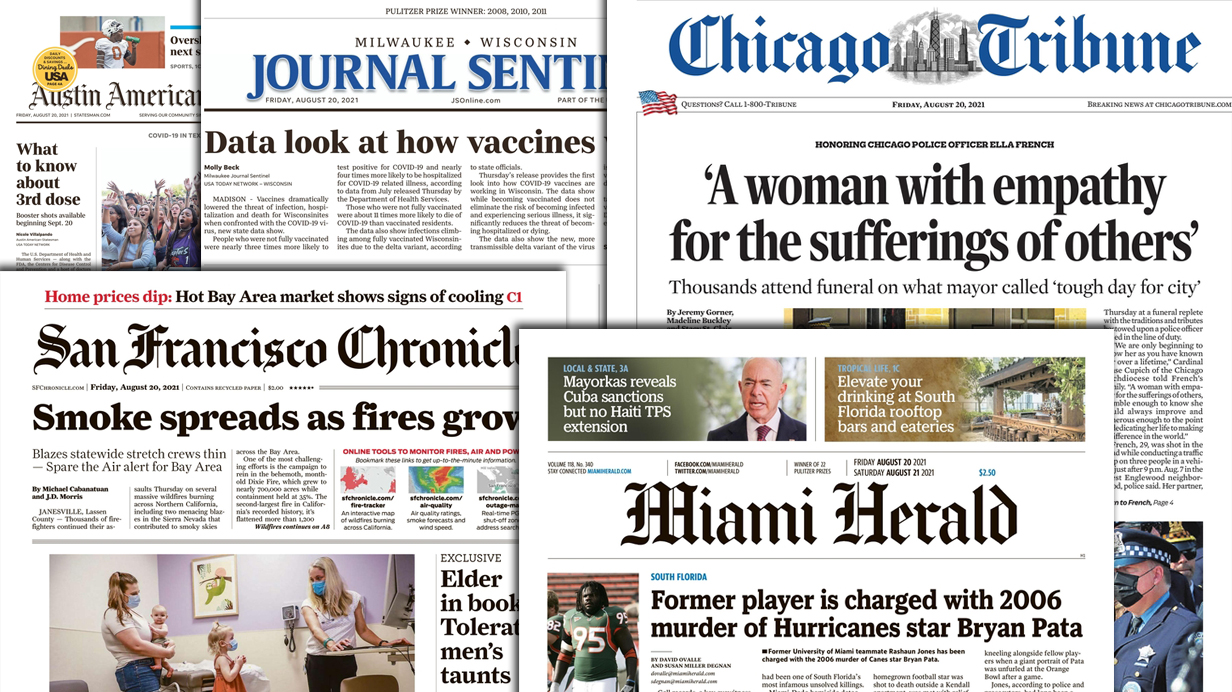 Dan O’Donnell on how the media starting to drop the disaster in Afghanistan from the front page is a damning indictment of its partisan hackery.

The Biden Administration’s abysmal failure to adequately plan for and head off this week’s catastrophe in Kabul has of course dominated headlines this week, but will it for much longer?

New York Times chief political correspondent Peter Baker tweeted Thursday that “the Biden team’s cold political calculation is that Americans won’t care what happens in Afghanistan as long as Americans are safe. To their point, today there are no front-page stories on Afghanistan in cities like Boston, Austin, Chicago, Atlanta, Indianapolis, Fresno or Miami.”

Add Milwaukee to that list, Thursday’s edition of The Milwaukee Journal Sentinel did not include a single front page story about the ongoing disaster in Afghanistan…even though thousands of Afghan refugees will be shipped to Fort McCoy in western Wisconsin.

It is hard to believe that this is an accident.  Kabul falling to the Taliban in such spectacularly inept fashion after months of assurances from the Biden Administration that this was impossible is one of the biggest stories of the decade—especially coming just weeks before the 20th anniversary of the 9/11 attacks.

A press that is not interested in covering it past its fourth day is a press that has revealed itself to be nothing more than a partisan apparatchik willing to do anything to serve the interests of its chosen side.

During an interview with ABC’s George Stephanopolous (the former communications director for the Clinton White House) President Biden himself intimated that the media should stop covering the horrors in Kabul because it’s old news.

“We’ve all seen the pictures,” Stephanopolous told him.  “We’ve seen those hundreds of people packed into a C-17. You’ve seen Afghans falling…”

“That was four days ago, five days ago,” Biden interjected.

It was actually two days before the interview, but who’s counting? Biden’s point was clear enough: Stephanopolous, a card-carrying member of Biden’s Democratic Party, needed to stop covering the disaster of Biden’s own making immediately.  It happened, like, nearly a week ago! It’s time to move back to a friendly narrative now.

“That was four days ago, five days ago” – Joe Biden

In a desperate effort at achieving this, Biden on Wednesday held a press conference advocating COVID-19 vaccine boosters but refused to take a single question on Afghanistan, physically turning his back on the press as he metaphorically turned his back on the Americans still stranded there.

Never mind that, though: There are anti-vaxxers to shame! And wouldn’t the media rather get back to shaming the presumably conservative anti-vaxxers driving the latest COVID surge than shaming the Biden Administration for utterly failing to protect American citizens in Afghanistan.

Baker is right: This is a cold calculation by Biden’s team, and it is likely to succeed. But not because the American people don’t care about the disaster in Kabul; because the media is perfectly willing to help Biden weather the worst storm of his political career.

The fact that newspaper front pages are already bereft of Afghanistan coverage speaks volumes about the lengths said papers will go to protect Biden from the political fallout of the worst foreign policy move in a generation.  They don’t want to cover it just as much as Biden doesn’t want it covered.

This is a damning indictment of the American news media; far less the courageous beacon of truth-telling it pretends to be than the sycophantic propaganda machine it has allowed itself to become.

The editors of the newspapers and executive producers of news shows that are starting to bury Biden’s Afghan catastrophe know full well what they’re doing, and one would like to think they still have either a conscience or modicum of news judgment left to understand how wrong it is.

This is an American tragedy, and Americans need to know about it, no matter whose political ally is responsible.