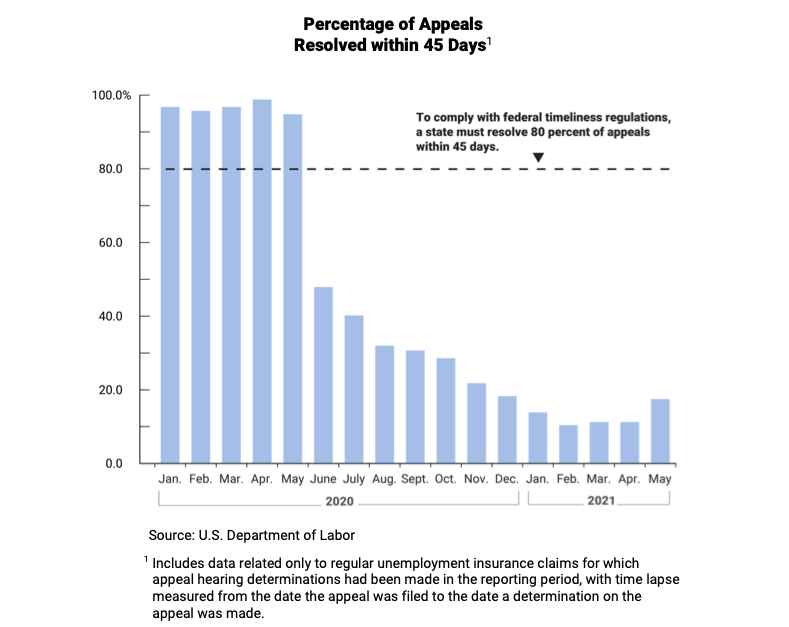 17.5% Of Unemployment Insurance Appeals Requests Were Decided Within 45 Days, As Required By The Federal Government

14,500 Appeals Are Still Waiting For A Decision

The Legislative Audit Bureau (LAB) released a report last week revealing that the Wisconsin Department of Workforce Development (DWD) is still mismanaging the state’s unemployment insurance (UI) program and they’re failing to meet the federally required deadline for making decisions on most of their appeals cases.

“We found that DWD did not comply with federal regulations to issue appeal decisions in a timely manner from June 2020 through May 2021,” LAB wrote. The federal government requires that at least 80% of states’ appeal decisions be made within 45 days of receiving the appeals requests. LAB found that only 17.5% of DWD’s appeals decisions made in May 2021 were made within 45 days of receiving the requests.

DWD’s mismanagement of the UI program was evident from the beginning of the COVID-19 pandemic in Wisconsin. In March of 2020, DWD had 57 employees at its unemployment call center, and the phone system could handle 450 calls at a time. On March 26th, when Governor Evers’ Safer at Home lockdown began, DWD was getting 160 attempted calls a second, over half a million an hour. To address the massive increase in calls, DWD transferred only 75 of its 1,606 full time employees to the call center. DWD didn’t increase their call center staff again until two months later. In May of 2020, DWD finally hired two vendors to run additional call centers, which added 500 call center staff by July.

LAB reported in December of 2020 that, between March 15, 2020 and June 30, 2020, a mere 0.5% of 41.1 million phone calls could get through to the DWD call center. The other 99.5% of calls were blocked, received busy signals, or were abandoned by the caller. On top of that, hundreds of thousands of outstanding UI claims were not being paid out at the time.

Six months into the crisis, Governor Evers fired the then secretary of DWD, Caleb Frostman. Based on last week’s LAB audit, firing Frostman clearly did not solve DWD’s problems.

“This is just the latest in a long line of failures at Governor Evers’ Department of Workforce Development,” Senator Alberta Darling (R-River Hills) wrote about last week’s audit. The Senator wrote that, “In multiple instances, DWD disbursed funds to claimants but doubled back months later to inform them that they had been overpaid and suddenly owed thousands. With minimal explanation, DWD mailed threats to issue warrants and threatened to place a lien on claimants’ property in order to recover the alleged overpayment from earlier that year. DWD completely ignored the claimants when they tried to ask questions, both before and after the warrant threat was sent.”

The appeals process is a manual process, not virtual. Throughout the pandemic, DWD has pointed to their outdated automated UI system to explain why their UI management was so terribly slow. This audit suggests, however, that a large part of UI delays have been caused by human error, as another DWD audit has suggested.

“DWD indicated it has taken steps to increase staffing assigned to the appeal hearing processes,” LAB wrote. However, “We found that the majority of staffing changes have occurred since December 2020,” over 9 months after the UI crisis began in Wisconsin. According to LAB, DWD says between December 2020 to March 2021, they hired 33 new administrative law judges to administer appeal hearings, and hired 26 new appeals support staff.

“DWD didn’t ramp up hiring administrative law judges or appeals support staff until December,” writes Representative Samantha Kerkman (R-Salem Lakes). “They couldn’t have predicted the pandemic and the tsunami of initial claims, but knowing the enormous peaks at other points throughout the claims process – jammed phone lines, mountains of claims requiring an initial determination – they should have been able to predict the huge swell in appeals that was looming and could have acted much earlier to minimize the impact on workers who were anxiously awaiting their appeals and desperately hopeful to receive UI payments.”

LAB’s revelation came from a report on the state’s Fraud, Waste, and Mismanagement Hotline, a telephone and online hotline where people can anonymously report instances of government mismanagement.

“For over a year, multiple Evers appointees have disastrously botched the delivery of relief when people needed it most,” wrote Senate Majority Leader Devin LeMahieu (R-Oostburg).

“Our neighboring states were able [to] help struggling residents in their time of need,” Sen. LeMahieu wrote. “Both Illinois and Minnesota issued timely appeals decisions in over 70% of cases. Wisconsin DWD’s 17.5% compliance is an embarrassment, and worse, has harmed people struggling to deal with the negative effects of government shutdowns.”

The report adds to a mounting list of evidence of DWD’s improper administration of the state unemployment program throughout the COVID-19 pandemic. As Senator Robert Cowles (R- Green Bay) writes, “In July 2020, LAB reported that DWD overpaid UI claimants by $21.2 million. In September 2020, it was reported that DWD had only answered 0.5% of calls made to their call centers. In December 2020, it was reported that DWD was responsible for 11 weeks of delay, on average, to resolve an individual’s initial claim when additional information was needed. Today, LAB reported that DWD has been in noncompliance with federal regulations to issue UI appeal decisions in a timely manner since June of 2020. That’s 13 months of missing the mark.”