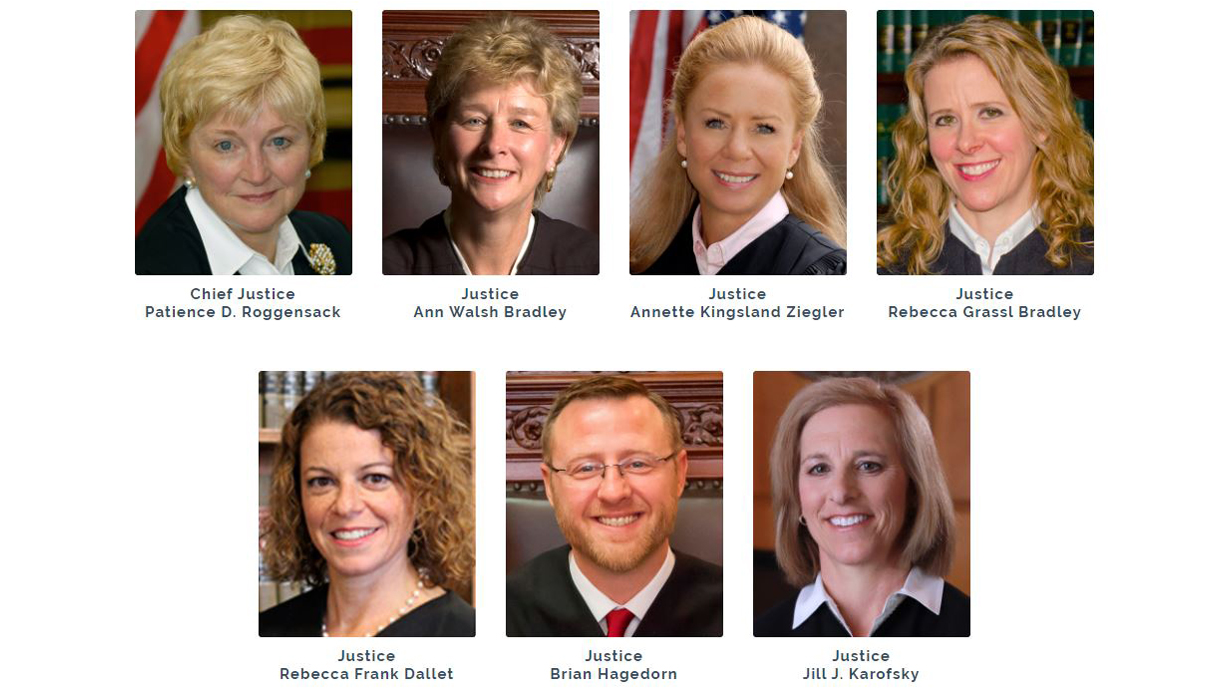 “The question in this case is not whether the Governor acted wisely; it is whether he acted lawfully. We conclude he did not” – Justice Brian Hagedorn

“While a pandemic will not follow the laws of men, the Governor must” – Justice Rebecca Bradley

The Wisconsin Supreme Court ruled 4-3 that Governor Evers exceeded his authority by declaring multiple additional states of emergency after the first one expired.

The State Supreme Court confirmed what is written in state statute that the Governor can only declare one 60-day state of emergency for a single public health occurrence unless the legislature passes a joint resolution to extend it. Evers declared states of emergency in March, July, September, November, January, and February in response to COVID-19.

Governor Evers claimed that his multiple emergency orders were for different emergencies, but the court ruled they all applied to the same emergency, COVID-19. As far as the law was concerned, the orders were essentially all the same.

“The question in this case is not whether the Governor acted wisely; it is whether he acted lawfully. We conclude he did not,” Justice Brian Hagedorn wrote in the majority opinion. “Pursuant to this straightforward statutory language, the governor may not deploy his emergency powers by issuing new states of emergency for the same statutory occurrence.”

Evers acted under the belief that changing some of the language in his endless emergency orders would allow him to keep issuing back-to-back states of emergency. But Justice Hagedorn wrote in his opinion that, “Statutory restrictions on executive power cannot be avoided by modest updates to the “whereas” clauses of an emergency declaration.”

Justice Hagedorn further wrote, “At the outset, we must remember that our constitutional structure does not contemplate unilateral rule by executive decree. It consists of policy choices enacted into law by the legislature and carried out by the executive branch.”

After the Supreme Court released their decision, Jére Fabick, who filed the lawsuit against Governor Evers, stated,  “A Governor is simply not permitted to continue declaring a state of emergency without legislative approval. This case ensures that future Governors— regardless of party and regardless of the reason—must comply with the limits conferred on them by the emergency powers statute and must seek approval from the Legislature to extend a state of emergency declaration.”

Justice Ann Walsh Bradley, who wrote the dissenting opinion, made clear that she didn’t care about the legal question of this case. Rather, she cared more about the results of the decision by the Court. “This is no run-of-the-mill case. We are in the midst of a worldwide pandemic that so far has claimed the lives of over a half million people in this country,” she wrote. “Unfortunately, the ultimate consequence of the majority’s decision is that it places yet another roadblock to an effective governmental response to COVID-19, further jeopardizing the health and lives of the people of Wisconsin.”

“At the outset, we must remember that our constitutional structure does not contemplate unilateral rule by executive decree. It consists of policy choices enacted into law by the legislature and carried out by the executive branch.”

On the contrary, Justice Hagedorn wrote, “The dissent … spends considerable space discussing outcome-focused concerns. But our role is not to rule in favor of outcomes we like; it is to interpret and apply the law, whether we like it or not.”

Justice Rebecca Bradley concurred with Hagedorn, writing, “Evers declared a state of emergency on March 12, 2020. The legislature never extended it. Accordingly, any orders issued by the Governor more than 60 days thereafter are unlawful and void. While a pandemic will not follow the laws of men, the Governor must.”

“Proposals to reinvigorate the nondelegation doctrine are often met with warnings about the adverse impact on the government’s ability to operate efficiently,” Rebecca Bradley wrote. Many in favor of the Governor’s year of endless emergency orders have argued that this is necessary for the government to effectively and quickly respond to COVID-19. Justice Rebecca Bradley, however, asserts in her opinion that, “Governmental efficiency can never be allowed to trump the people’s liberty.”

The Wisconsin Supreme Court has made previous rulings on Governor Evers’ emergency powers. Notably, the Court issued a May 2020 ruling against then-Department of Health Services Secretary Designee Andrea Palm, which ended Wisconsin’s Safer at Home statewide lockdown. The Supreme Court’s COVID-19 decisions have been criticized by some as partisan, but Justice Rebecca Bradley addressed this in her concurrence: “Although conflict between Governor Evers and the legislature over the State’s COVID-19 pandemic response is often presented as partisan in nature, this court’s review is not. This court does not referee partisan battles; our duty is to ensure that each branch of government respects the constitutional limits of its authority.” 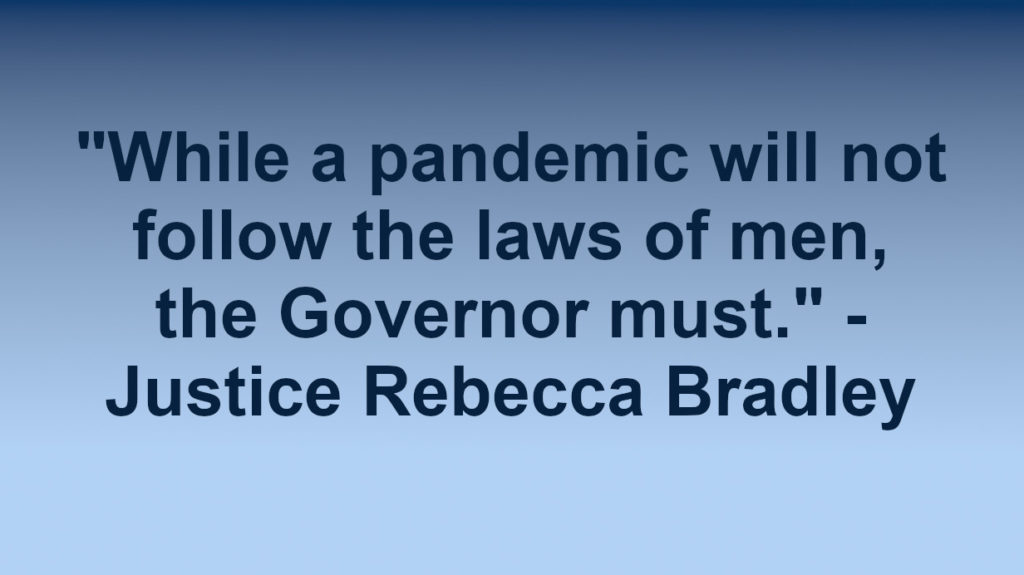 In addition, Rebecca Bradley referenced back to Governor Evers’ November respondent’s brief to this case. Evers’ team wrote that it “may very well implicate separation of powers problems” if he were to declare another public health emergency right after the legislature revoked one. At the time, Evers dismissed that kind of scenario as “rank speculation.” In February 2021, Evers issued a new state of emergency declaration immediately after the legislature ended the one previous.

Following the Supreme Court’s decision, Governor Evers issued a statement saying, “Since the beginning of this pandemic, I’ve worked to keep Wisconsinites healthy and safe, and I’ve trusted the science and public health experts to guide our decision making. Our fight against COVID-19 isn’t over—while we work to get folks vaccinated as quickly as we can, we know wearing a mask saves lives, and we still need Wisconsinites to mask up so we can beat this virus and bounce back from this pandemic.”

“The dissent … spends considerable space discussing outcome-focused concerns. But our role is not to rule in favor of outcomes we like; it is to interpret and apply the law, whether we like it or not.”

After the Supreme Court issued their decision, Jére Fabick, who filed the suit against Evers, wrote, “Today’s decision by the Wisconsin Supreme Court was a victory for the rule of law and the separation of powers. This case was never about partisan politics or masks. Instead, this challenge was brought to ensure that the Governor exercise his emergency powers lawfully, something of interest to all citizens of Wisconsin.”

Members of the Wisconsin State Legislature also weighed in on the decision.

Assembly Speaker Robin Vos (R- Rochester) said, “The Wisconsin Supreme Court confirmed what we already knew. Governor Evers exceeded his authority by issuing multiple emergency orders without consulting the legislature. People and businesses are free to make decisions based on what’s best for them and don’t need state government telling them how to live their lives.”

“I applaud the Court for ending this constitutional crisis in our state,” said Senate Majority Leader Devin LeMahieu (R- Oostburg). “Today’s ruling vindicates the Legislature as a co-equal branch of government and will expand freedom and opportunity for the people of Wisconsin.”

On the other hand, Assembly Minority Leader Gordon Hintz (D- Oshkosh) said, “I am deeply disappointed in today’s decision by conservatives on the Wisconsin Supreme Court. They got it 100% backwards today. The majority’s decision pretends that a pandemic is unchanging and ignores the devastating human impact of COVID-19.”

“Today’s decision from the Wisconsin Supreme Court is a win for the rights of the people of Wisconsin,” Senate President Chris Kapenga (R- Delafield) said. “Governor Evers abused his power to repeatedly declare emergencies. His unwillingness to follow the law threw our state into a constitutional crisis. This decision reinforces that one person cannot wield unchecked power over the people of Wisconsin indefinitely.”

Representative Lisa Subek (D- Madison) said, “I am disappointed by today’s decision by conservatives on our state Supreme Court that strikes down our current public health order and ties the hands of the administration to issue subsequent orders. Today’s ruling ignores changing health conditions and circumstances during a pandemic, and it drastically limits the ability of state health officials to respond and act to protect the health and safety of our communities.”

Representative John Macco (R- Ledgeview) said, “This is not about the efficacy of masks, it has always been about executive overreach. We live in a representative republic where every branch has a seat at the table. For the Governor to attempt to completely cut out the people’s elected body is unconscionable. My colleagues and I remain ready to work with Governor Evers and it is my hope that the Governor is finally ready to work with us.”

It’s unclear what the Evers Administration’s next move will be. There are at least three options that may be at the Governor’s disposal: try to issue a new emergency order that works around the Supreme Court’s ruling, work with the legislature to get their approval for a new plan, or encourage local governments and public health officials to institute their own COVID-19 mandates.

Immediately after the State Supreme Court issued their ruling, the Community Affairs Committee of Wauwatosa recommended the Common Council vote to extend the city’s mask mandate through June 16, 2021. Paul Farrow, the Waukesha County Executive said that the county will not issue their own mask mandate.

DHS Deputy Secretary Julie Willems Van Dijk also released a statement after the Supreme Court ruling, saying, “We will continue to follow the science in our statewide response, and we’re asking you to do the same by doing everything in your power to support the adoption or continuation of mask orders in your jurisdiction.”

MacIver will continue to provide updates as we learn more.