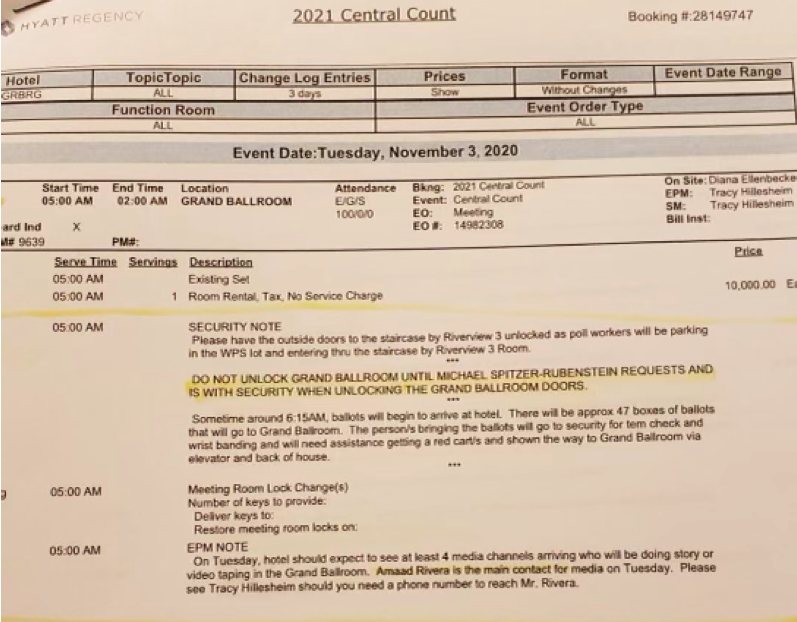 Just how lawless was the City of Green Bay’s handling of November’s presidential election?  It clearly violated at least five state statutes, and Mayor Eric Genrich may have personally committed felony misconduct in public office.

Emails obtained by the Wisconsin Assembly’s Committee on Campaigns and Elections and presented during a hearing Wednesday demonstrate that Genrich usurped the lawful authority of Green Bay City Clerk Kris Teske to run the election, thereby running afoul of Wisconsin Statute § 7.15(1)’s requirement that “each municipal clerk has charge and supervision of elections and registration in the municipality.”

Teske did not.  Genrich used $1.6 million in grant money from Facebook founder Mark Zuckerberg’s Center for Tech and Civic Life to essentially replace Teske with Michael Spitzer-Rubenstein, the Wisconsin lead for the liberal National Vote at Home Institute.

“I am being left out of the discussions and not listened to at the meetings,” a frustrated Teske wrote on July 9th as Genrich made it clear that he and what he referred to as “the grant team” were now overseeing election preparations, not her.

“I just don’t know where the Clerk’s Office fits in anymore,” she added in another email the same day.

Her frustrations would only grow over the next month.

“I am very frustrated, along with the Clerk’s Office,” she wrote on August 28th.  “I don’t know what to do anymore.  I am trying to explain the process, but it isn’t heard.  I don’t feel I can talk to the Mayor….I don’t understand how people who don’t have the knowledge of the process can tell us how to manage the election.”

On October 7th, Spitzer-Rubenstein offered to “help with curing absentee ballots that are missing a signature or witness signature address.”  Teske declined, but Genrich’s Chief of Staff, Celestine Jeffreys, stepped in to let her know that the “grant mentors would like to meet with you to discuss, further, the ballot curing process. Please let them know when you’re available.”

Under Wis. Stat. § 6.87(9), “if a municipal clerk receives an absentee ballot with an improperly completed certificate or with no certificate, the clerk may return the ballot to the elector, inside the sealed envelope when an envelope is received, together with a new envelope if necessary, whenever time permits the elector to correct the defect and return the ballot.”

For years, the Wisconsin Elections Commission has been ignoring this law and allowing clerks to cure ballots themselves, but it is patently unlawful for anyone outside of municipal government to do so.

Brown County Clerk Sandy Juno was so alarmed by what was going on in Green Bay that she contacted the Wisconsin Elections Commission.

“In reviewing many of the emails received through open records request and shared with me, it’s apparent that the election duties and responsibilities of the municipal clerk were thwarted by the Mayor’s office during the 2020 election cycle,” she said in written testimony released Wednesday.  “An appointed municipal clerk doesn’t have the same independence and freedom in running elections as that of an elected official.  The City of Green Bay Mayor’s Office demonstrates how to effectively remove the city clerk from election responsibilities and confiscate the clerk duties protected under Wisconsin election laws.”

Teske was so frustrated that she decided to take FMLA leave just days before the election and eventually left her position a few months later.

“I want you to be aware about the Clerk Staff that stated if they had the money, they would walk out the door now, another said I don’t want to work here anymore, and the third is actively looking for a new job,” Teske wrote in an email October 22nd.   “All because the Mayors staff…is bossing the Clerk Staff around. They call me crying or say they went home crying.”

After she left her position, Genrich and Spitzer-Rubenstein totally took over the last-minute preparations for Election Day voting.

Spitzer-Rubenstein—who was not Green Bay’s clerk and not employed by the city at all—had unfettered access to thousands of absentee ballots before they were cast.

“Are the ballots going to be in trays/boxes within the bin?” Spitzer-Rubenstein asked Genrich and several other people in an email November 1st.  “I’m at KI [Convention Center at the Hyatt Regency Hotel, which served as Green Bay’s Central Count site] now, trying to figure out whether we’ll need to move the bins around throughout the day or if we can just stick them along the wall and use trays or something similar to move the ballots between stations.”

This meant that Spitzer-Rubenstein—who was not Green Bay’s clerk and not employed by the city at all—had unfettered access to thousands of absentee ballots before they were cast.

On Election Day, multiple election observers witnessed him giving orders to poll workers and presenting himself as running the show—and he did so unlawfully.

“First of all there was no consistency how the various tables were processing absentee ballots,” Juno testified.   “Opened ballots were face up exposing votes, and poll workers were observed reviewing how the ballots were marked.”

This constitutes election fraud under Wis. Stat. § 12.13 (2)(b), which provides that “no election official may “observe how an elector has marked a ballot unless the official is requested to assist the elector” or “intentionally permit anyone not authorized to assist in the marking of a ballot to observe how a person is voting or has voted.”  Doing so is a Class I felony punishable by up to 3½ years in prison.

To shield all of this from election observers, Genrich and Spitzer-Rubenstein likely violated state law in shutting them out altogether.

“Election observers were located far away from poll workers, so they were no opportunity to see or hear the absentee ballot process,” Juno said Wednesday.  “Green Bay provided access to the central count location but prevented observers from participating in the observation process.

“The physical location where they were placed does not meet state statutes. This was in direct violation of election laws.  Observers had no opportunity to hear absentee electors’ names, observe within legal distance to see ballots being processed, rejected or remade, or challenge questionable electors’ ballots.”

This, according to Brown County’s clerk (who has since retired), did not happen and, truthfully, one would not expect it to.  So lawless was Green Bay’s election that it would have been a surprise if officials let observers anywhere near the counting of votes.

If Green Bay’s clerk wasn’t even allowed near the city’s election, what chance did observers have?

Genrich himself bears the ultimate responsibility for this lawless debacle, and it very well included him personally committing a felony.  When he essentially replaced Teske with himself and delegated some of her duties to Spitzer-Rubenstein, Genrich may have committed misconduct in public office, which is defined by Wis. Stat. § 946.12(2) as performing an act “which the officer or employee knows is in excess of the officer’s or employee’s lawful authority.”

If he did so to in order to help a preferred candidate or candidates, he very well may have violated Wis. Stat. §946.12(3), which prohibits the exercise of “a discretionary power in a manner inconsistent with the duties of the officer’s or employee’s office or employment or the rights of others and with intent to obtain a dishonest advantage for the officer or employee or another.”

Misconduct in office is a Class I felony punishable by up to 3½ years in prison.  That’s how deadly serious this sort of unlawful usurpation of a duly appointed city clerk’s role is.  Genrich had no legal authority to run Green Bay’s election, yet he did so anyway.  He had no legal authority to replace Teske with Spitzer-Rubenstein, yet he did so anyway.

As a result, both his city and the rest of the state are left to wonder whether the presidential election in Wisconsin was conducted fairly, because in Green Bay it sure wasn’t conducted lawfully.