By vetoing AB 1, Evers also vetoed an extension of the state suspension of the usual one-week waiting period for unemployment insurance payouts. The Federal Government requires a state to suspend their one-week waiting periods in order to receive a federal boost in UI funds. When Governor Evers vetoed the bill, he vetoed an extra $1.3 million per week for Wisconsinites out of work from COVID-19. In total, Governor Evers’ veto will cost Wisconsin’s unemployed $6.5 million by the time the federal boost is set to expire in mid-March.

AB 1 included one provision that would require the Department of Workforce Development (DWD) to address their backlog of unemployment claims within the 30 days after the bill is passed. Additionally, DWD would be required to extend their call center hours to 12 hours a day, 7 days a week until claims processing is again “at levels comparable to those in January and February 2020,” according to the Wisconsin Legislative Reference Bureau.

By vetoing AB 1, Evers conveniently let DWD continue business as usual, without a plan of accountability to the tens of thousands of people still waiting in their UI backlogs.

AB 1 also included a provision that required nursing homes to allow at least one “essential visitor” per resident to visit the resident and provide support during COVID-19. Evers’ veto eliminates the essential visitor policy. 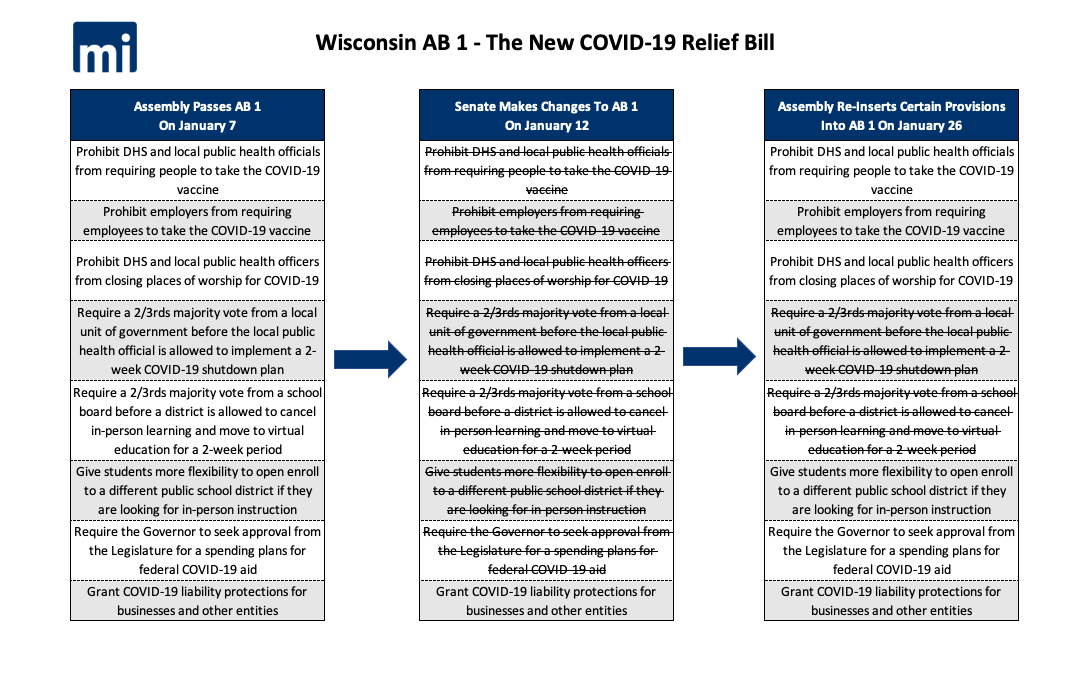 Finally, with a recent amendment to AB 1, the bill would have restricted Governor Evers from using his normal emergency powers if he declares another COVID-19 state of emergency. If the bill had been passed, Evers could only declare another COVID-19 public health emergency in order to receive federal aid. The only emergency power he would retain is to deploy the Wisconsin National Guard for virus response.

Evers announced his veto just minutes after the Senate had passed the bill.

“We had a bill that Republicans and Democrats supported–and one that I said I would sign if it was sent to my desk–that passed the Senate on a bipartisan vote,” Evers said, referring to the bill that he and Senate Majority Leader Devin LeMahieu negotiated last month, SSA 1. “Unfortunately, Republicans once again chose to put politics before people, abandoned that compromise, and passed a bill they knew I wouldn’t sign.”

Now, Evers demands the “compromise bill,” SSA 1, be sent to his desk. SSA 1 does not have the liberty protections listed above, except for the COVID-19 liability protections for businesses.

SSA 1 is also missing language that would restrict Governor Evers’ powers during another declared state of emergency for COVID-19.

In a joint statement on Evers’ veto, Assembly Speaker Robin Vos (R-Rochester) and Senate Majority leader Devin LeMahieu (R-Oostburg) said “It appears Governor Evers cares more about his own power than the people of Wisconsin. The legislature passed a Coronavirus Relief Bill that provides the state more than $100 million to fight the virus and ensures that Wisconsinites have access to necessary medications, vaccines and COVID-19 tests. Instead, the governor wants to keep the door open to closing places of worship. He wants full discretion over federal COVID funds without the people of Wisconsin having a voice through their elected representatives. He wants employers to force their workers to be vaccinated as a condition of their employment.”

The legislators also said, “According to the Legislative Fiscal Bureau, the state will now no longer be eligible to capture $6.5 million in federal enhanced Unemployment Insurance benefits. After months of poor management and a massive claims backlog at the Department of Workforce Development that left so many people struggling without benefits, it shows another oversight within the Evers administration.”

In his reaction, Senator Van Wanggaard (R-Racine) said “Governor Evers has once again decided – unilaterally – that he alone knows what’s best for Wisconsin. His veto today means that a good many of the 106,000 unemployed workers in Wisconsin will lose their federal benefits on Monday. He has knowingly jeopardized $49 million a month in SNAP benefits. He vetoed $100 million for testing, PPE and vaccines.”

“He is requiring seniors on SeniorCare to pay for the COVID vaccine, if his administration can ever get it to seniors,” Sen. Wanggaard said. “He is allowing every other citizen to have to pay for their vaccine, if his administration ever gets vaccines for the general public out the door. He vetoed allowing ONE loved one to visit a person in a nursing home. He vetoed the extension of over a dozen items that he signed into law 9 months ago. And why? In his veto message he only mentioned two specific items: He wants employers to be able to force employees to take the vaccine, and he wants state and local health officials to be able to close churches.”

The resolution is based on Wisconsin statute that says the Governor cannot declare more than one 60-day state of emergency for the same issue without legislative approval. The resolution said that Governor Evers’ first 60-day emergency declaration expired on May 11, 2020 and that any new COVID-19 emergency declarations after that were illegal because the Governor did not ask the Legislature for permission. If the resolution passed, it would require Governor Evers to work with the legislature to pass rules and laws that would contribute to the state COVID-19 response.

Evers negated SJR 3’s attempt to make him follow the law and work together with the legislature. By issuing another emergency declaration for COVID-19, many believe he thumbed his nose at the legislature, at Wisconsin law, and at the Wisconsin State Constitution.

“Tony Evers is now an openly lawless governor clearly in violation of his oath of office and his duty to comply with the rule of law,” said Senator Steve Nass (R-Whitewater). “Tony Evers now acts no differently than a dictator in control of a banana republic.”

Nass also said, “I will be immediately drafting another senate joint resolution to end the Evers Emergency Declaration issued on February 4, 2021. I will also be calling on senate leadership to consider filing for an emergency action in the Wisconsin Supreme Court.”

“I’m glad Governor Evers acted quickly to reinstate a statewide mask order, but I hope my colleagues will come to their senses and act in good faith to combat this pandemic instead of playing politics with public health,” said Representative Greta Neubauer (D-Racine).

“Governor Evers continued to show flagrant disregard for the rule of law by issuing yet another illegal statewide mandate,” said Senate Majority Leader Devin LeMahieu (R-Oostburg). “Now that the Legislature has affirmatively exercised our authority under Chapter 323 to revoke the overreach of executive emergency powers, we urge the Supreme Court of Wisconsin to end this constitutional crisis.”

LeMahieu continued, “The People of Wisconsin can no longer be subjected to confusing, unilateral decrees without basis in statute. We must reinstate the rule of law, uphold separation of powers, and restore confidence in our system of government. The Legislature has done our part to stop this lawlessness. Only a court can stop a Governor bent on ignoring the law.”

MacIver will continue to provide the latest updates to this story as we learn more.