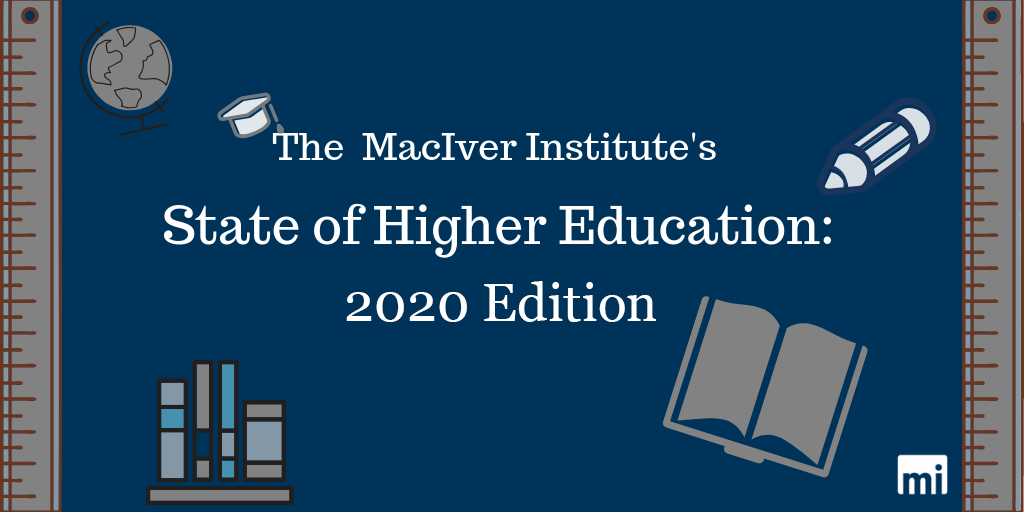 The leaves are turning, the students are (somewhat) back to campus, and the days are getting shorter—that means it’s time for the MacIver Institute’s State of Higher Education. Since we’ve already reviewed the state of K-12 education, it’s a good time to take a look at how students in Wisconsin’s universities and colleges are faring.

Of course, this year is unlike any other. The COVID-19 pandemic has drastically changed what “back to school” means for every UW campus.

UW-Madison started off the school year in a hybrid model, and temporarily moved fully remote from September 10-25, after less than a week of classes.  Now,  an estimated 37 percent of classes are fully in-person, 55 percent are completely online, and 8 percent are a hybrid of the two.

In order to prevent students from traveling home for the holidays and then coming right back to Madison, all classes will move to virtual after Thanksgiving break through the rest of the semester. That means this December, the university will run its first-ever all-virtual final exams.

UW-Milwaukee was the first UW campus to close last spring, and this fall, UWM is using a hybrid model. Nearly 22 percent of classes are in-person, 59 percent are completely online, and 19% are hybrid. The university is not planning to move fully virtual after Thanksgiving.

UW-Eau Claire, UW-La Crosse, and UW-Green Bay are among the other campuses using similar hybrid models.

Campuses are already looking toward spring planning, too. Many campuses, including Madison, have already announced plans to eliminate spring break and instead start the semester a week later in order to reduce travel.

Every year, the Department of Public Instruction (DPI) releases data showing the percentage of students enrolled in postsecondary institutions after graduating from Wisconsin high schools.

Of all 2019 graduates, 58 percent enrolled in a post-secondary institution in the fall after graduating high school. Another 1.4 percent of students went to school after a year-long break.

Of the 2018 graduates, 59 percent went right back to school, while another 5.7 percent of students enrolled a year later. 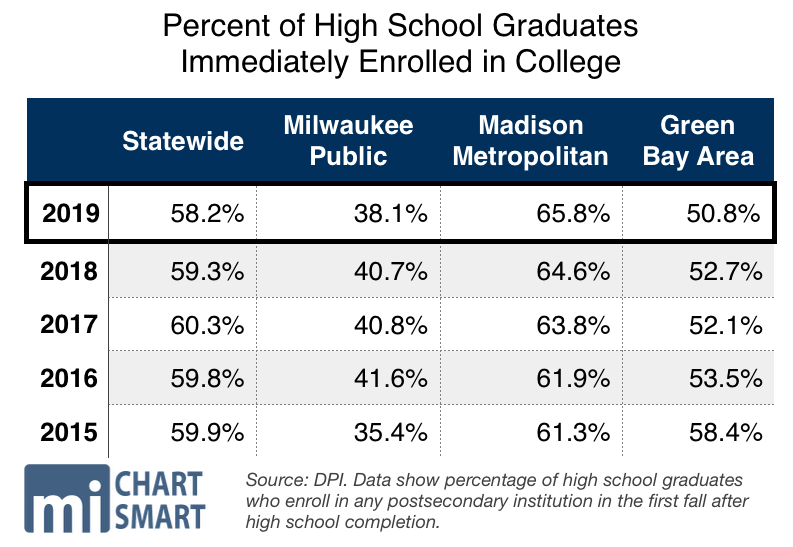 Notably, DPI changed how they report this figure in recent years. Until recently, the agency simply reported the number of students who reported enrollment in an institution of higher learning. When numbers were updated every year, they slowly ticked up, as students who took gap years went back to school.

Now, the agency splits apart those enrolled by the first fall after high school, the second fall, and any later enrollment. That’s a smart change and helps us understand trends more clearly.

Overall UW System enrollment has slowly trended downward for ten years since a peak in fall 2010. In fall 2019, 167,688 students attended the UW system.

Enrollment trends have differed widely across campuses. At UW-Madison, enrollment has trended upward for decades, even as system-wide enrollment fell. In fall 2019, 44,993 students were enrolled at UW-Madison—the most recorded since public records begin in 1973.

Other campuses have seen much more volatile enrollment. UW-Milwaukee, for example, saw enrollment shift up and down, often at times when Madison enrollment only grew. A total of 26,139 students were enrolled in fall 2019, fewer than the prior year.

Historically, about 32 percent of Wisconsin high school students have enrolled in the UW system immediately after graduation. In 2019, that figure fell to 28.6 percent, the lowest percentage since 1982.

As overall enrollment has ticked downward, tuition has remained flat for many students. Since former Gov. Scott Walker’s 2013-15 budget, the state has imposed a tuition freeze for instate undergraduate students. The policy has been renewed in every budget since. 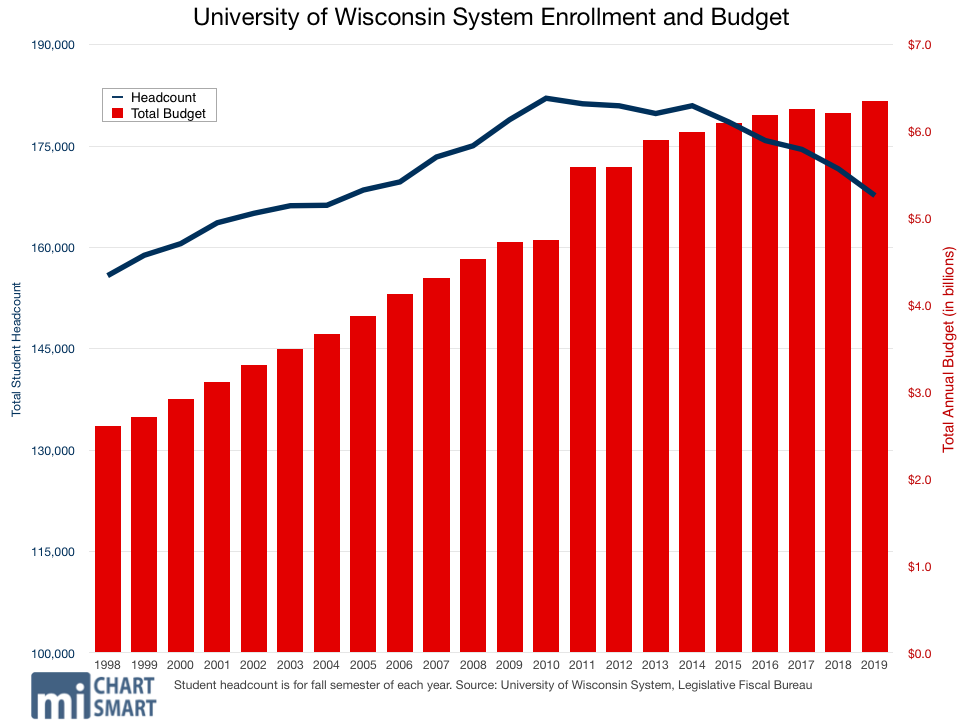 However, graduate schools have been able to raise tuition—including during the pandemic closures. No students have received tuition reductions since school has moved online, even though they are paying for an inferior product compared to just last year. The UW Law School, for example, raised tuition by $1,000 per semester for all students, despite the changes.

It’s an issue we covered in our State of K-12 Education, but this one fits squarely in the world of both K-12 and higher ed: remedial education.

Students who take remedial classes at UW pay full tuition for their courses, but receive zero college credit. Classes do not count toward degree completion, or even the total general education credit count.

Not surprisingly, those who have to take remedial classes in college are less likely to graduate, leaving them with thousands of dollars in debt, but no degree. Students who do graduate are likely to take longer, increasing their college debt.

With all the discussion of college affordability, the problem of remedial education would be a good place to start. The UW System has reportedly worked more closely with K-12 schools to address the problem in recent years, but the problem is still woefully unrecognized and unsolved.

We cover this important issue in both our K-12 and higher education roundups, because both systems must take responsibility. Students should be learning algebra far before they step onto a college campus, and universities should focus less on potential tuition windfalls when admitting students.

That wraps it up for our annual State of Higher Education: 2020 Edition. Any issues we’re missing? Just let us know below, and On, Wisconsin.