Some positive signs? May sales taxes down 10%, but year-to-date sales tax collections up 2.2%

Year-to-date withholding tax collections are up 3.5%

Our state has faced financial challenges before and we were able to solve those issues without raising taxes. I know we can do it again - State Sen. Alberta Darling on Wisconsin's worsening fiscal condition 6/2020 Click To Tweet

The non-partisan Legislative Fiscal Bureau (LFB) released a memo earlier this week outlining the state’s current fiscal condition and giving taxpayers the first comprehensive look at the extent of the damage done to the economy by the COVID-19 lockdown.  LFB estimates year-to-date tax collections in Wisconsin are down $380 million compared to this time last fiscal year. The agency estimates $1.3 billion in tax revenues for the month of May, $66 million below May 2019 revenues.

April 2020 was the last full month that Wisconsin was in statewide lockdown under Gov. Evers Safer at Home Order. The order was struck down by the Wisconsin Supreme Court on May 13.

According to Rep. John Nygren, Assembly Co-chair of the Joint Committee on Finance, tax collections were supposed to be $303 million higher than collections in the 2018-19 fiscal year. Now they are down by $380 million.

“No one should be shocked by the drop in expected revenue,” said State Senator Alberta Darling, Senate Co-chair of the Joint Committee on Finance, considering the months-long economic shutdown.

Darling notes, “Our state has faced financial challenges before and we were able to solve those issues without raising taxes. I know we can do it again. We can’t demand taxpayers bail out our financial issues when the lock-down created so many financial issues for taxpayers.”

There are some positive signs that the economy could be picking up, according to the Fiscal Bureau. Despite the $66 million decline in May 2020, collections in May appear to have improved from collections in April 2020. Comparing the differences between April and May 2020 declines, it appears revenues are reflecting an increase in economic activity since the lockdown ended.

The LFB says that 636,998 Wisconsinites had filed for unemployment between March 15 and June 6. This is a staggering 1,099% increase from the 53,131 requests filed year-to-date in June 2019. At peak unemployment on April 18, over 320,000 people were actually receiving unemployment benefits. By May 23, that number had reduced to 269,055 people collecting benefits, a 19% decrease from April.

The sales tax numbers give us an idea of which industries have been impacted the most by the lockdown. Taxable sales are down in apparel and accessories by 74 percent, restaurants and bars by 53 percent, and motor vehicle sales down by 28 percent this year. Some segments of the economy have experienced increased activity despite the lockdown order. Taxable sales are up among non-store retailers (like Amazon) by 83 percent, building and gardening supply retailers by 23 percent, and grocery stores by 18 percent. For the stores that reported an increase in sales, their April 2020 taxable sales were $403 million, 38 percent higher compared to April 2019.

While Wisconsin did see decreases in certain retail sales tax revenue, the decreases were less dramatic in some industries compared to national statistics. The Fiscal Bureau says that the economic hit taken by certain industries – the motor vehicle and parts industry, gas, furniture, and appliance industries – was smaller than in other states.

The LFB estimates that by the end of this fiscal year, June 30, 2020, Wisconsin’s general fund gross balance will be $1.1 billion. Their estimate accounts for the tax changes enacted by the Coronavirus Aid, Relief, and Economic Security (CARES) Act and 2019 Act 185, Wisconsin’s COVID-19 response act.

The Fiscal Bureau cautions that the gross balance of the general fund will decrease as the year goes on. 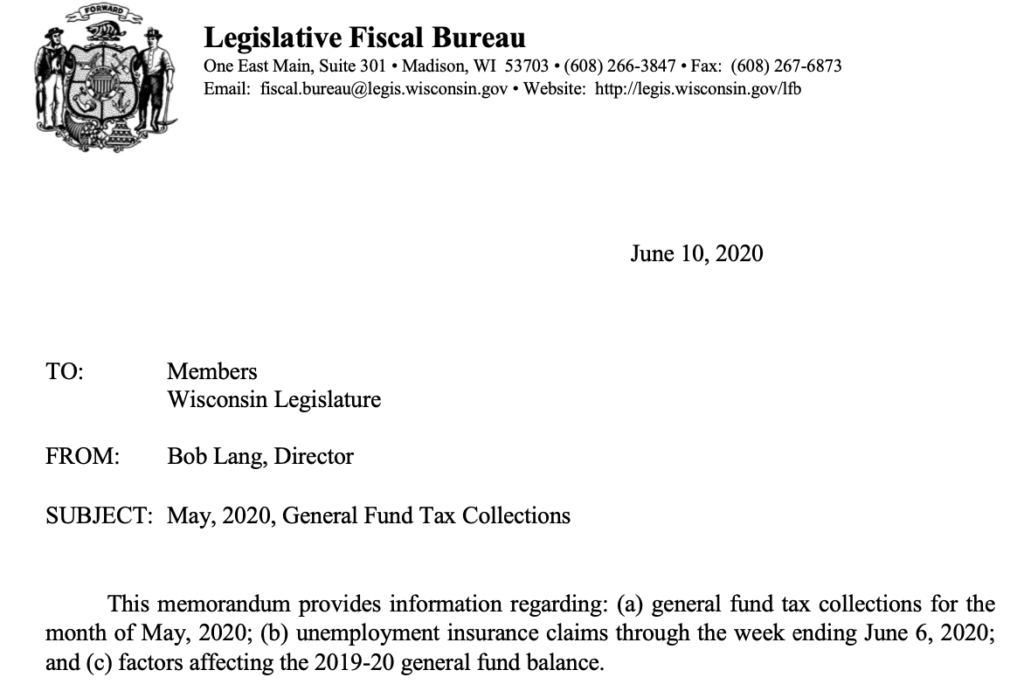 Some items that the Bureau believes will stabilize the economic decline will be a $189 million sum that was meant to transfer to the budget stabilization fund, but will stay in the general fund instead. The budget stabilization fund now has $656 million saved, which could also mitigate the deficit if the legislature and the Governor pass a bill to spend it. The DOA announced in April that they are making $70 million in cuts from state agency budgets. LFB believes that this will help as well.

Finally, the Evers Administration recently restructured some of the state’s debt to be paid off over a five-year period, rather than during the current fiscal year. This will save $66 million in debt service payments in 2020. The Fiscal Bureau believes this will also help mitigate the state deficit.

Immediate savings are a must right now, but restructuring state debt is not the right way to do it. While this debt payment is pushed off for the next five years, interest will rack up. The LFB memo doesn’t say how much more in interest the state will pay. Even if it will save $66 million in the short term, this move sets the taxpayers up for more debt payments later.

“[Evers] is also adding costs to taxpayers by delaying debt payments, something he criticized Gov. Walker for doing. The Governor needs to get to work instead of protecting government at the expense of taxpayers,” Nygren said.

The MacIver Institute will continue to monitor the economic impact of the COVID-19 lockdown on taxpayers and bring you updates and analysis as they become available.