Milwaukee Public Schools (MPS) will host a virtual public hearing this week on its proposed $1.22 billion budget for 2020-21.

The district’s operations fund is facing an estimated $304 million deficit just three years into the future. Despite the looming threat, the budget does little to address the district’s structural fault lines.

The budget document projects enrollment for 2020-21 to be 74,966 students across 158 schools. Enrollment has steadily declined at MPS for decades.

This year’s budget also includes the first phase of the $87 million operational referendum approved by voters in April. The district will be able to spend beyond property tax caps called revenue limits for four years under the plan, beginning with $57 million in increases this year.

The largest line item in the referendum proposed budget would be $25.5 million in salary and benefits for attracting and retaining staff. 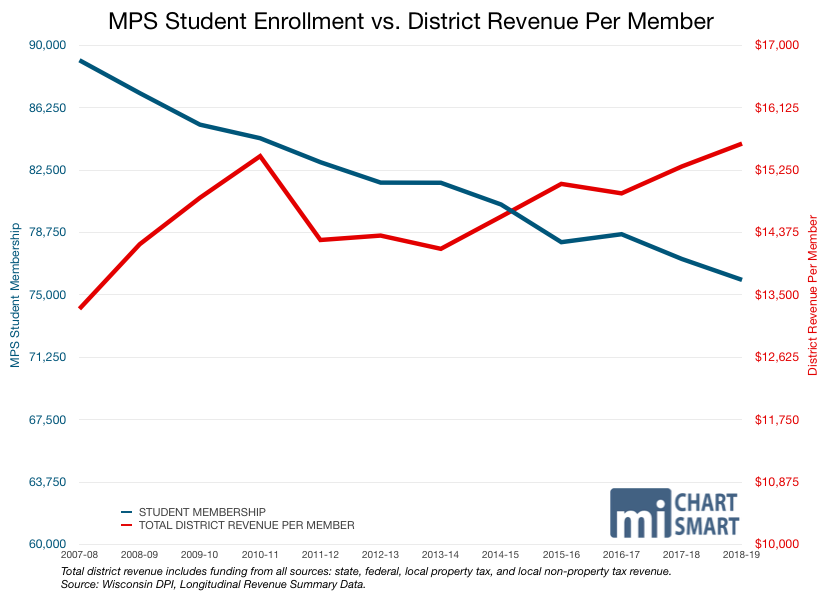 The city has also reassessed property values this year, which is sure to result in another property tax increase. The average property value increase was over 9 percent, according to the recently completed evaluation. Residential properties were found to have an increased value of nearly 12 percent.

Properties need not have seen any improvements in the last year to be assessed at a higher rate – and thus taxed more heavily – because assessments are based on a comparison of the sale of similar properties.

Some property owners saw spikes as high as 25 percent over last year, all but ensuring this winter’s property tax bills also spike.

Unemployment claims have skyrocketed in the face of the COVID-19 crisis. On May 17, 4,207 applications were filed for unemployment insurance, more than ten times the 427 applications submitted on the same day last year.

With a flurry of new taxes, increased spending, and a struggling economy, tremendous challenges are ahead for Milwaukee taxpayers.