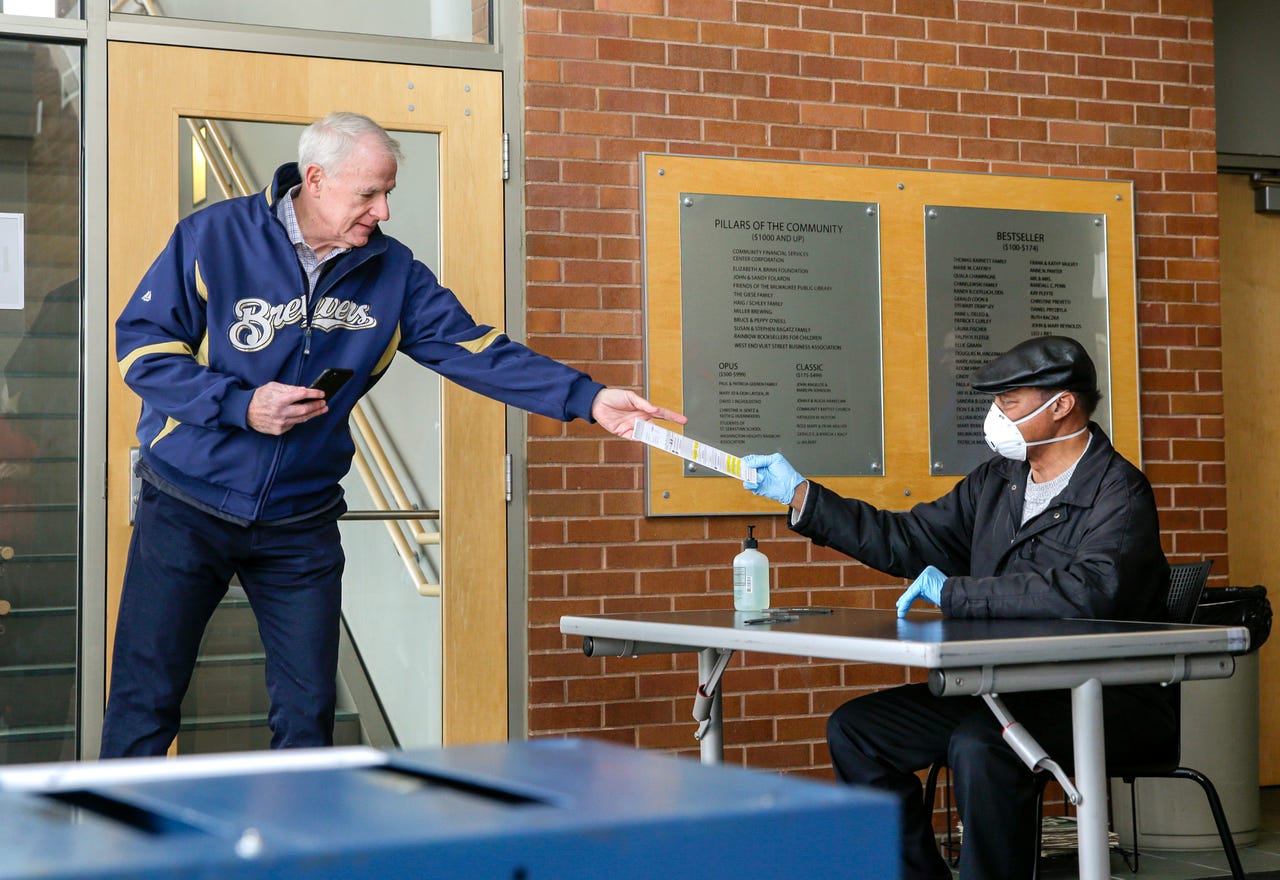 Governor Evers, Milwaukee Mayor Tom Barrett, and pretty much every Democrat in the country have pretended to be outraged over everything about this election, but as Dan O’Donnell proves, it is all transparently and provably disingenuous.

Wisconsin Governor Tony Evers is outraged.  Milwaukee Mayor Tom Barrett is outraged.  Pretty much every Democrat in the state and thousands more following the ongoing saga of Wisconsin’s Spring Election are outraged.  How dare Republicans endanger lives by holding in-person voting in the middle of the Coronavirus pandemic!  How dare they force Wisconsinites to take their lives into their hands! How dare they…publicly say for weeks that the election must go on as scheduled and then abruptly reverse course only when members of their own party revolted against them a few days go?

They didn’t.  Governor Evers did.  And then he began disingenuously blaming Republicans in the Legislature for his own fecklessness.

On March 17th, the day after he issued an executive order banning public gatherings of more than ten people, he explicitly stated that he did not want to postpone the election.

“How long do we potentially leave offices not filled because we’re into July or August and we haven’t held a general election?” he rhetorically asked during a conference call with reporters.

“Ensuring the health and safety of Wisconsinites is our top priority,” his spokeswoman added, “but the governor has said repeatedly that our democracy must continue.”

The same day, Evers issued a second executive order adding “any location or facility used as a polling location or in-person absentee voting” to the list of essential businesses that would remain open.

Even after he issued a “Safer at Home” order all but shutting down Wisconsin the following Tuesday, Evers refused to postpone the election.

A few days later, when a liberal group sued the state seeking a delay or cancellation of in-person voting, Evers even submitted a “friend of the court” brief in which he argued that “ultimately, a predominantly-by-mail election, with limited but available in-person voting, would be an achievable middle ground that would help protect Wisconsinites’ right to vote, while also helping to keep them safe.”

Only when POLITICO ran an article deeply critical of Evers’ obstinate refusal to postpone the election, the rest of the national media started piling on, and absentee ballot returns from heavily conservative counties started to flood in did he abruptly change course…five days before Election Day.

Nothing medically had changed.  The virus wasn’t spreading any more rapidly than it was the day before, voting wasn’t any more dangerous than it had been, but Evers decided to deflect the blame to the Republican Legislature.

Democrats were perfectly fine with in-person voting for weeks when Evers insisted on it, and only shrieked about how dangerous it supposedly was when they could blame Republicans for it.

“If the governor had legitimate concerns, we could have come to a bipartisan solution weeks ago,” Assembly Speaker Robin Vos and Senate Majority Leader Scott Fitzgerald said in a joint statement on Friday.  “This discussion would have happened long before today. The only bipartisan discussion we’ve had was to ensure the election would continue safely and to maximize the opportunity to vote absentee.”

Vos and Fitzgerald were open to postponing the election when Evers first started shutting down the state, but Evers refused to discuss the possibility.  He was resolute in his decision to push forward.

Until, in an instant, he wasn’t.  Then he was outraged, outraged that Republicans weren’t as caring and compassionate as he suddenly was.  So outraged, in fact, that he felt as though he had no choice but to issue an executive order the day before the election postponing the vote for two full months.

“I cannot in good conscience stand by and do nothing,” Evers said in a news release announcing the order.  “The bottom line is that I have an obligation to keep people safe, and that’s why I signed this executive order today.”

When the Wisconsin Supreme Court struck that order down a few hours later, Evers laid on the faux outrage even more thickly.

“Tomorrow in Wisconsin,” he said in a news release, “thousands will wake up and have to choose between exercising their right to vote and staying healthy and safe. In this time of historic crisis, it is a shame that two branches of government in this state chose to pass the buck instead of taking responsibility for the health and safety of the people we were elected to serve.”

In reality, the Wisconsin Supreme Court simply ruled that Governor Evers did not have the authority to unilaterally delay an election.  And guess who agreed with them? Governor Evers, several days before he decided that he was outraged by it.

“We have three branches of government to ensure a system of checks and balances, and questions about our elections typically rely on all three playing a role,” he had tweeted on April First.  “If I could have changed the election on my own I would have but I can’t without violating state law.”

“Folks, I can’t do this, move this election or change the rules on my own,” he added in a videotaped address two days later.  “My hands are tied.”

The Supreme Court merely agreed with him, but now Evers is outraged that it did.

The Wisconsin Supreme Court ruled that Governor Evers did not have the authority to unilaterally delay an election. And guess who agreed with them? Governor Evers.

His faux outrage pales in comparison to that of his fellow Democrats, though, who have been working for days to convince Americans that Wisconsin Republicans—not Governor Evers—had insisted on holding the election amid the pandemic.

“Today, Wisconsin voters had to choose between making their voice heard and keeping themselves and their family safe,” tweeted former First Lady Michelle Obama.  “No American should ever have to make that choice.”

“Voters Forced to Choose between Their Health and Their Civic Duty” screamed a headline in The New York Times.

“No one should have to make a choice between exercising their right to vote and staying safe during a public health crisis,” tweeted New Jersey Senator and former presidential candidate Cory Booker.

“This was a dark day for our democracy,” said Democratic National Committee Chairman Tom Perez.  “In the middle of one of the worst public health emergencies in modern history, the Republican Party forced the people of Wisconsin to choose between their safety and their vote.”

Voting is the only one of these activities that is a sacred right that Evers himself said “people have bled, fought, and died for…in this country.”  If Coronavirus didn’t delay Wisconsinites’ ability to buy sporting goods, then why should it delay their right to vote?

If Coronavirus didn’t delay Wisconsinites’ ability to buy sporting goods, then why should it delay their right to vote?

No one was more hysterical in promoting the idea that Republicans were forcing voters to gamble with their lives than Milwaukee Mayor Tom Barrett (who is on the ballot facing re-election).

“Under the present circumstances, in-person voting, particularly with lines of people, is simply not safe, feasible, or responsible,” he wrote in an open letter to the Wisconsin Legislature on March 24th. “In good conscience I would not ask one of my loved ones to sit in a room for hours greeting dozens of people during this pandemic. I can’t expect citizens of my city to do that either.”

On Wednesday, he said during a conference call with reporters that it was flat out dangerous to vote in person.

On Sunday, Barrett was so outraged that people would have to quite literally risk their lives to cast a ballot that he joined with other liberal mayors in Wisconsin to write a letter urging Health Services Secretary Andrea Palm to ban in-person voting.

“We need you to step up and stop the State of Wisconsin from putting hundreds of thousands of citizens at risk by requiring them to vote at the polls while this ugly pandemic spreads,” they wrote.  “We believe it would be irresponsible and contrary to public health to conduct in-person voting throughout the state at the very time this disease is spreading rapidly.”

So outraged was Barrett that people would spread the disease even more rapidly by voting in person that he…voted in person himself.

On Saturday, the day before the letter was released to the public and after nearly two full weeks of Barrett venting his outrage over the specter of in-person voting, he cast his ballot in person at the Washington Park Library.

So unconcerned with the grave danger to his health and the health of the poll workers with whom he was coming into contact that Barrett didn’t bother to wear a mask, gloves, or any personal protective equipment at all.

Even though he had just ended 14 days of self-quarantine after coming into contact with someone who tested positive for Coronavirus, Barrett’s very first public action was to engage in the very behavior that he claimed was simply too risky for others.

Democrats were fine with in-person voting for weeks when Evers insisted on it, and only shrieked about how dangerous it supposedly was when they could blame Republicans for it.

His outrage over in-person voting was thus revealed to be rather obviously phony.  It was, however, perfectly in line with the shameless political opportunism of his party.  Democrats were perfectly fine with in-person voting for weeks when Evers insisted on it, and only shrieked about how dangerous it supposedly was when they could blame Republicans for it.

This is demonstrably transparent, and as disingenuous as it is cynical.  If Democrats were really as concerned as they pretend to be about in-person voting spreading Coronavirus more acutely than an average Walmart, they would have criticized Barrett for voting in person and then holding a press conference at his polling place.

If Barrett really believed as surely as he pretended to that in-person voting was dangerous, he wouldn’t have done it himself (and certainly wouldn’t alert the press that he was going to do it).

It was all faux outrage, all of it.  And it was all pre-packaged, weaponized against Republicans, amplified by a friendly media, and passed off to the public as genuine concern.

This may have been an unprecedented Spring Election in Wisconsin, but for Democrats, it was business as usual.