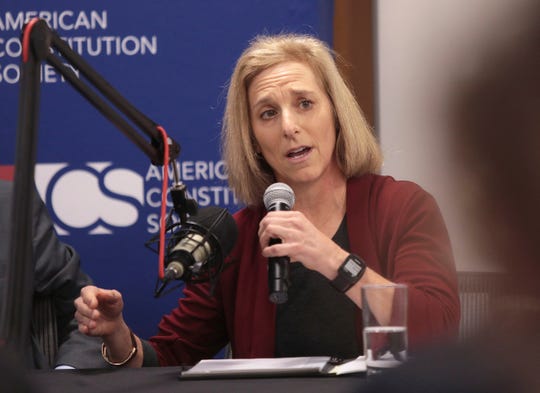 The Wisconsin Supreme Court candidate is promising the state that she will hold violent criminals accountable, but Dan O’Donnell examines her record as a soft-on-crime judge and finds that this is a lie.

Karofsky, the ad continues, has “locked up criminals and protected families as a prosecutor and now as a trial judge.”

“Whether you’re a violent criminal or a corrupt politician, I will hold you accountable,” Karofsky says as she looks directly into the camera, desperate to convince you that she doesn’t mess around.

Just a month before she announced her Supreme Court run, the Dane County District Attorney’s Office begged her to sentence Daniel Lieske, a brutal murderer to life in prison without the possibility of extended supervision.

Lieske (61) was convicted of the calculated murder of 21 year-old Jesse Faber last April.  So callous and remorseless was Lieske that he laughed and joked with friends just hours after shooting Faber to death and hiding his body in a storage unit.

Karofsky has repeatedly bent over backwards to not hold violent criminals accountable.

Dane County District Attorney, Ismael Ozanne, who personally prosecuted the heinous crime, joined with the Faber family in pleading with Karofsky to throw the book at Lieske.  If any crime warranted it, certainly this one did.  Especially in the “arena” of a judge who “doesn’t mess around.”

Instead, Karofsky handed Lieske the most lenient sentence she legally could.

“I know some of you wanted the most maximum sentence in this case and were I sitting in your seat, I would want the exact same thing, too,” Karofsky said to the heartbroken Faber family after issuing the stunningly light sentence.  “You don’t have to like this sentence or agree with this sentence. The reason behind my sentence is that Mr. Lieske would be 81 years old [when he gets out of prison].”

Solely because Lieske would be old, Karofsky allowed him to live out his golden years as a free man even though he had robbed another man of all but 21 years of his life.

It was a sentence so inexplicable that it would shock the conscience if it wasn’t part of a longstanding pattern of Karofksy coddling just about every hardened, convicted criminal who had the good fortune of landing in her “arena.”

In 2018, for instance, a repeat child sex offender named Jay Perez was convicted of the brutal rape of his five year-old adopted sister…while their four year-old brother sat crying outside the room.

For years, Perez kept his victim quiet by threatening that if she ever told, she would be taken away from her family.  Eventually, she became so depressed that she dropped out of school and began harming herself.

For the brutal execution-style murder of a 21-year-old man and then hiding his body in a storage locker, Judge Karofsky gave Daniel Lieske (61) the lightest sentence allowed. That was just last year.

Perez refused to accept a plea deal and went to trial.  After he was found guilty on all five felonies with which he was charged, he faced a maximum sentence of 225 years in prison.

In 2015, he was convicted of groping two teenage girls outside of their school and then, while still on probation, went before Karofsky on a charge of domestic battery.  She sentenced him to nine months in jail with work release privileges and, while he was out, he groped a 12 year-old girl as she walked to school.  He was charged with first degree child sexual assault and, as a repeat offender, faced a maximum sentence of 66 years in prison.

Karofsky sentenced him to just a year in jail and five more years of extended supervision.

According to the Wisconsin Sex Offender Registry, Keodouangsy is homeless, meaning that he could be literally anywhere and totally free to grope more girls as they walk to school.

As soft on murder and child sex crimes as Karofsky has proven herself to be, she is just as soft on violent drug dealers…even when their product kills.

In 2018, Dane County prosecutors charged a well-known heroin dealer and career criminal named Kendall Ragland with first degree reckless homicide after he sold the heroin that killed a young man.

He faced 40 years in prison and despite his decades-long criminal record and refusal to admit his guilt following a no contest plea, Karofsky willfully ignored sentencing guidelines from the Wisconsin Department of Corrections and handed Ragland a gift of a two-year prison sentence.

“Let’s not worry about the recommendation,” she said during the sentencing hearing. “I will tell you that I don’t put a lot of weight on the recommendation of the Department of Corrections. I feel like that’s my job.

Karofsky is possibly the most terrifyingly lenient circuit court judge in Wisconsin, on the single most liberal, soft-on-crime court in the state

“I really don’t pay any attention to what the Department of Corrections recommends in PSIs [pre-sentence investigations].  Often, if I do look at it, I forget what the number is, quite frankly, by the end of the hearing or even by the time the hearing starts if I’ve looked at it in days prior to a hearing. As I sit here right now, I couldn’t tell you what it is.”

Karofsky’s willful ignorance of sentencing guidelines and dangerous desire to keep violent criminals on the streets is still harming Wisconsinites to this day.

Cleaster Moon was before Karofsky in 2017 following a battery and burglary crime spree and while he faced 40 years in prison, Karofsky sentenced him to just 18 months.

“There is no joy in sending someone to prison, especially when someone is as young as you are,” she told him during his sentencing hearing.

Although Moon has been in and out of jail since he was 17 years old and has a rap sheet longer than his leg, Karofsky believed him when he promised to change his ways, especially since he had a job interview scheduled at Madison-based Sub-Zero a few weeks later.

“I’m confident that if you go down the road that you’re talking about today,” she said, “you’ll end up, in the future, putting this behind you and — and working at a place like Sub-Zero.”

He didn’t.  The second he got back out on the streets, he went right back to committing crimes.

Moon, it seems, isn’t messing around, either.  His case, along with those of Lieske, Perez, Keoduangsy, Ragland, and dozens of other dangerous sociopaths given a break in Karofksy’s courtroom prove that her assurances that she has “locked up criminals and protected families” are dangerous lies.

She is in fact quite possibly the most terrifyingly lenient circuit court judge in Wisconsin.