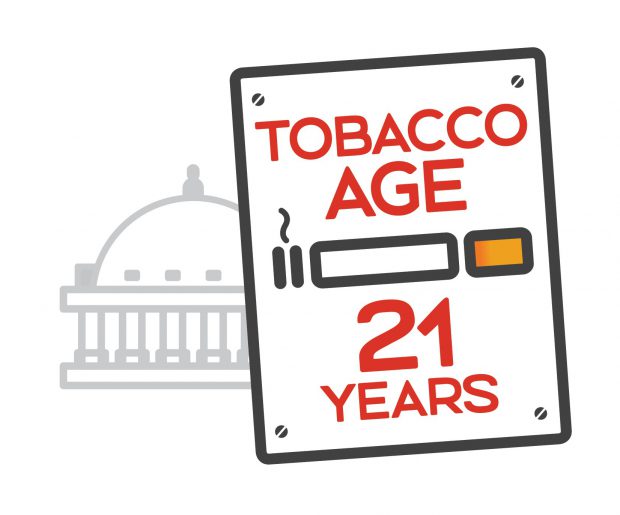 The Raise The Age To 21 bill proposed in Wisconsin received overwhelming support from a wide-ranging and diverse coalition of supporters in a State Senate hearing last week. Senate Bill 364 would raise the age to use or purchase tobacco, including vaping products that include nicotine, to 21 in Wisconsin. The authors of the bill are racing to get it passed out of committee and onto the Senate floor before the legislative session ends.

The Senate Committee on Health and Human Services, chaired by Senator Patrick Testin, heard from dozens of supporters who all voiced support for the amended bill and talked about the urgent need to act now.

Senator Howard Marklein (R – Spring Green) and Representative John Spiros (R – Marshfield), authors of SB 364 and the Assembly companion AB 422, testified about the use of tobacco by young people today and their desire, as lawmakers, to make it more difficult for teenagers to start using nicotine. The hope is that by raising the age to purchase or use tobacco from 18 to 21, it will remove the smoking or vaping of nicotine from our high schools. The American Lung Association supports the bill because it will “get vaping out of the hands of kids.”

In December of last year, Congress passed and the President signed the 21 to use tobacco law at the federal level. Spiros admitted that when that happened, he at first thought there was no need to proceed with the Wisconsin bill. However, both legislators and several of the individuals that testified believe that the Wisconsin legislation is still needed. First, the bill would set Wisconsin’s age limit to purchase tobacco to whatever the federal law is set at. If, in the future, the federal government revisits this law and readjusts the age limit, the bill would make it so that Wisconsin law would automatically follow.

State Senator Andre Jacque (R – DePere), a committee member, expressed concern over changing the age of majority and what will happen to those under 21 who have legally purchased tobacco products under the old law.

Marklein responded that this bill will not prevent or foresee every problem but it will make it more difficult for nicotine to find its way into our schools.

According to the American Heart Association, nearly 90 percent of adult smokers started before they were 18 and most young smokers get tobacco from friends who have turned 18.

Chairperson Testin pointed out that if the Legislature does not act, the state will lose 10% of a substance abuse block grant. The non-partisan Legislative Council attorney confirmed that Wisconsin stands to lose $2.7 million of a $27 million grant if the bill does not pass.

No one appeared at the hearing to oppose the legislation.

Dr. Brian Williams of UW Health testified that the Raise the Age bill is an important tool in the fight to remove vaping from our high schools and it could lead to 250,000 less premature deaths in the United States. According to Dr. Williams, raising the age to 21 is vital because it is much more difficult to become addicted to nicotine the later if life an individual starts using nicotine.

The Senate Health and Human Services Committee is expected to vote on SB 364 soon. For up-to-the-minute updates on SB 364 and all the legislation that is moving through the legislative process the last two weeks, follow @MacIverWisc on twitter and FB/MacIverInstitute.

To watch the hearing, please visit our friends at WisconsinEye.