Governor Tony Evers has vetoed the Legislative Republican package that would cut income taxes, personal property taxes and buy down $100 million in state debt. This comes after Republican leadership received a patronizing letter from the Governor last Friday claiming that he was ready to “come to a compromise on this issue.” 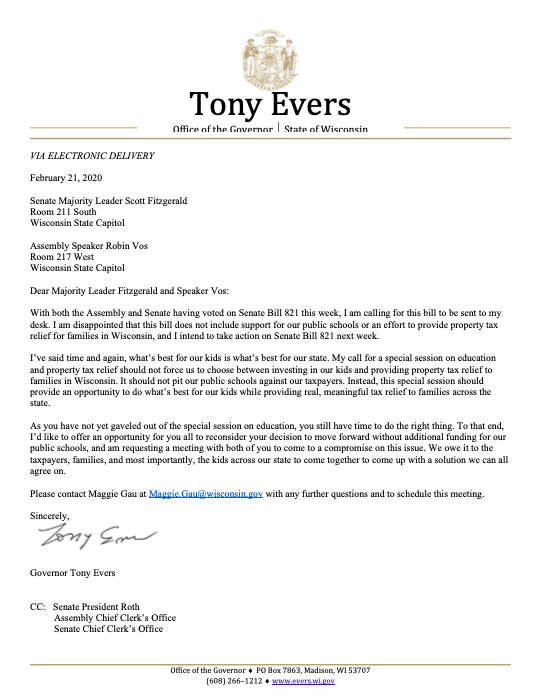 The Governor promoted his own plan to spend the state’s surplus on public K-12 support, including special education funding and buying down property taxes. He claimed the vetoed bill took an “unbalanced and unsustainable approach to state fiscal policy.”

Before introducing his own plan, Governor Evers had orginally told Adrienne Pedersen on WISN’s Up Front that he wanted to be “cautious” and “conservative” with the surplus. He dismissed the idea of using the money for tax relief, saying that he was “not open to one-time expenditures of money that we know is going to be an ongoing issue.”

“In the last four years, Republicans have increased state aid by 15 percent, increasing per student funding by nearly $1,000” wrote Assembly Speaker Vos. “The conservative budget that Governor Evers signed into law last year made the largest investment in K-12 schools in actual dollars and doubled the current funding for student mental health programs. Not one legislative Democrat voted for the budget that increased support for our schools.”

Senate Majority Leader Scott Fitzgerald pointed out that “this is the second income tax cut he’s vetoed as governor. His budget proposal last summer included over $1 billion in tax hikes.”

“The Governor’s sudden fixation on property taxes is ironic given his budget had the largest increase in property taxes in over 10 years” noted Representative Nygren, co-chair of the Joint Committee on Finance. The tax cut would have put “$250 million toward reducing income taxes for low- and middle-income families. Combined with income tax cuts in the state budget, the average filer would have saved $300 annually.”

Below is our original piece outlining the Madison debate on what to do with the revenue surplus. Read on if you need to catch up on each of the proposals. 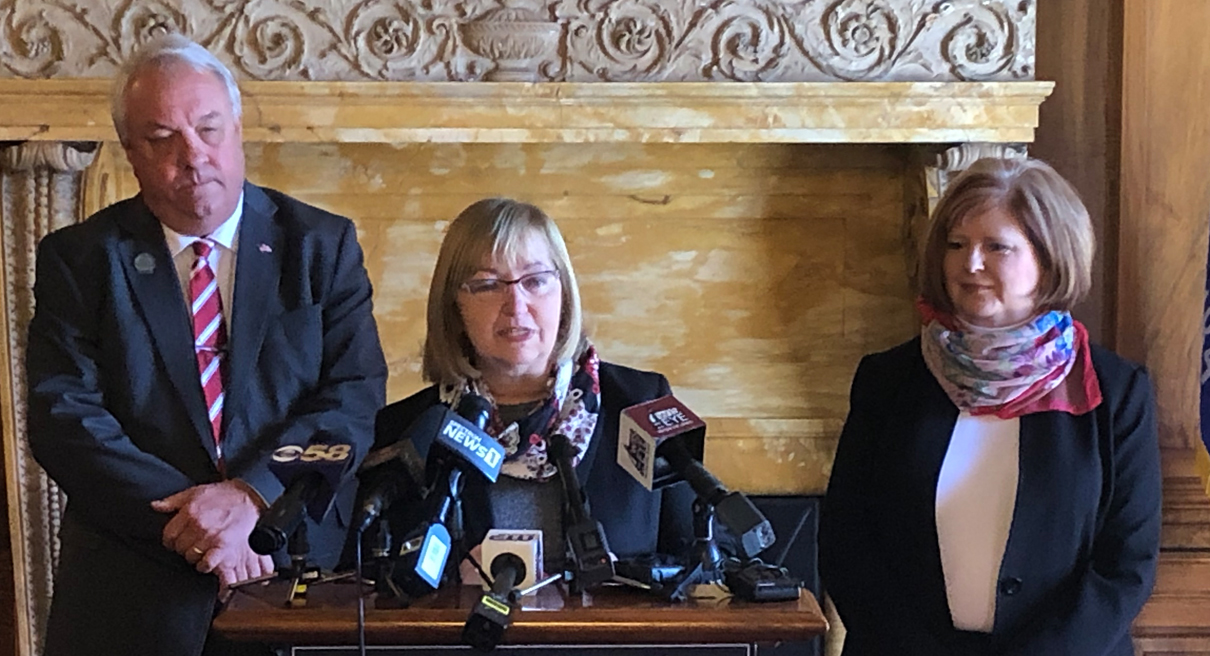 Governor, Senate, and Assembly offer plans to spend the “surplus”

Every January the State of Wisconsin faces a difficult decision thanks to a decade of government reforms and responsible fiscal policy – what to do with its budget surplus.

The Legislative Fiscal Bureau (LFB) announced on Jan. 24th the state is on track to collect an additional $818.2 million in taxes by the end of next fiscal year more than the state budget originally projected. By law, half of that goes straight into the rainy-day fund. Every decision maker in the state capitol has an idea of what to do with the other $400 million.

Gov. Tony Evers initially said the state needs to be cautious with its decision. He dismissed the idea of using the money for tax relief.

Less than two weeks later, Evers changed his tune. He proposed a plan to spend $250 million in state aid to school districts, plus another $10 million in sparsity aid, and then $130 million in equalization aid for property tax relief. This increase in education funding would likewise be a “one-year deal,” and lawmakers would be pressured to find ways to maintain it in the next state budget.

“We don’t have to choose between investing in our kids and reducing property taxes—we can do both. My plan recommits to our promise of two-thirds state funding for our schools and will provide $130 million in property tax relief through equalization aid. This is a no-brainer, folks. We know the bipartisan support is there, we just need elected officials to put people before politics,” Evers said in a Feb. 6th press release.

Keep in mind, with all this new and extra taxpayer support flooding to the schools, the K12 population is relatively flat… https://t.co/ffL4eiuri2 pic.twitter.com/RXvEtd2iXG

The Senate started floating the idea of property tax relief and paying off some of the state’s general obligation bonds. Nothing was ever formally proposed.

Assembly Republicans’ plan includes $214.5 million in individual income tax relief, $44.7 million in new exemptions for personal property, and an additional $100 million debt service payment. These changes would all apply to taxes in 2020.

News of Assembly GOP's plan to use $250 million of the state surplus to cut taxes, comes on the heels of Gov. Evers' plan to put $250 mil of the surplus toward school spending. https://t.co/IUQu8ZftpB

Senate Republicans are on board with this plan.

“The size of our budget surplus was much higher than I ever anticipated. After discussions with the Senate Republican caucus and Speaker Vos, I fully support the direction we’re headed with this plan. Wisconsin Republicans are once again putting taxpayers first. Our reforms have left the state with a massive surplus that belongs to the taxpayers,” Senate Majority Leader Scott Fitzgerald said in a statement on Friday.

Fitzgerald pointed out that Republicans are responsible for $13 billion in tax cuts in Wisconsin over the past ten years.

Republicans are rejecting $130 million in property tax relief for WI homeowners. Worse yet, they are depriving students the opportunity of a quality education by ignoring @GovEvers special session to invest in classrooms, special education, mental health care, and rural schools.

“This smart budgeting over the last ten years is paying big dividends for our Wisconsin taxpayers,” Rep. Joan Ballweg (R- Markesan) said at the Assembly press conference on Friday. “These pro-growth reforms and tax cuts are increasing incomes. We continue to have low unemployment. That has contributed to our strong economy.”

The Joint Committee on Finance will take it up on Monday. The Assembly is expected to vote on it on Tuesday.