Wisconsin taxpayers received some good news this month: the tax burden has fallen for the eighth year in a row. In 2019, Wisconsinites spent 10.3 percent of personal income on state and local taxes, according to the Wisconsin Policy Forum. 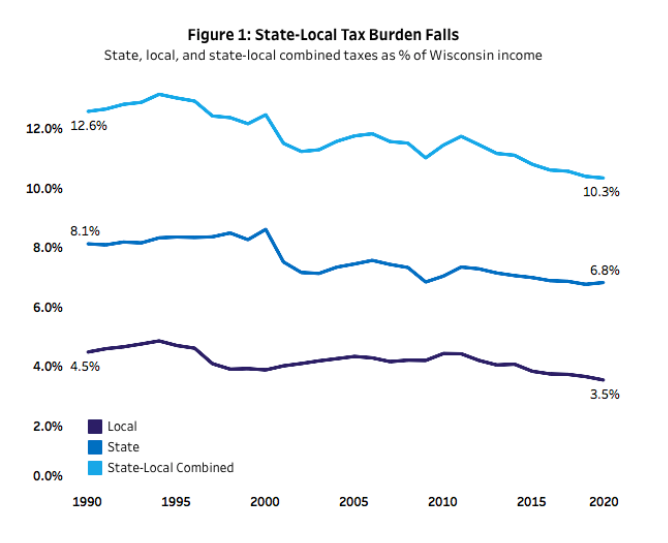 That’s the lowest tax burden since the nonpartisan organization began tracking the metric in 1970.

And this week, news from the Legislative Fiscal Bureau showed tax revenues climbed even higher than expected. The state is now expecting tax revenues to be $818 million higher than earlier forecasted and the budget will end with  a net general fund balance of $620 million. The balance is $452 million more than projected in the summer of 2019, when the 2019-21 biennial budget was enacted.

Now, legislators are debating how to best use the surplus.

In a response to the news, Assembly Speaker Robin Vos (R-Rochester) said legislators would work to return the surplus to taxpayers and not grow government. Senate Majority Leader Scott Fitzgerald (R-Juneau) floated immediate property tax relief as one option.

In response to the new estimate, .@SpeakerVos said “In this growing economy, we’re not going to grow the size of government. While Dems will likely try to spend every cent, we will make sound fiscal decisions & return surplus dollars to the people who earn them. #ItsWorkingWI

Vos credited the “tax reductions, an attractive business climate, and responsible budgeting” for the revenue figures, and contrasted the state’s approach with that of the federal government. He also contrasted Republican goals with those of the Democrats.

Wisconsin has long struggled with its high tax burden, which fell by more than $13 billion during former Gov. Scott Walker’s eight years in office with a Republican-controlled Legislature. Thanks to continued dedication on the part of the executive and legislature in reducing rates, the state has made meaningful progress. At the same time, Wisconsin has invested record amounts in its Budget Stabilization Fund, also known as the “rainy day fund.”

Still, the state isn’t out of the water yet. Other metrics show that Wisconsin has a long way to go. Wisconsinites face the 13th highest income tax burden in the country and pay the 5th highest property tax burden on a median-value home. The business tax climate is ranked at the 26th in the nation.

Those metrics are all the more reason to consider continued efforts to lower Wisconsin’s tax burden. A flat income tax is one option that would vastly improve Wisconsin’s future. The unanticipated revenue could be used to transition to a flat tax.

MacIver Institute President Brett Healy commented “we can use the temporary revenue surplus to create a simpler, fairer tax code that will lower the tax burden for everyone. A low 3% flat tax will help Wisconsin attract new families, recruit new businesses, keep our retirees from leaving and entice college graduates to work in the state.”