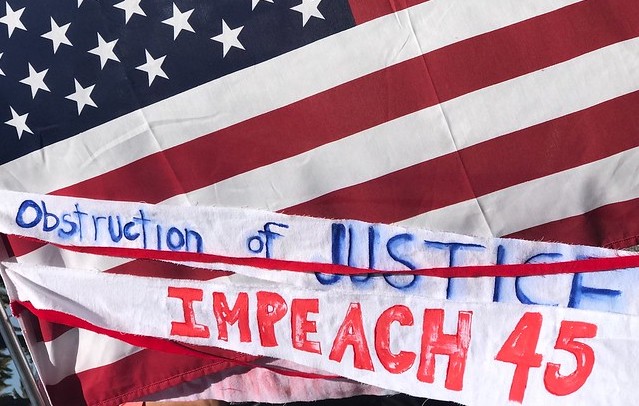 The most striking thing about President Trump’s impeachment trial is how routine it all feels.

That cable news anchors had to constantly remind their audiences of the “historic” and “powerful” significance of the moment when House Democrat impeachment managers walked the Articles of Impeachment to the Senate is telling: Nothing about it was overly historic or powerful at all.

That House Speaker Nancy Pelosi had to constantly remind her caucus that this was a “grim” and “solemn” process (as she smiled widely while signing the Articles) is revealing: Nothing about Democrats’ behavior these past four months has reflected anything but barely concealed glee.

Impeachment is no longer a solemn, powerful remedy for presidential malfeasance; it’s a political weapon that the opposition can’t wait to wield.

Impeachment is no longer a solemn, powerful remedy for presidential malfeasance; it’s a political weapon that the opposition can’t wait to wield.

“The Campaign to Impeach President Trump has begun,” screamed a banner headline in The Washington Post on January 20, 2017…the day Trump was inaugurated.

As Vanity Fair noted at the time, Democrats were already “paving the way to impeach Donald Trump.”

Following three fruitless years’ worth of FBI and special counsel investigations, though, Democrats faced the unpalatable reality that President Trump might stand for re-election without being tainted by the stain of impeachment.  This, of course, was unacceptable, so the day after former Special Counsel Robert Mueller’s doddering testimony, they settled on a phone call between Trump and Ukrainian President Volodymyr Zelensky to serve as the basis for their last-ditch effort to bloody the President up politically before the 2020 campaign ramped up.

The impeachment of President Trump is far more about the animosities, partialities, influence, and interest of the Democrats who control the House… than it is about a real demonstration of innocence or guilt.

This need to move quickly (lest the voters be allowed to decide the presidency next year) led to the narrowest impeachment in American history buoyed not by material witness testimony—which would have been held up in the federal court system for months—but by staggering amounts of hearsay, conjecture, innuendo, opinion, and outright guessing from a string of House witnesses who seemed to know less about their case than Mueller knew about his.

Now, after months of insisting that impeachment move as quickly as possible—that there simply wasn’t time to let the courts rule on a fight over Congressional subpoenas and Executive Privilege—Democrats are demanding that additional witnesses be called and that the trial be significantly lengthened.

Such rank gamesmanship belies the accompanying insistence that this is a very serious, momentous process.  Perhaps it might have been had it not been so utterly transparent.

Impeachment, as the Founders intended it, was to be reserved only for the most egregious cases of what George Mason called “maladministration” by the President—cases so serious and weighty that they would be immediately recognizable as “high crimes and misdemeanors” (the compromise phrase Mason and James Madison settled on) and thus widely accepted as necessitating such a dramatic remedy.

The building of broad, bipartisan consensus for impeachment was therefore imperative.

“A well-constituted court for the trial of impeachments is …difficult to be obtained in a government wholly elective,” Alexander Hamilton wrote in Federalist No. 65.  “The subjects of its jurisdiction are those offenses which proceed from the misconduct of public men, or, in other words, from the abuse or violation of some public trust. They are of a nature which may with peculiar propriety be denominated political, as they relate chiefly to injuries done immediately to the society itself.”

This isn’t just a political game; it is a dangerous affront to the Constitution itself.

Hamilton rather obviously realized and feared that the gravity of the impeachment process could be politicized and weaponized.

“In many cases it will connect itself with the pre-existing factions, and will enlist all their animosities, partialities, influence, and interest on one side or on the other; and in such cases there will always be the greatest danger that the decision will be regulated more by the comparative strength of parties, than by the real demonstrations of innocence or guilt,” he wrote.

The impeachment of President Trump is far more about the animosities, partialities, influence, and interest of the Democrats who control the House (and impeached him without a single Republican vote) than it is about a real demonstration of innocence or guilt.

Were it, the Articles of Impeachment would have included the specific charge of bribery (one of only two explicitly mentioned in the Constitution) instead of the vague “abuse of power.”  So hell-bent on finding something, anything impeachable were House Democrats that their second Article, “obstruction of Congress,” essentially criminalized the President’s perfectly legal and constitutional assertion of Executive Privilege.

This isn’t just a political game; it is a dangerous affront to the Constitution itself.  If legal, permissible activity by a President is twisted into an impeachable act by an opposition planning for impeachment since before Inauguration Day, then there is no reason why what was once a serious, somber process won’t become even more routine in the future.

Impeachment would no longer concern itself with any sort of demonstration of innocence or guilt, it would be an inevitability every time the House of Representatives and presidency are controlled by opposing parties.  That isn’t a wild hypothetical, either.  The groundwork for it has already been laid.

If Nancy Pelosi is looking for something truly grim in all of this, she found it…and she created it.