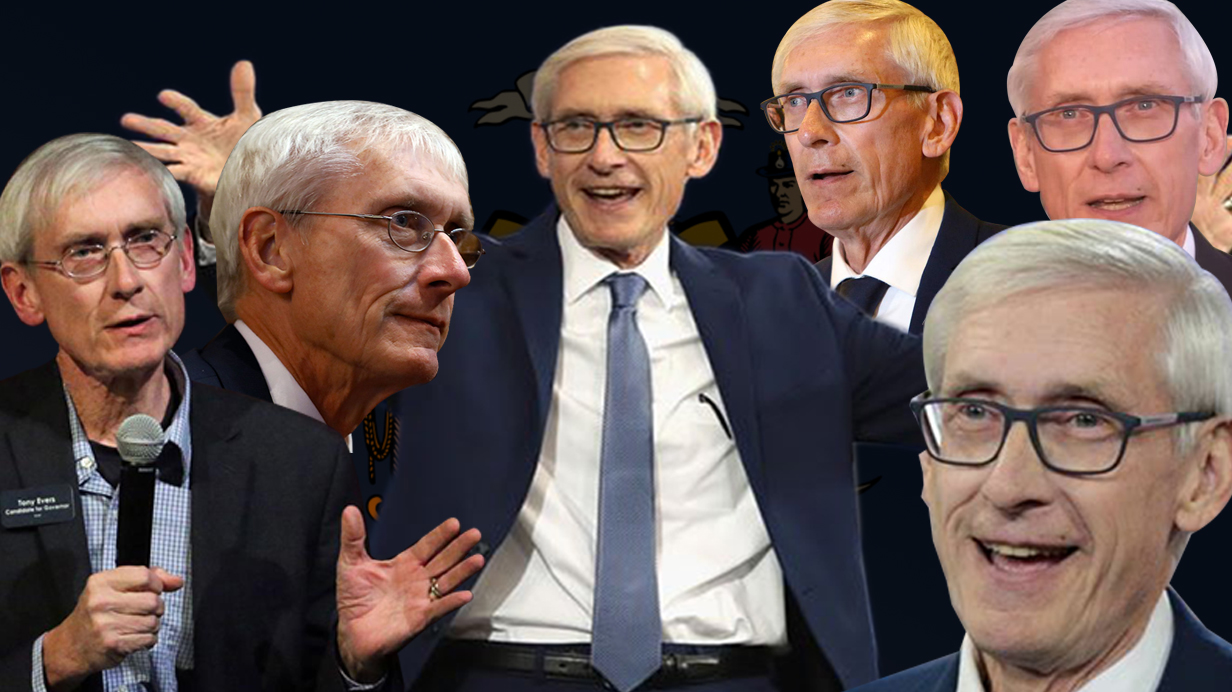 Over the past ten years, Wisconsinites have come to expect a lot from their governor in terms of integrity and consistency. Politifact investigated Gov. Scott Walker almost 200 times during his 8 years in office. It continues to check up on him even today. Walker’s lifetime record with Politifact has 13% of his statements rated “True” and 21% of his statement rated “Mostly True.”

The popular accountability website has some catching up to do with Gov. Tony Evers, who has only been fact checked 4 times during his first year on the job. Only one of those statements was found to be “Half True.” None of them was rated “True” or even “Mostly True.” Incredibly Tony Evers has never made a “True” statement in his life found by Politifact.

With a track record like that, it’s not surprising that the governor frequently made dubious statements in public throughout the year. Somehow, Politifact missed most of these; fortunately, the news cameras did not.

6. Making Up Gas Tax Hikes In Other States

During his budget address Gov. Evers called for a gas tax increase. As part of his justification for a gas tax in Wisconsin, he claimed Minnesota just raised their state gas tax by 20 cents and Ohio raised it by 18 cents. At that time, those were only proposals in those states. Ohio eventually settled on a 10.5 cent gas tax hike and Minnesota rejected any increase at all.

Gov. Evers told his Transportation Stakeholder Task Force that the DOT has a revenue problem and not a spending problem.

He then told reporters that it was the task force that told him the DOT has a revenue problem not a spending problem.

Sometimes objective truth is no match for the governor’s feelings. According to Webster’s Dictionary, “Infanticide” is defined as “the killing of an infant.” According to Gov. Evers, the definition of “Blasphemy” is saying doctors who kill infants commit infanticide.

https://t.co/9qhna3hKdV Gov. Evers’ remarks at the Milwaukee Press Club are getting a lot attention today. Republicans describe killing an infant after a botched abortion as “executing babies.” Evers says that description is “blasphemy.” Evers says he will veto the Republican b… pic.twitter.com/xBouOYilyt

3. “Pretty Much” No Tax Increases in Budget

Gov. Evers told reporters in March that his budget proposal “pretty much” wouldn’t raise taxes, even though it included $1.3 billion in tax hikes.

Evers told reporters on Nov. 11th he would release his emails in compliance with the state’s open records law. Immediately after that, his staff told those reporters that’s not going to happen. Even after WITI-TV sued the governor for those records, his staff released only some of them. And so the lawsuit continues, and Evers remains silent.

1. Doing Time for a Baggie of Weed

At a press conference in the Capitol rotunda on Feb. 19th, Governor Evers said “we’re spending too much money prosecuting and incarcerating people, often people of color, for non-violent crimes related to possessing small amounts of marijuana.”

It turned out first time possession of marijuana is a misdemeanor in Wisocnsin and local government have the authority to determine how to punish possession of small amounts.

First time marijuana possession is a misdemeanor in Wisconsin, and local governments get to decide how to punish possession of small amounts. In Milwaukee and Madison, it’s just a fine. That makes this statement by @Govevers highly questionable at best. #WIright @DanODonnellShow pic.twitter.com/73HsGAyEeb

Even Politifact couldn’t ignore this claim, giving him a “Pants on Fire” rating. That didn’t keep him from continuing that false narrative. On May 1st, he repeated the lie to the Milwaukee press club.

.@GovEvers doubles down on narrative that people are in prison for possessing small amounts of #marijuana. That claim was debunked over two months ago. There are no inmates in state prison merely for having a “baggie of weed.” https://t.co/pmeRva0btX #WIright #WIbudget pic.twitter.com/VgQCcUSQ8b