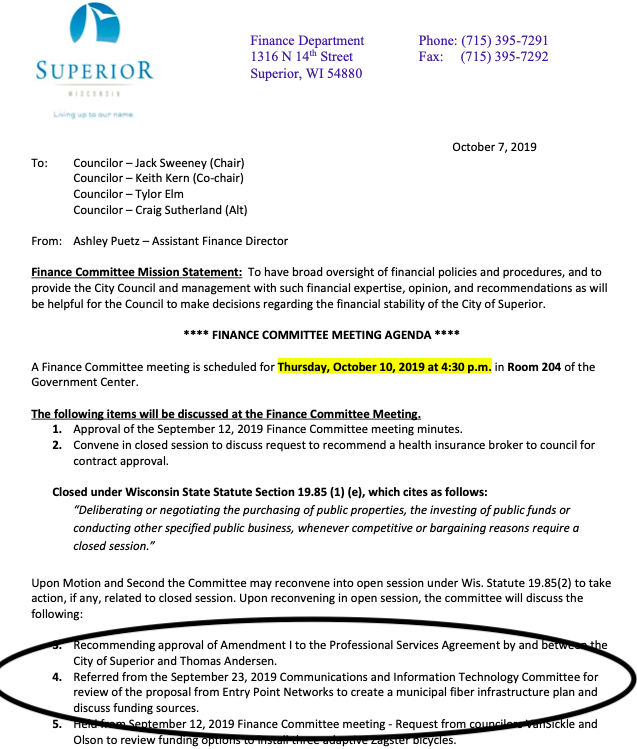 The City of Superior in northwestern Wisconsin is set to vote this week on a proposal from Entry Point Networks, a firm out of Utah, to create a plan to install a government-owned broadband network, paid for by local taxpayers. This push by Superior to build its own municipal fiber infrastructure comes despite plenty of recent examples of local governments wasting hundreds of thousands of dollars on similar projects all across the country – like in the City of Madison.

Madison began its push for a city-wide government-owned fiber network by starting with a small pilot program in 2015. The pilot program was supposed to bring broadband to four low-income neighborhoods and in the process, demonstrate the overwhelming demand for government-provided high-speed internet.

Problem is, the pilot project failed miserably. Despite the fact that the city spent close to $900,000 on the pilot project, just 19 customers out of a total of 979 potential subscribers signed up for the service.

Madisonians decided they did not need their government to build a new network and provide broadband service, will the citizens of Superior agree? Their city officials apparently hope not.

Madison’s full-blown, city-wide broadband network was estimated to cost an astonishing $173 million before the city council decided to put an end to the madness. As if the total cost of the Madison project wasn’t a big enough problem, the anticipated fees coming from customers to pay for the new service were only estimated to cover a third of that cost.

If the customers of the new service don’t actually cover the full cost of the entire project, you can bet all taxpayers will be “asked” to pay the rest.

What will Superior’s network cost? Based on Madison’s experience, Superior property taxpayers should brace themselves for sticker shock.

Entry Point is far from an unbiased expert or neutral observer. It appears from their website that, if Entry Point can convince the taxpayers of Superior and the local city council to pursue this boondoggle, Entry Point will then sell its network management software and other services to the City to help it run the new infrastructure network.

Do you think Entry Point will develop a fair survey to accurately gauge the true wishes of Superior taxpayers? Or do you think they will end up advocating for this incredibly expensive project because they will pick up a new customer if the campaign succeeds?

I’ll bet the survey will ask Superior residents if they would like access to fast, reliable and inexpensive broadband. Who doesn’t want that? While we are at it, let’s ask the good people of Superior if they like puppies and want eternal life? No one is going to answer no.

Reviewing Entry Point’s scope of work proposal, it looks like they are counting on an overwhelmingly positive response to the survey. In fact, it seems Entry Point assumes that taxpayers want to proceed with this massive public works project even before the full city council has had a chance to vote on it.

The detailed plan lists that they will work with the City Attorney to establish a legal authority to operate the broadband infrastructure, develop a 12-month project management plan, prepare a projected monthly network operations fee for residents and businesses and develop recommendations for a funding path of the infrastructure, the operations and maintenance of the network and the service providers.

It sounds like the city council has already decided to approve this boondoggle and they want Entry Point to help them sell it to their residents.

If Madison isn’t enough of a cautionary tale to make Superior taxpayers wary, they should consider the plight of Sun Prairie, Madison’s neighbor.

In 2017, Sun Prairie finally sold its costly fiber system to a private company for $2.88 million, just a bit more than the city’s outstanding debt on its assets, according to the Wisconsin State Journal.

Madison and Sun Prairie are not isolated incidents. There are many more examples of government-owned fiber networks with serious financial problems here in Wisconsin and across the country.

The question is, does the Superior City Council care? Will the City Council look out for Superior taxpayers first and foremost before they commit to what will surely be a massive, expensive and unnecessary public works project? It appears that the council has already made its decision.

We will find out this week. Stay tuned.