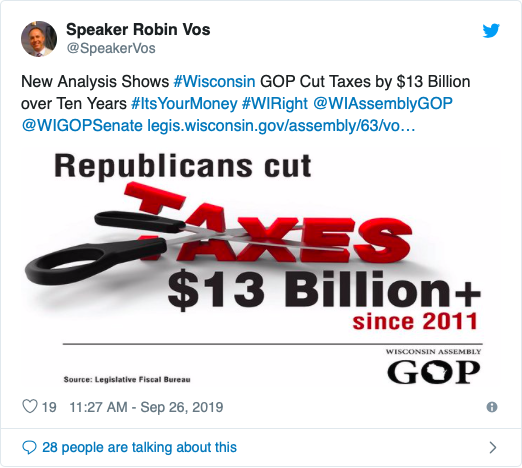 $7.2 billion in income and sale tax cuts, $5.8 billion in property tax cuts, and $131 million in general fund tax cuts total staggering figure – but some of the most sizable tax cuts, such as those stemming from Act 10, aren’t even included in the figure

A new memo from Wisconsin’s nonpartisan Legislative Fiscal Bureau (LFB) shows that Wisconsin taxes have fallen by more than $13.1 billion since 2011.

Just over half, or 55 percent, of the total tax cut comes from income and franchise tax cuts along with economic development surcharges totaling $7.2 billion. Another $5.8 billion in cuts went to property taxes, and general fund taxes have fallen by $131 million.

The LFB memo examines total fiscal effects of tax changes from January 2011 through 2021, when the current budget biennium ends. In income tax cuts alone, the median Wisconsin family will have saved more than $2,000 over the ten year period. 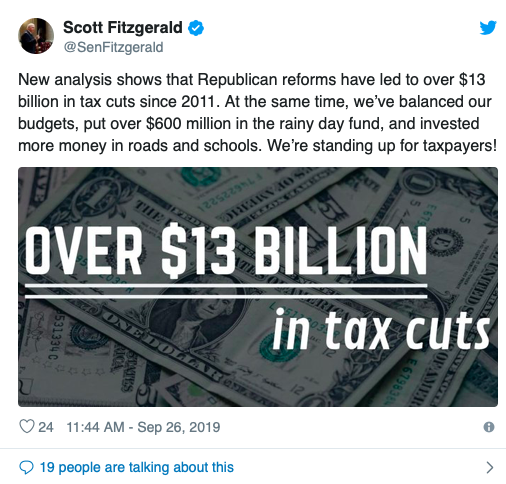 The Republican-led state Legislature has long championed pro-growth tax reform. Legislative leaders celebrated the news on social media, noting that they have also increased the rainy day fund to more than $600 million, have balanced the budget, and sent more funding to schools.

As impressive as the $13 billion figure is, many of the state’s most notable changes aren’t included in the count.

Increased sales tax revenues allowed through the South Dakota v. Wayfair case will reduce individual income tax rates for every taxpayer in the state, beginning in July 2020. Lawmakers finalized those rate reductions in the 2019-21 state budget.

In 2020, the lowest individual income tax rate will fall to approximately 3.76 percent from the current 4.0 percent. Regardless of total earning, every Wisconsin taxpayer will reap those benefits. The average Wisconsinite will see a $91 income tax cut in 2019 and another $124 cut in 2020. Those earning between $30,000 and $60,000 will see the biggest benefit.

Wisconsin’s total personal income is on the rise which has led our overall tax burden to fall to its lowest level in 50 years.

Back in 2011, the Tax Foundation ranked Wisconsin as one of the top ten worst taxed states in the country. Today, our rank has dropped all the way to #32.

Wisconsin is one of 22 states considered to be in a strong position to weather the effects of recession, according to a recent analysis by Moody’s Investor Services. In 2017, Moody’s upgraded Wisconsin’s state credit rating for the first time since 1973.

At the time, then-Gov. Scott Walker said the improvement reflected the “fiscal stability driven by bold reforms and accountable stewardship of the taxpayer dollars.” When Walker entered office in 2011, the state was facing a $3.6 billion budget shortfall.

The MacIver Institute has released its own plan for continuing the state’s progress on tax reform and growth: A Glide Path to a 3 Percent Flat Income Tax. A flat 3 percent individual income tax would be a tax cut for everyone in Wisconsin, significantly impacting the income of all Wisconsinites and allowing working-class people to keep more of their income. 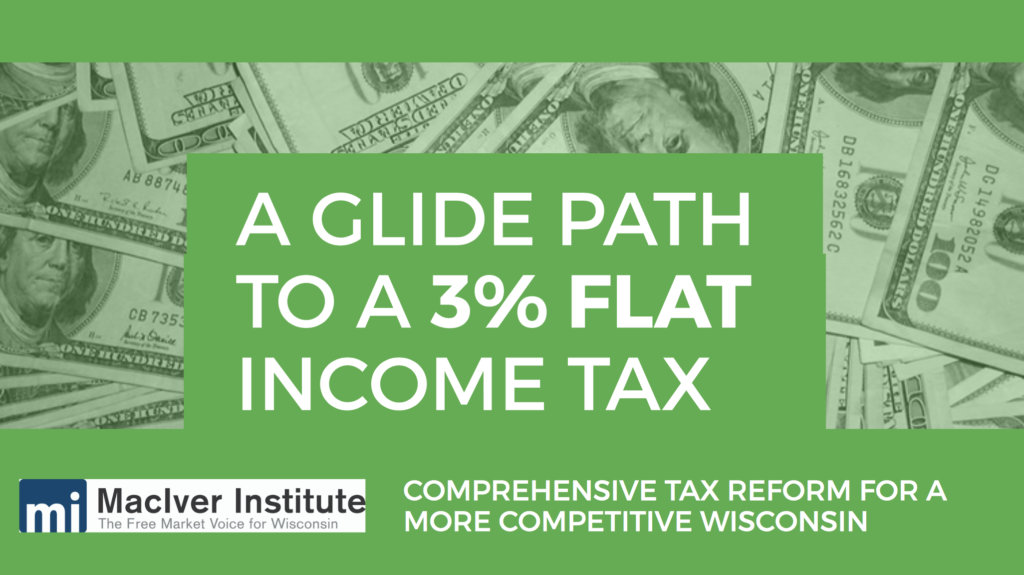