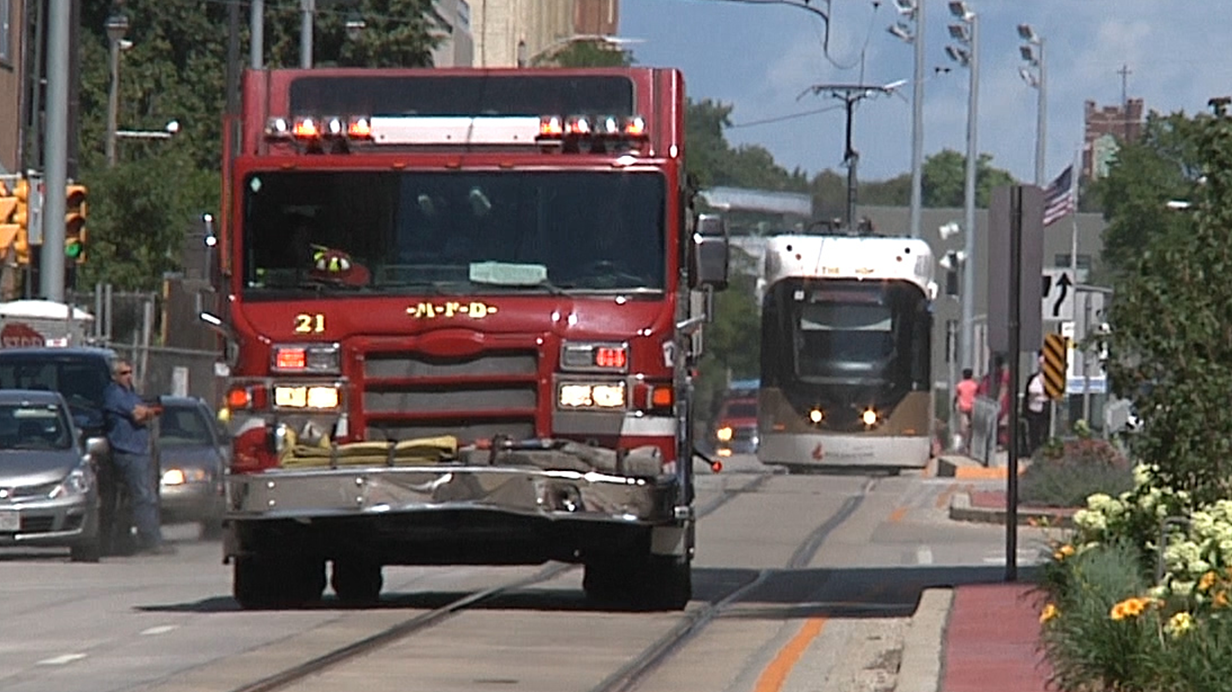 Say, that’s a real nice police department you got there.  Real nice.  You know, it’d be a real shame if something happened to it.

Like what?  Oh, I don’t know.  You just never know when positions might be eliminated or things like that.  But that doesn’t have to happen.  Just give us more money by letting us raise your taxes and that nice police department you got will be just fine.

Milwaukee Mayor Tom Barrett is sounding an awful lot like The Godfather’s Tom Hagen these days as he tries to pressure both the State Legislature and Milwaukee County voters to approve a sales tax increase next spring.

If a government—at any level—wants to raise taxes, it threatens to cut the most vital services and positions (such as firefighters) first.

“If this does not happen, there will be even more cuts to the Milwaukee Police Department next year, which is something that I am trying to avoid,” he told members of the Intergovernmental Cooperation Council.

And, of course, nothing screams “intergovernmental cooperation” quite like Mafia-style threats.

In order for city and county leaders to get the one percent sales tax increase they so desperately want; the Legislature must pass a bill allowing Milwaukee County to put a binding referendum to voters.  Naturally, Republicans who control both the State Assembly and Senate are resistant, but are also deeply concerned about Barrett’s planned cuts to police, especially after his most recent city budget eliminates 60 positions.

“My response, essentially, is if you work with me, I can avoid this,” he answered. “This is something I’m trying to avoid.”

Like he said, he doesn’t want to hurt that nice police department of yours, but if you don’t give him his money, he doesn’t have a choice.

This rather noxious form of governmental extortion is part of a well-known strategy known as “firefighters first.”  If a government—at any level—wants to raise taxes, it threatens to cut the most vital services and positions (such as firefighters) first.

When facing a budget crunch (invariably of its own making), a local school board will never, say, threaten to cut its district’s five assistant superintendents, seven vice principals, and 13 curriculum coordinators; it will threaten to cut the art program.

The idea is to get the public far too scared to vote against the tax increase.  It’s a form of blackmail, and it’s highly effective. School referenda pass regularly because communities are worried that the football team really might not play next season.

Barrett, acting less as Milwaukee’s mayor and more as its caporegime, has taken this strategy to a disturbing new depth by actually cutting 60 police positions the city budget he released last month.

Needless to say, Milwaukee is not a city that can afford to lose three percent of its police force. Its crime problem is so out-of-control that Milwaukee now accounts for 51.3% of Wisconsin’s violent crimes and 58.4% of its homicides even though it makes up just 10% of the state’s population.

By threatening even more police cuts unless he gets his sales tax increase, Barrett is quite literally demanding protection money.

And while he claims that he just doesn’t have the money to pay for police officers, the Milwaukee Common Council is in the process of giving final approval to $9 million in loans for a boutique hotel in the inner city that Milwaukee’s comptroller said posed a “significant risk” to taxpayers.

The developer, a politically-connected Democrat, is also a habitual deadbeat.  Just two years ago, his wages were garnished after a judgement to pay a debt owed to…the City of Milwaukee.

Yet somehow that same city can’t afford to pay 60 police officers?  If it didn’t make $9 million in ridiculous loans, it could pay them each $150,000.

If it wasn’t scrambling to find $1.5 million per year to operate Barrett’s pet streetcar, Milwaukee might be able to protect its citizens without extorting them first.

Barrett, like every government official who employs the “firefighters first” strategy, is smart enough to know that cancelling a $9 million loan to a political crony and admitting defeat and suspending operations on his ridiculous trolley to divert more funds to the Milwaukee Police Department would be wildly popular.

It’s precisely why he would never do it.

In order to secure more public money for government’s pet projects, the public must first believe that government will deprive them of some necessary or extremely popular service. And every government official worth his or her inflated pension knows it.

Need a referendum passed? Threaten to cut the math department.  Need a tax increase?  Start taking cops off of the most dangerous streets in the state.  The people will beg to pay more.

After all, it’s a real nice city they’ve got there.  It’d be a shame if something happened to it.