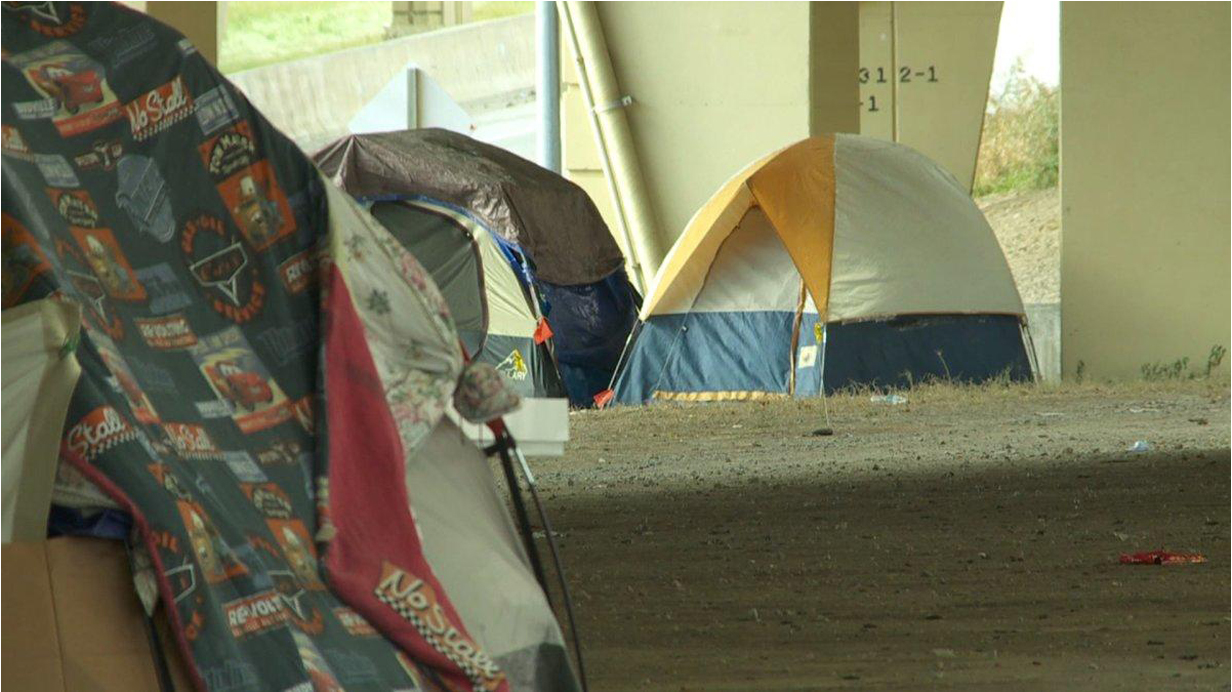 .@DanODonnellShow reports, Governor Evers and Milwaukee Mayor Tom Barrett could have shut down “Tent City” any time they wanted to. So why are they only just now doing it? #WIright #WIpolitics Click To Tweet

After six months of apparent indifference to the steadily growing number of homeless people living on its land, the Wisconsin Department of Transportation on Friday posted notice that it intended to clear out the state-owned land underneath I-794 near the Marquette Interchange that has become known as Milwaukee’s “Tent City.”

“You are hereby given notice to move off the Wisconsin Department of Transportation right of way per Wisconsin State Statute 86.025 which states that camping on highways is unlawful,” the notice reads. “As of the date you received and or this notice was posted you have until October 31, 2019 to gather and remove your property.”

The statute expressly makes it “unlawful for any person or persons to camp in wagons, tents or otherwise on the public highways or lands adjacent thereto, after a notice to remove therefrom by the owners of such adjacent lands, or the owner of land abutting on the highway, or by a member of the board of supervisors or any trustee of any town or village where such camping place is made.” Anyone found in violation of this law “shall be fined not exceeding $10, or imprisoned in the county jail not exceeding 30 days, or both.”

So why is this only now being enforced?  Why did the Evers Administration finally decide that it was time to literally pack up the tents?

Each April for the past few years, several dozen homeless people have been using the highway overpass as a natural shelter from the elements and have been living in crime-infested, alcohol and drug-fueled squalor.  This summer, their number swelled to well more than a hundred.

At any moment, the state—as the owner of the land “adjacent [to] th

e public highways”—could have posted a notice to vacate the area.  Why didn’t it?  Why did it allow Tent City to not just exist, but thrive and grow?  Why did it allow the prostitution, property and violent crime, and rampant drug dealing and abuse to continue unabated for half a year?

Why didn’t a “member of the board of supervisors or any trustee” of the City of Milwaukee post a notice to vacate?  The Milwaukee Police Department was reporting near-constant problems at Tent City, but the city’s leadership still refused to act.  Why?

Why did it instead authorize weekly trash collection from the site and allow the Hunger Task Force to place Port-A-Johns there? Why did it allow food deliveries from groups like StreetLife Communities and Feeding His Flock?  Why did it allow the donation of tents from private groups like Street Angels?  Why, in other words, did it seem to do everything in its power to make Tent City as comfortable a campsite as possible?

The only possible answer is that both the City of Milwaukee and the State of Wisconsin wanted Tent City there.

Seemingly operating on the misguided notion that camping on public land is compassionate toward those who don’t want to live in shelters or seek treatment for their addictions and/or serious mental health issues, both Milwaukee Mayor Tom Barrett and Wisconsin Governor Tony Evers chose to ignore state law, common sense, and the overwhelming desire of Milwaukeeans to clean up what had grown into one of the biggest public health hazards in the city.

Only now, as the approaching winter begins to naturally clear out homeless encampments across the northern part of the country, have they taken the action that they could have at any point for the past six months.

In what is very clearly not a coincidence, the City of Milwaukee has announced plans to turn the state land on which Tent City now sits into a “community green space” by next summer.

A deeper problem, though, is the broader policy of benign neglect that allows homeless camps to spring up in the first place; the mistaken assumptions that life on the streets is somehow acceptable and that it is the role of government to make this life as bearable as possible.

An uncomfortable reality is that massive numbers of homeless people are suffering from severe alcohol and/or drug addictions that make life in largely drug- and alcohol-free shelters impossible.  Making it easier for them to continue to use while living in Tent City is a massive barrier to treatment and eventual re-entry into society.

“The tents can, for some individuals, remove their incentive to seek temporary shelter and longer-term housing options. In the short term, a tent offers an easier solution that comes with no rules, curfews, applications, etc.,” homeless advocate Faith Kohler told The Milwaukee Journal Sentinelin June. The food deliveries eliminate the incentive for people to go to nearby meal sites that serve the homeless community.

“In addition to providing shelter and food, these locations refer individuals into the continuum-of-care coordinated entry process. Tent and food deliveries don’t.”

True compassion, then, is an immediate move to force the homeless off of the street and into safer living conditions where they might actually be able to transition back into sobriety, mental health, employment, and a permanent home.

As one Tent City resident told FOX 6 after the state’s eviction notice was posted, “I’m probably just going to go through staffing partners, get a job, [and] stay at a shelter temporarily before I can get on my feet.”