Sec. Craig Thompson has been running the DOT since Jan., and in those 8 months has approved $320M worth of single-bid contracts. That’s just $12M shy of what his predecessor approved in 2 years. #wiright #wipolitics Click To Tweet

MADISON – Single-bid contracts have been a lightning rod at the Wisconsin Department of Transportation ever since the Legislative Audit Bureau identified it as a major source of fiscal waste at the agency two years ago.

Any progress the DOT made in getting that problem under control came to a screeching halt with Gov. Tony Evers’ appointment of Craig Thompson as the agency’s new secretary-designee.

Secretary-Designee Craig Thompson has been running the DOT since January, and in those 8 months has approved $320 million worth of single-bid contracts. That’s just $12 million shy of what Secretary Dave Ross approved during his two years in charge.

During his first 8 months on the job, Craig Thompson approved 60 single-bid contracts worth over $320 million.

Thompson hadn’t even been on the job a week, before he signed off on two single-bid contracts totaling $1.7 million.

In order to take the job as DOT Secretary, Thompson first had to quit his job at the Transportation Development Association, where he had been the executive director and sole lobbyist for the past ten years. When he took over, the DOT was on a search and destroy mission to eliminate waste, fraud and abuse.

That began when Sec. Mark Gottlieb resigned in disgrace after a 2017 legislative audit found the department had squandered billions of taxpayer dollars due to systematic failures throughout the organization. Among many other problems, the Legislative Audit Bureau found the DOT could have saved $44.7 million over a ten-year period if it stopped awarding single-bid contracts.

To help make the bidding process more competitive, the Audit Bureau recommended the DOT start following its own policies for soliciting bids. One of those policies sets quarterly goals throughout the year for the number of projects it puts out to bid. By doing that, the road builders would have to compete with one another for projects instead of projects competing for road builders – a situation that drives up project costs.

Despite a package of reform bills designed to implement the audit’s recommendations, the problem of single-bid contracts persisted. That’s why this session lawmakers introduced a new bill to get them under control. It would require the DOT to rebid projects that attract only a single bid that comes in over 10 percent higher than the DOT’s internal estimates. The assembly passed it in June, but it’s been waiting in the committee on Senate Organization ever since. 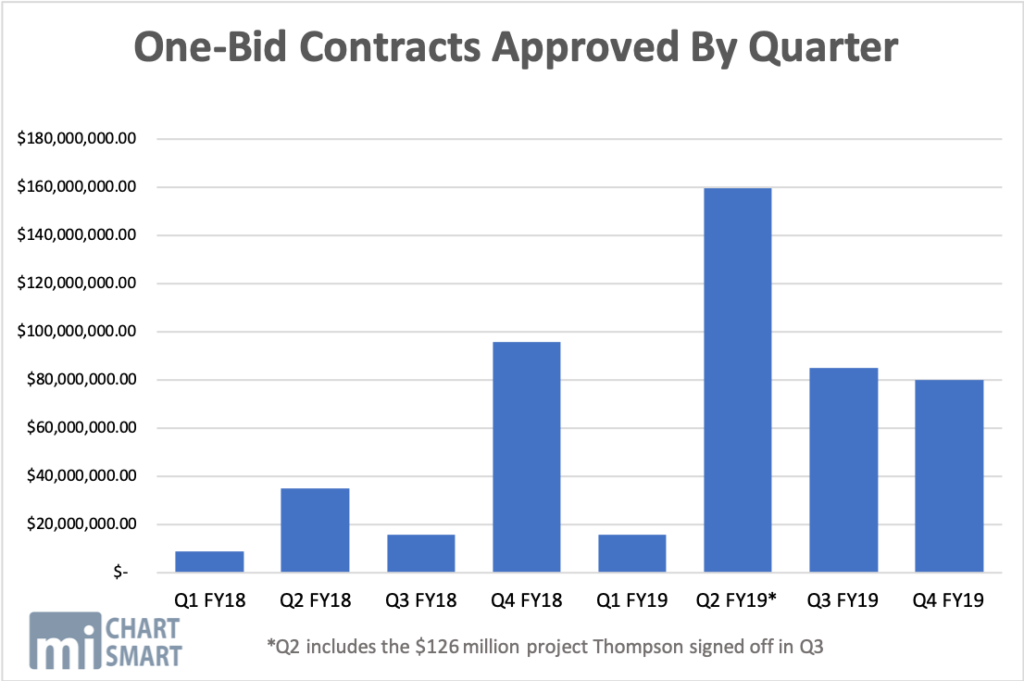 That bill is a direct result of the I-39/90 expansion project, which received a single bid of $126 million. That was 20 percent higher than the DOT expected. Thompson approved it on Mar. 1st, claiming the DOT’s engineers screwed up their original cost projections. It was one of 60 single-bid contracts he has signed off on so far.

When the MacIver Institute requested that information for a number of projects from last year, the DOT responded as if those contracts had not yet been awarded even though that was not the case.

“This information, if released, will undermine the state’s ability to manage its public bid process. The department is required to take bids, which result in work being performed at the lowest bid from a responsible bidder. The public relies on the state’s management of this process in order to protect the public from unreasonable projects costs and to prevent bid rigging.  Disclosure of confidential department estimates would disrupt the bid process by allowing bidders to adjust their bids to fit the estimate instead of relying on market competition,” Kristin McHugh, DOT’s Public Affairs Director, wrote in her response denying the request.

By not releasing that information, the DOT can effectively hide how much money taxpayers could save if the department stopped awarding single-bid contracts. It also means there is no way for anyone outside the agency to know if it is meeting its quarterly bid solicitation goals.

This secrecy has been typical of the Evers administration, which routinely slow walks requests made under the state’s open records law. Its resistance to implement reforms in the DOT is also no surprise.

During his first month in office, Gov. Evers created a “Transportation Stakeholder Task Force.” It met twice to discuss ways to increase funding to the DOT. Cost efficiencies and agency reforms were not big talking points.

“We should raise the gas tax by five-and-a-half cents,” Curt Witynski of the Leagure of Wisconsin Municipalities advocated at one meeting. “But we also thought we should have a number of options out there on the table to discuss as far as revenue increases. We also supported reestablishing the gas tax indexing and increasing the increasing the registration fee by $25.”

The final state budget did not include that gas tax or indexing, but it did raise the registration fee. It also included one transportation reform called design-build. That will allow road builders to work with the DOT during the design phase of projects to identify potential cost efficiencies before the plans are set in stone. Unfortunately, DOT isn’t satisfied. Thompson told Wisconsin Eye that he still wants to raise the gas tax. Meanwhile, his record on one-bid contracts demonstrates his reluctance to look for cost savings that might come at the expense of his former clients.

Those will likely be topics of conversation on Thursday. That’s when the Senate Committee on Transportation, Veterans and Military Affairs will decide whether or not to make Thompson officially the DOT Secretary.