MADISON – Wisconsin governors might have the most powerful veto pen in the country, but it’s much more useful to conservatives than liberals. The pen can only take things out of the budget and reduce spending. It cannot create new items nor increase spending, at least technically.

And so, when the Republican Legislature presented Gov. Evers with their $81.4 billion budget on Friday, there was nothing Evers could do to get it back to the $84.2 billion he wanted to spend. However, he certainly was not going to sign the Republicans’ budget without making some changes. Here’s what Evers did and did not do in his 78 line-item vetoes. 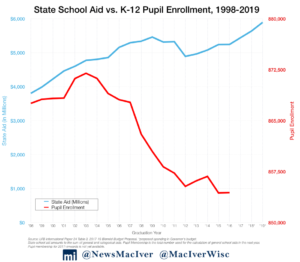 .⁦@SenatorKapenga⁩ explained in a press conference minutes ago why he now a firm yes vote on the budget. #wipolitics #wibudget pic.twitter.com/qkzTcKnzPS