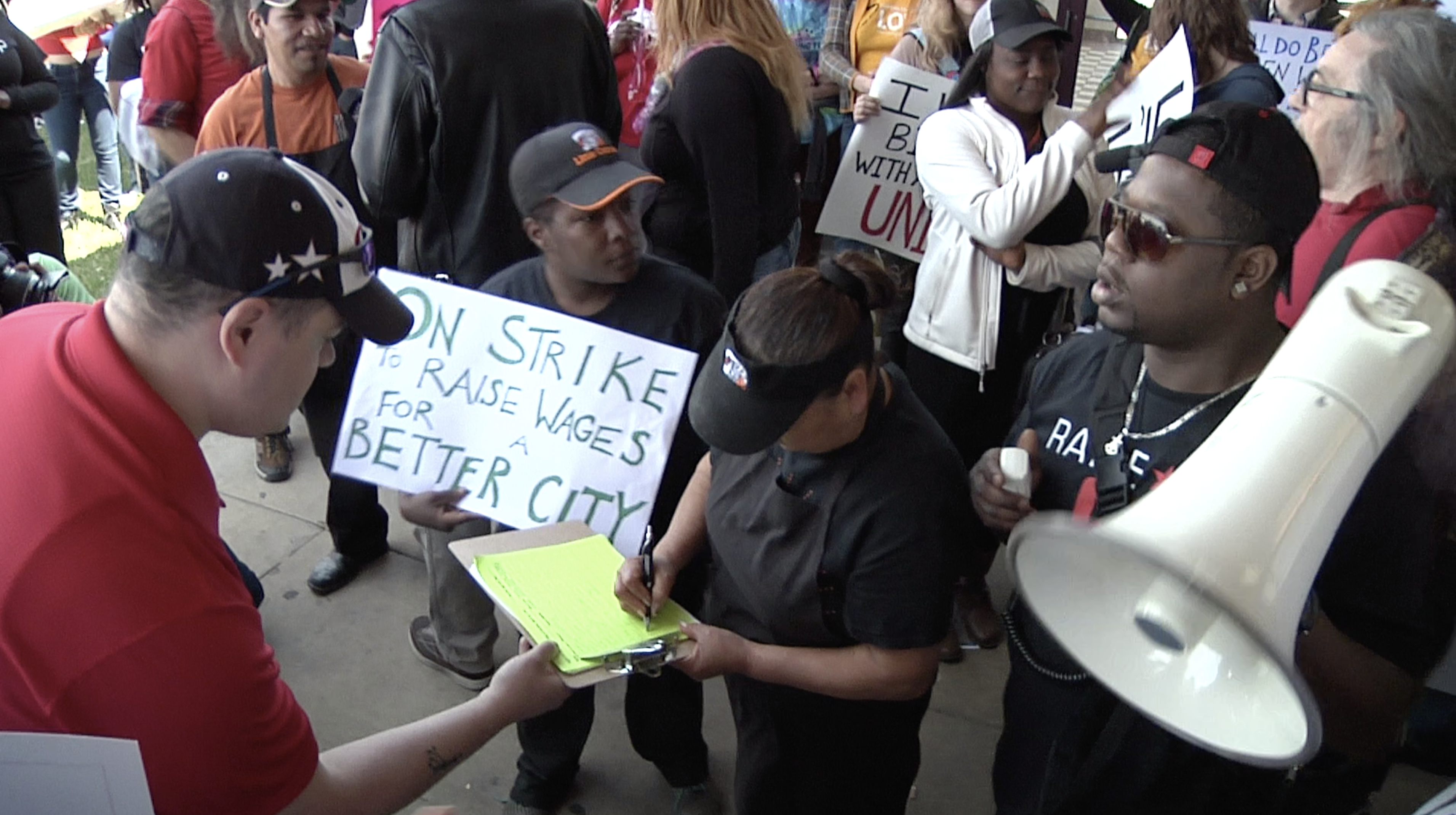 Last week, the House of Representatives passed a $15 an hour minimum wage with the “Raise The Wage Act.” It would more than double the current minimum of $7.25 an hour. This policy disregards simple economics, is filled with negative unintended consequences, and hurts the very people that it claims to help.

Low-wage workers who are jobless because of a minimum-wage increase cannot acquire skills through formal on-the-job training or informal learning by doing. Reductions in training might occur even among employed workers if firms cut their spending on training to offset their higher payroll expenses.

A higher minimum wage kills jobs. There is no way around it. Businesses are not greedy, horrible entities – they are rational decision makers. Market-set wages match workers’ skillsets with the value of their labor. Alternatively, Government-set wages attempt to artificially decide the value of workers’ labor. A recent Congressional Budget Office (CBO) report showed a mountain of evidence against a $15 per hour minimum wage. Still, the House passed the legislation.

Businesses cannot afford an increase on the cost of labor without offsetting increased costs elsewhere. Unfortunately, employees are the first to suffer the consequences, since the cost of labor is necessarily increased with a higher minimum wage. A pocket of D.C. politicians mandating how every business in the country should pay their employees has detrimental results backed by the facts. The CBO found that if the minimum wage was forcibly raised to $15 an hour, an estimated 1.3 million hard working citizens would lose their jobs. This number could shoot even higher, possibly reaching 3.7 million.

What type of people would be affected by a mandated higher minimum wage? For starters, 600,000 teenagers would likely be out of a job, according to the CBO. An entry-level job rewards them with much-needed cash, but much more importantly, invaluable work experience. With over 7 million jobs available in the country, a high minimum wage hurts teenagers on the first rung of the ladder looking to ascend. They will not be able to fill one of those 7 million jobs if they can’t find an entry-level, minimum wage job to start their work journey. If a business is forced by the government to pay more than double what they can afford, there’s only one sensible option for those businesses: find the best value for that cost.

That’s why the entry point of a career, any career, becomes increasingly difficult to find with a higher minimum wage. Minimum wage jobs offer the first step in a career and upward mobility. Life becomes astronomically more difficult for those at the bottom to find stability if they cannot find an entry-level job or if their employer can’t afford to hold onto them. The employee now cannot develop or look to rise in the workforce.

According to the CBO report, “Low-wage workers who are jobless because of a minimum-wage increase cannot acquire skills through formal on-the-job training or informal learning by doing. Reductions in training might occur even among employed workers if firms cut their spending on training to offset their higher payroll expenses.” 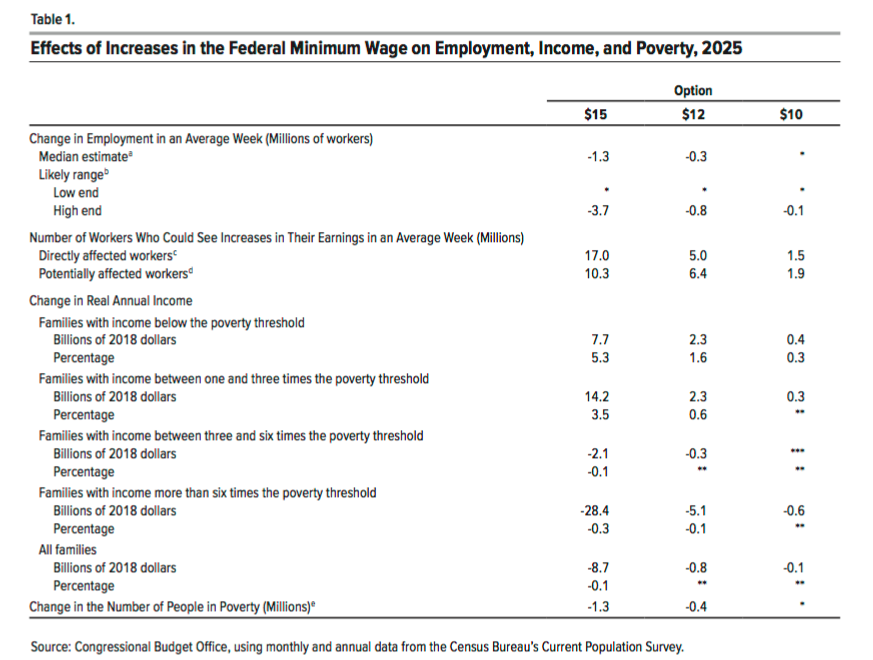 With a higher minimum wage, those already down on their luck will struggle even more since low-skill jobs will disappear. The part-time hours people depend on to make ends meet will be offered less and less. A strong barrier of entry will form for those who need to get back on track with their career the most.

The Consumer Pays The Price, Literally, And If They Won’t Pay Higher Prices, Businesses Will Die

As the cost of labor shoots up, businesses will be left scrambling to make ends meet to stay profitable. The CBO reports, “business owners would be able to pass a substantial and, over time, increasing share of those cost increases on to consumers in the form of higher prices.”

This could easily set off a chain reaction throughout the economy. Can you, the consumer, really afford to see prices you depend on to go up? With this governmental wage manipulation, real family income decreases by $9 billion or 0.1 percent according to the CBO. If costs rise without any rise in true added value, consumption will naturally decrease. All individual action is self-interested, so if there is an additional cost, but no increase in value, consumption will decrease. If people consume less, then businesses sell less product, make less money, and struggle to survive. The small businesses and “mom and pop” shops cannot stay afloat with increased labor costs forcing prices to rise. They will lose their small customer base because their product cannot survive with the big box stores. The result: a shrinking economy.

When You’re Forced To Overpay For Labor, You Replace It With Automation

When businesses are forced by the government to raise wages and the labor is expendable, businesses innovate to save money. Low-skilled workers are the ones who will be substituted for first –  just look to the fast food industry. For example, a cashier at typical fast food restaurant provides a value of roughly around $8 – $10 per hour to the businesses. If the wage is required by law to be $15 per hour, restaurants face an easy business decision. The franchises will survive by installing the new kiosks around the country to do the work of a low-skilled laborer. For example, McDonald’s plans to install kiosks in all their stores by 2020. The cold, hard reality is that worker does not provide $15 per hour of value to their bottom line.

Not Sold On The CBO Report? Just Take A Look At  Seattle

The University of Washington recently completed a study on Seattle’s gradual increase to a $15 per hour wage. These alarming results were recorded when the minimum reached $13 per hour. The study finds hours worked by low-wage workers initially decreased by 9.4 percent. Even though wages increased by 3 percent, overall total payroll fell. Low-wage workers were projected to lose on average $125 a month with the new policy. The poor ended up poorer. In terms of employment, the study projects that there will be more employment lost than gained at the lowest levels. So far, Seattle has destroyed about 5,000 jobs.

The Market is Already Raising Wages On its Own

Of all hourly workers, BLS reports that only 2.1 percent were paid at or below the federal minimum wage in 2018. In 2010, this number stood at 6 percent and has dropped every year since. Fast food workers received an average wage of $10.64 per hour, almost 50 percent higher than the $7.25 hourly federal minimum. The market did not need to be ordered by the government to raise wages, it’s increasing naturally. The “Fight for $15” movement pushes the idea that fast food work does not pay nearly enough. In reality, wages are actually rising and fewer people are working the federal minimum each year. That might not be fast enough for some politicians, but evidence shows this natural growth can’t be rushed without dire consequences. 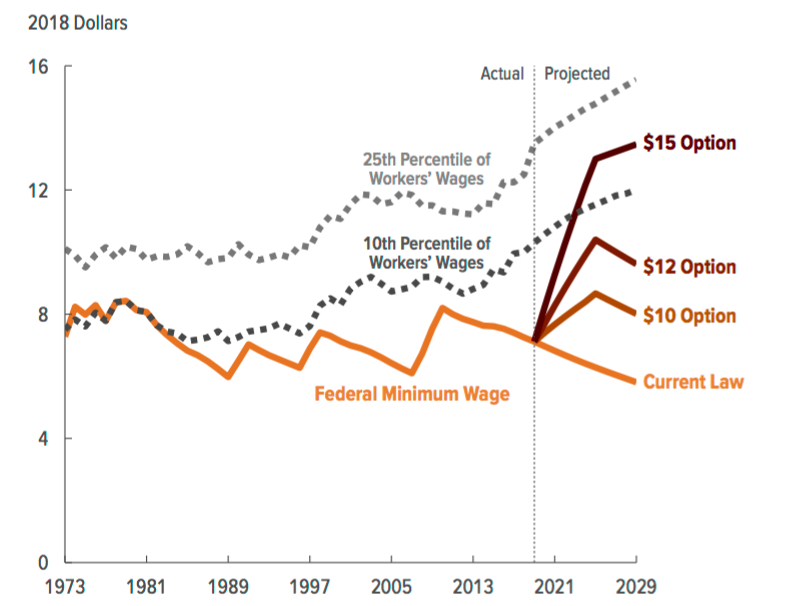 Politicians who ignore the facts should not force businesses to pay their workers based on their political motives. The best policy is not a destructive federal mandate from Washington, but to allow the free market to dictate the value of labor. The reality shows clear evidence of natural wage adjustment and upward mobility by letting businesses set their own costs.