Next week, the Legislature is slated to vote on the 2019-21 #wibudget. That means there's still time to make the spending plan more taxpayer friendly - here are 10 ideas to make the budget better before it goes to @GovEvers. Click To Tweet

As the Legislature prepares to vote, it still has options.

MADISON, Wis. —Though the summer solstice has yet to arrive, a few telltale signs of summer are already here: the kids are out of school, the sailboats are out on the water, and the Wisconsin Legislature is preparing to vote on a state budget.

Last week, the Joint Finance Committee (JFC) completed its work on the 2019-21 biennial budget, originally proposed by Democratic Gov. Tony Evers in February. The Assembly and Senate will vote on the document by the end of the month. While we’re all ready to swap our business suits for swim suits, Wisconsinites are relying on the Legislature to pass a responsible, taxpayer-friendly document. The following 10 ideas would improve the JFC budget.

The government shouldn’t be putting more expenditures on its credit card. Wisconsin has a strong economy that has led to impressive surplus revenue. If there is a need to increase spending, the state should pay for it directly and not increase borrowing.

2. Get rid of the mileage monitoring study.

This is a Big Brother idea that should frighten every taxpayer. No one needs big government monitoring every mile they drive, every turn they make, like a big brother riding shotgun. This is the type of heavy-handed government oversight we don’t need or want. To make matters worse, the provision would allow the JFC, rather than the full Legislature, to approve this future taxing plan. That’s taxation without representation, and the entire Legislature should have to vote on an issue like this. And another thing – DOT has spent millions of dollars on various studies in the last 10 years. The audit told us what we need to know. Let’s stop wasting money on studies and implement real changes.

The Legislature is clearly hell-bent on giving the DOT more money to “just fix it.” If lawmakers are determined to give DOT more of our hard-earned cash, they should couple the funding increase with simple ideas to make each project more accountable and cost-effective. Better data reporting is one option. Local governments should report how much road work they perform each year and how much money they spend doing it. Design-build contracts would also be a great start, and a pilot program is already included in the DOT package. Unfortunately, the pilot is limited to six projects, at $250 million total, to be completed by the end of 2025. The 2017 DOT audit recommended design-build contracts – so let’s go ahead and use them to their fullest ability rather than limiting them. The Legislature should consider pulling out the “pilot” part of this provision. The state’s gas tax could also be required to go only toward road construction or maintenance projects, to ensure it isn’t wasted on cosmetic changes or other costs only remotely related to actual road construction. Oversight of single-bid projects is also clearly needed. Since Craig Thompson was named DOT secretary-designee, the state has awarded 58 single-bid contracts worth $309 million.

How To Improve Transportation Without Revenue Raisers

Oversight of single-bid projects is also clearly needed. Since Craig Thompson took over as DOT Secretary, the state has awarded 58 single-bid contracts worth $309 million. #wibudget Click To Tweet

This budget continues authorizing the Warren-Knowles Gaylord Stewardship Program through 2022, with spending allotments of $33 million per year, plus another $42.6 million in bonding authority. Total bonding authority is already over $1 billion. In 2019, the state has spent $81 million repaying debt for this public land grab. The program, which began in 1999, was originally authorized for 10 years, but is regularly renewed. We simply don’t need an expensive government program that buys and holds land while paying for it with a credit card.

A biennial budget isn’t where the state should hand out pet projects for different lawmakers. The Republican-controlled Joint Finance Committee budget, subject to approval by the full Legislature and the governor, includes $2 million to replace an underwater electric line to Washington Island. The earmark was requested by Sen. Andre Jacque (R-DePere)  and Rep. Joel Kitchens (R-Sturgeon Bay), and it forces state taxpayers to bail out a local electric cooperative.  The city of Kaukauna, home of Assembly Majority Leader Jim Steineke,  is poised to receive more than $1 million in a matching local bridge assistance program grant in 2019-20. Kaukauna Mayor Tony Penterman in a statement said a U.S. Coast Guard’s order demanding the lift bridge be operational by May 2021 put “local taxpayers on the hook for a hefty bill.” Now, state taxpayers are on the hook for Kaukauna’s old bridge. Marinette Marine, in Rep. John Nygren’s Assembly district, stands to receive $1 million, approved by the Finance Committee Nygren co-chairs. And the JFC budget includes $1 million for renovations to the Campground Shower Building at Yellowstone State Park in Lafayette County, in the district of Sen. Howard Marklein (R-Spring Green), also a JFC member.

Right now, entities like the University of Wisconsin System drive the process of setting prices for new buildings, submitting their own budgets and requests. There’s little to no oversight of the first ask and there is no incentive to keep costs low. In this case, taxpayers pay for state employees to lobby the state itself to ask for more taxpayer money. It’s tantamount to giving the System a blank check. We will never get cost-effective solutions under a process like this.

7. Get the government out of broadband.

This budget spends $44 million in federal dollars for broadband access grants. Broadband access is a robust industry with plenty of market players and plenty of private sector-led options. A competitive industry like this one doesn’t need state interference. Where the government enters, it will never, ever leave.

The budget is partially built on $137 million in new revenue that several dozen more auditors are expected to find. These are new government employees that will shake down small business owners. Those auditors should spend time auditing the government itself – we know how much waste was found in the DOT audit alone. Every last agency should be treated the same way.

The economy is strong now, but a slowdown is inevitable. If we’re spending all this money, we need to make sure we aren’t put in a serious budget hole the next time we face a downturn. There’s a big spender in the East Wing now, and we shouldn’t be surprised to find that any new money the government gets will be spent faster than ever. Evers can’t do anything to the Budget Stabilization  or “rainy day” fund without legislative approval, so it would be a safe place to put surplus revenue.

10. Cut spending wherever you can.

JFC stripped approximately $5 billion in new spending proposed by Evers. That’s good news for taxpayers … until you realize it means JFC approved close to $2 billion in new spending. Very little of the new spending – such as the half-billion dollar increase to education – comes with oversight or accountability. Conservatives have said they want to pass a budget they can be proud of. In this light, it’s important to think back to the Walker years. The Republican’s first budget, for 2011-13, spent $64 billion across all funds. His last budget, for 2017-19, tipped the scales at $76 billion. Even with a conservative in office, government spending continually grew. That’s why it’s up to the conservatives in the state Capitol to keep holding the line.

Even with conservative Gov. @ScottWalker in office, government spending continually grew. That’s why it’s up to the conservatives in the state Capitol to keep holding the line. #wibudget Click To Tweet 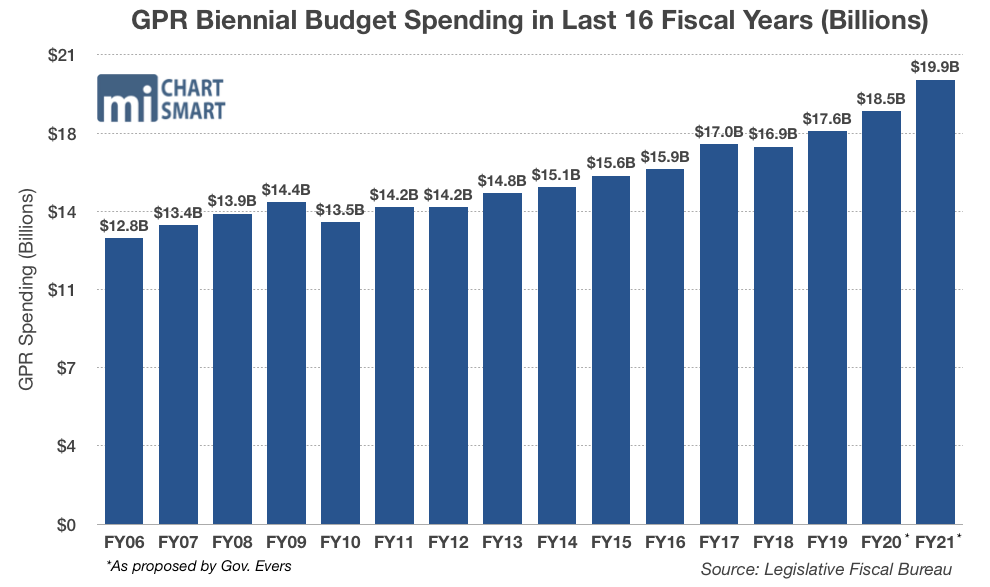