The massive spending plan is built like a house of cards, with “free” federal Medicaid money as its wobbly foundation.

The Republican-led budget-writing committee voted 11-to-4 to remove 131 “non-fiscal” policy items from the Democratic governor’s $84.2 billion biennial budget proposal, including his plan to expand Medicaid in Wisconsin.

The Dems’ plan seems simple enough: Using Medicaid funding from a federal government drowning in $22 trillion of debt to pay for Evers’ budget that is estimated to create a $2 billion structural deficit. #wiright #wipolitics #wibudget Click To Tweet

A Legislative Fiscal Bureau analysis estimates extending the low-income poverty eligibility limits would reduce state Medicaid expenditures by $279.4 million over the life of the 2019-21 budget. Federal funding would increase by $792.6 million over the biennium. And Democrats need every penny to sustain the 8.9 percent increase in all-funds spending on the buffet of liberal spending initiatives Evers has proposed.

“You are betting the farm on one budget item. If anything goes wrong, you have a serious budget problem,” said Sen. Tom Tiffany (R-Minocqua).

"You are betting the farm on one budget item, if anything goes wrong you have a serious budget problem." @SenTomTiffany on Democrats' claim Evers budget depends on taking Medicaid expansion. #wiright #wipolitics

The Democrats’ plan seems simple enough: Using Medicaid funding from a federal government drowning in $22 trillion of debt to pay for Evers’ budget that is estimated to create a $2 billion structural deficit.

But it’s free money, the Democrats insist. It’s “our money” just sitting in Washington, D.C., they say, and Republican lawmakers and former Republican Gov. Scott Walker cost the state more than $1 billion by rejecting the federal cash over the past five years. 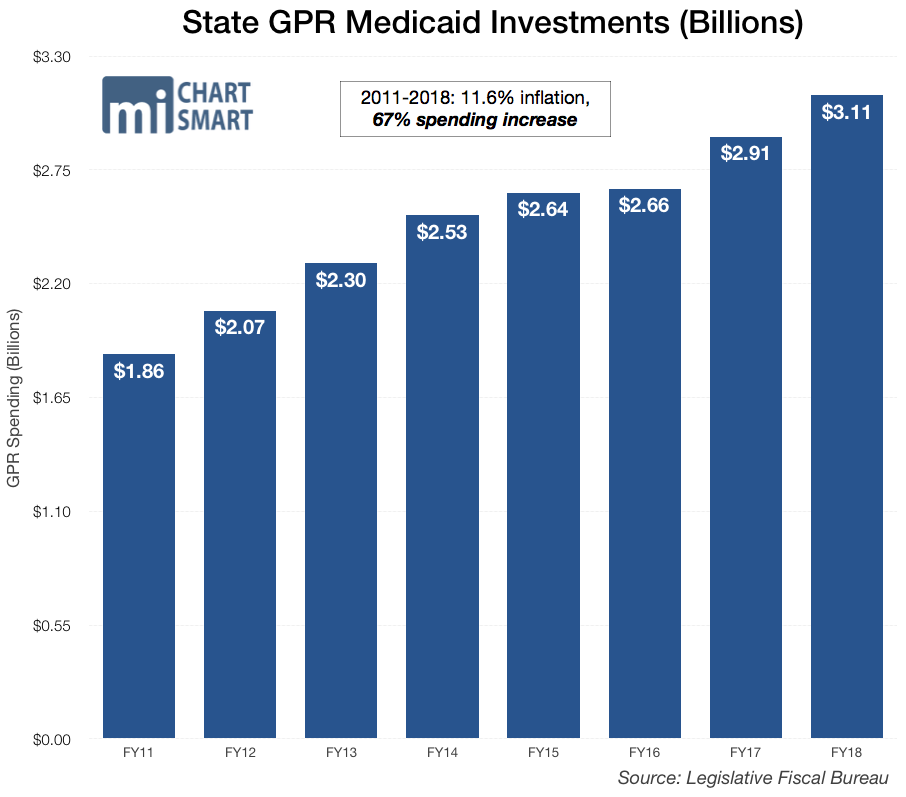 Rep. Shannon Zimmerman (R-River Falls) warned his finance committee colleagues that there is no such thing as “free money” from the federal government. Democrats fail to acknowledge all the strings attached in the Medicaid expansion string that holds Evers’ budget plan together, he said.

“We disagree with throwing more money at a broken or dysfunctional system. That is not the answer,” Zimmerman said.

Committee Democrats decry the fact that Wisconsin is one of only 14 states that hasn’t taken the additional money. But Republicans say there is good reason to decline.

Medicaid expansion has been a costly proposition for states that have accepted it. Medicaid spending in Ohio, for example, skyrocketed 35 percent in four years – from $18.9 billion to $25.7 billion between fiscal year 2013 and 2017. And in Minnesota, premiums increased 50-67 percent, forcing the state to implement a reinsurance program costing taxpayers at least $800 million so far.

Premiums headed into 2017 were expected to increase by a staggering 50-67 percent, as opposed to Wisconsin’s 16 percent hike. As a result, Minnesota was forced to come up with $300 million to bail out 123,000 struggling Minnesotans who did not qualify for federal Obamacare subsidies.

The bloodletting of Minnesota taxpayers didn’t stop there. The following year, the Minnesota legislature spent an additional $542 million to establish a reinsurance program to hold down costs.

Former Minnesota Gov. Mark Dayton, a Democrat, in 2016 told reporters, “The reality is the Affordable Care Act is no longer affordable to increasing numbers of people.”

But the Affordable Care Act, aka Obamacare, Republicans on the finance committee say, is what the country is stuck with. Still, they prefer Obamacare’s private sector health care exchanges to a government-run insurance program. They point to plans on the market as low as 15 cents a month with a $50 annual deductible, thanks to federal subsidies. Why move consumers on the exchanges to a more costly Medicaid system with its low reimbursement rates when the private marketplace is covering them more efficiently and effectively?

Sen. LaTonya Johnson (D-Milwaukee) said if a health plan costs mere cents, it’s probably not good. In fact, such plans are offered through Common Ground, the darling of the Obamacare health care cooperatives that taxpayers propped up with tons of subsidized loans and giveaways.

JFC Democrats pointed to polling that shows 70 percent of respondents want the state to take the federal money through the Medicaid expansion. They worked in, often clumsily, their new budget battle war cry, that Republicans were pushing the “politician’s budget,” not the “people’s budget,” as Evers calls his spending plan. Rep. Chris Taylor (D-Madison) insisted that people from around the state came to JFC budget hearings “begging us to adopt the provisions of this budget.”

“Folks voted for a change in November,” the governor said in a press release following Thursday’s vote. “They want us to bring Wisconsin’s federal tax dollars back into our state to invest in healthcare for all Wisconsinites and they want to see Democrats and Republicans work together to get it done.”

Evers said he has not yet begun to fight, having previously indicated that he would veto any budget that didn’t include the Medicaid expansion. Rejecting the federal Medicaid money would punch a $1.4 billion hole in Evers’ proposed budget, according to the Legislative Fiscal Bureau. That analysis, however, exposes how fragile Evers’ plan is, and disregards the fact that fiscally conservative budgeting could quickly fill that hole by prioritizing truly necessary spending initiatives.

Republicans said they want the same things their colleagues on the other side of the aisle want – accessible, affordable health care for all. They just believe in a different way of getting there. Rep. Mark Born (R-Beaver Dam) said Democrats want the people of Wisconsin to believe the only way to have affordable, accessible health care “is to have it be a welfare program, to be government-run, to have the taxpayers pay for it all.”

Left wants you to believe the only way to have affordable, accessible health care is to have it be a welfare program, to be government-run have, to have the taxpayers pay for all of it." – @Mark @repborn #wiright #wipolitics

Other items eliminated in the non-fiscal policy item purge:

Senate Majority Leader Scott Fitzgerald applauded the budget committee’s decision to cut the non-fiscal items, which, by the way, is nothing new for the JFC. The committee trimmed more than 80 such provisions out of Walker’s last budget proposal.

“The governor’s proposed budget was built on sand. It spent too much, taxed too much, and resulted in a nearly $2 billion structural deficit,” Fitzgerald said of Evers’ spending plan. “Today, Wisconsin Republicans took the first step in protecting taxpayers and eliminated over $1 billion in tax hikes proposed under the governor’s spending plan.”

Notably missing from Thursday’s proceedings was JFC co-chair Alberta Darling (R-River Hills), who was recovering from a recent fall.

“The good news is she is well on her way to being back with us. We hope to have her back to us soon,” her co-chair and friend, Rep. John Nygren (R-Marinette) said before the committee began budget work.